Women take off with Pan Am on AXN Beyond | Inquirer Lifestyle ❮ ❯

Women take off with Pan Am on AXN Beyond

SINGAPORE – There was a time when air travel itself was as exciting as the destinations, and passengers actually dressed up to fly. But that was also the same era that a woman’s ‘place’ or ‘role in society’ was deemed to be at home amongst marriage, children and chores.

Then, the Jet Age dawned upon the 1960s to usher in a new ‘breed’ of women in America. With the world at their feet – actually 30,000 feet under – the stewardesses of the iconic American airline Pan Am were among the first women to see the world like never before, when many others, including men, were not privileged enough to. Personifying glamour, style, freedom and empowerment, these women took control of their own destinies and their lives truly took off into the friendly skies, inspiring a whole generation of men and women.

Welcome to 1963, the start of a unique period in history brought back to life in the glossy and stylishly retro TV drama series Pan Am to chronicle the lives and loves of its aircrew. Premiering on February 11 and airing on Saturdays at 9:50 p.m. first and exclusively on AXN Beyond, Pan Am will follow these lucky first few who could fly regularly on board the world’s largest and most prestigious airline to a truly global adventure. 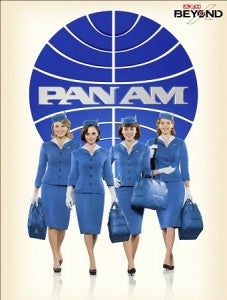 The drama series is led by Emmy winner Christina Ricci (Grey’s Anatomy) as Maggie Ryan, the purser on board Pan Am’s new Clipper Majestic jet. Having climbed step-by-step up the social ladder to a better life and great opportunity, the resourceful, ambitious but stubborn Maggie is finally riding high and is determined not to fall. She works with the resilient and selfless French native Colette Valois (Karine Vanasse, Midnight in Paris) who has an innate understanding of international affairs, but is a searching wanderer when it comes to affairs of the heart.

Also part of the clique is the competitive rebel Kate Cameron (Kelli Garner, The Aviator) who left her sheltered life in East Granby, Connecticut to brave the world. Now, she must also navigate espionage and intrigue by becoming an international agent for the CIA. Running off on her wedding day, Kate’s enthusiastic, adventurous yet naïve younger sister, Laura Cameron (Margot Robbie, Neighbours) left her past behind to join Kate in a bold move that could bring serious personal consequences.

Piloting the Clipper Majestic on its maiden flight is the charming, industrious but proud Dean Lowrey (Mike Vogel, Cloverfield) who is newly promoted to captain and would not trade this moment for the world. The self-assured and flirty First Officer and Co-Pilot Ted Vanderway (Michael Mosley, Scrubs) is a former Navy test pilot who finds the commercial skies as turbulent as he struggles to overcome past mistakes and prove his worth as an aviator. And as the latter finds out, the ladies flying on Pan Am are different from the rest, “I’ve hit on enough of these girls to know that they’re not like normal women… They are a new breed of women.”

Despite mandatory weigh-ins before flights, grooming inspections and wearing of girdles, Maggie, Kate, Laura and Colette enjoy independence and liberation that was unheard of at that time complete with romantic liaisons, social engagements and a career of their choosing. Most of all, the international travels open their eyes to the world. Viewers will go with Maggie and her crew to new destinations each week including dream cities as London, Paris, Berlin, Monte Carlo, Rome and even Asia’s own Jakarta of half a century ago, re-created in the series.

Along the way, enjoy front-row seats to history in the making, as they witness former US President John Ford Kennedy’s visit to Berlin in 1963 and the arrival of British band The Beatles in New York in 1964…

Indeed, Pan Am will serve up authentic re-creations of the workings of Pan Am in the 60s: from serving seven course meals complete with turtle soup and caviar; to stewardesses playing board and card games with passengers; and a stewardess who was actually recruited to be a CIA operative. The series is executive produced by Nancy Hult Ganis (Akeelah and the Bee), a former Pan Am stewardess who added to her own experiences through extensive research and interviews with other ex-staff. Capturing the essence of the Jet Age, Pan Am has won over many critics including American daily Los Angeles Times’ high praise, “this is as good as it looks, and it looks very good.”

Among the first to be “beautiful, educated and trilingual”, the high flying women of Pan Am are set to take off with you on the captivating new TV drama series into the dreamy and swinging sixties this February. So, buckle up; adventure calls! And thank you for choosing Pan Am on AXN Beyond.

Pan Am premieres February 11 and will air first and exclusively on AXN Beyond Saturdays at 9:50 p.m. in Singapore, Malaysia, Philippines. Hong Kong and 8:50 p.m. in Jakarta. (advt)