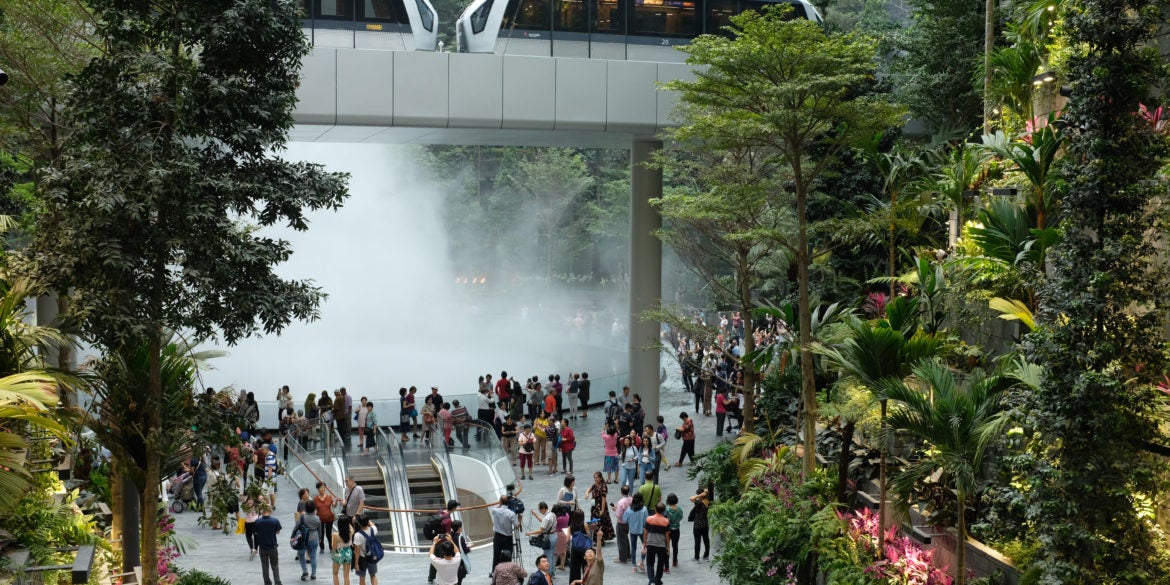 SINGAPORE — If you think the world’s best airport could no longer outdo itself more than it already has, you’re wrong.

Changi Airport’s latest attraction, Jewel, will fully open its doors to the public on April 17 after four years in the making. This new lifestyle destination connects three of Changi Airport’s four terminals.

Its centerpiece is the 40-meter indoor waterfall, the tallest in the world. The water cascades from an oculus in the glass roof that flows down to the basement. This HSBC Rain Vortex can be viewed from multiple locations and angles around Jewel.

While the waterfall is already Instagrammable by day, be prepared to be mesmerized with the sound and water-light show every hour from 8:30 p.m. to 12:30 a.m.

Another feature that sets it apart from usual malls is the four-storey garden with a collection of more than 2,000 trees and palms, and over 100,000 shrubs from different parts of the world.

“Jewel demonstrates the potential for urban centers that offer the vitality of the traditional city or galleria within a park setting. The Jewel toroidal inverse dome creates a new kind of spatial experience, a daylit vast landscaped garden, combined with seven levels of shopping and airport facilities,” Safdie said.

In June, Jewel will unveil the Canopy Park, a sprawling space at the topmost level of the mall for the young and playful ones. It features a suspended bridge with a glass flooring, bouncing nets, a mirror maze and Discovery Slides. On one side of the park is the Cloud9 Piazza, an events space that can accommodate 1,000 guests.

Jewel offers a wide range of international and homegrown brands. Among the spots to watch out for are Burger & Lobster and Shake Shack, both firsts in Southeast Asia; Shang Social, Shangri-La Hotel’s first non-hotel establishment; and ice cream at Emack and Bolio’s, the first in Singapore. American fastfood chain A&W is also making a comeback to Singapore after more than a decade.

It also houses Pokemon Center, the first official store outside of Japan; as well as Nike’s largest store in Southeast Asia.

Singapore’s famous chili crab is a must try for travelers. No need to go far because Jumbo Seafood will give you a taste of Singapore’s breadth of gastronomic tradition.

Diners can also check out how their meals are being prepared because some restaurants have glass-fronted kitchens.

“It is our vision for Jewel to be a destination like no other. Our thoughtfully curated tenant mix reflects Jewel’s aspiration to be a place where ‘The World Meets Singapore, and Singapore meets the World.’ Jewel gives Singapore residents access to top global brands, while providing international travellers the opportunity to being home a piece of Singapore,” said Tan Mui Neo, head of leasing, Jewel Changi Airport Development.

Travelers may opt to stay at the only hotel inside Jewel, the Yotelair, the first in Asia. It features 130 rooms, which can be booked for a minimum of four hours to overnight stays. But those who do not want to check-in may also access the showers and gym for a fee.

This new hotel is an addition to the existing one within Changi Airport, the Crowne Plaza, which has been named as world’s best airport hotel by Skytrax for five consecutive years.

Passengers may also avail of the early check-in lounge for 26 airlines, baggage storage services and a sleeping lounge. With so much fun activities and dining options to choose from, travelers and visitors may need more than a day to explore the whole site.

This new expansion is a destination in its own right both for travelers and locals. It was built to attract more tourists and visitors and to stay ahead as the preferred stopover destination for passengers.

Changi Airport is rated as the world’s best airport for seventh year in a row by Skytrax, a London-based airline and airport audit organization. It is also the seventh busiest airport for international traffic, with 65.6 million passenger movements in 2018. /je