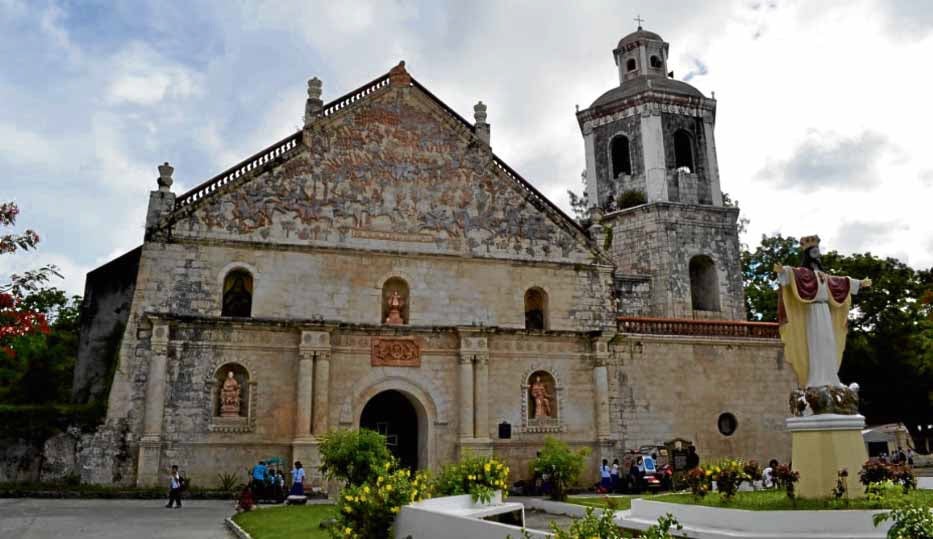 Completed in 1869, the church of San Joaquin town in Iloilo province, touted to be the country’s most militaristic due to the bas relief on its pediment depicting the Battle of Tetuan in Morocco in 1859 to 1860, is celebrating its 150th anniversary this year.

This church, under the advocation of San Joaquin or Saint Joachim, father of the Blessed Virgin Mary, replaced the older one dedicated to the “Dulce Nombre de Jesus” (Sweet Name of Jesus), described by Augustinian priest Manuel Buzeta in the mid-19th century as “mediana fabrica,” or not in good condition.

The state of the older church most likely necessitated the construction of the new edifice spearheaded by Augustinian Fr. Tomas Santaren from 1856 to 1869.

The current church made from coral stones has a sprawling convent with a big oval well and kilns for baking bread.

The convent suffered major damage during World War II, while the upper two stories of the church belfry collapsed during the infamous “Lady Caycay” earthquake of 1948. The belfry was later reconstructed.

Starting from the 1970s, the church had undergone renovations, with the additions of cement on its side walls and apse, height adjustments on its side walls, repair of the damaged belfry, replacement of its colored floor tiles, and “restoration” of its stone retablo mayor with carved images of San Pedro and San Pablo, among other interventions—a number of which remain, according to conservation experts, questionable.

The most unique feature of the church is the bas relief on its facade titled “Rendicion de Tetuan,” which depicts the aforementioned Battle of Tetuan in Morocco in the 19th century.

The recently released Cultural Center of the Philippines (CCP) Encyclopedia of Philippine Art describes the “Rendicion” as “a manifestation of Santaren’s patriotism.”

The war was triggered by the raid by Moroccan tribesmen of a Spanish garrison on the outskirts of Ceuta in 1859. The Spanish retaliated by attacking and taking over Tetuan. Morocco sued for peace.

The CCP Encyclopedia notes that in the San Joaquin church, “local imagination was used in delineating soldiers and horses, as if they were characters from a moro-moro drama, interspersed with local flora and fauna.” 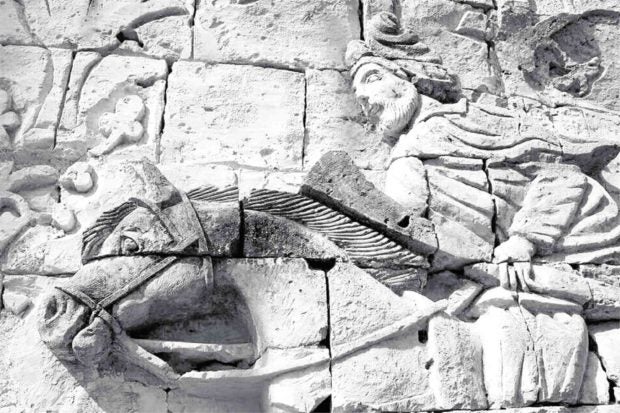 Also, upon closer inspection, the soldiers’ faces are revealed to be not entirely European, as there are some who are oriental-looking.

Design motifs also include flowers, palms and fruit-bearing trees, festoons, and at least one bird which resembles an eagle.

An interesting feature of the facade is the image of San Pedro Regalado in the middle niche, a Franciscan saint in an Augustinian church.

Church historian Regalado Trota Jose explained the possible reason the image of a Franciscan saint was included in an Augustinian church. He said Santaren and San Pedro Regalado had both hailed from Valladolid, Spain.

“The image of San Pedro Regalado in San Joaquin is the only one I’ve seen in Philippine imagery,” said Jose. He described it as “beautiful.”

“He is portrayed in an ecstasy, borne by angels, just like in his church in Valladolid,” he added.

San Joaquin was founded by the Augustinians as an independent town in 1793, but its beginnings can be traced back to the 16th century, when it became a Spanish encomienda under a certain Esteban de Figueroa.

Buzeta also mentioned the town having agricultural products such as rice, corn, beans, cotton and fruits, with lands watered by the Bayonan (Bayunan) and Sauragan (Siwaragan) rivers.

In 2008, San Joaquin celebrated its 100th anniversary as a reconstituted town after it was separated from Miag-ao—its visita in the late 17th century—in 1910.

Aside from its church complex, other Spanish colonial structures in the town include its famed Campo Santo, five stone bridges, and at least two watchtowers—one in ruins, and one demolished sometime in the 1950s.

The recent sesquicentennial celebration was marked by various activities such as a fun run, youth camp and, surprisingly, beauty contests. —CONTRIBUTED