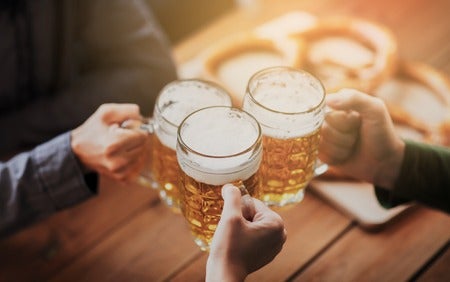 Faking a smile at work linked to heavier drinking — study

Those who fake happiness and smiling in front of customers may be at risk for heavier drinking, as per a new study published in the Journal of Occupational Health Psychology.

Researchers from Penn State University in Pennsylvania and the University at Buffalo in New York, United States found that those who force themselves to smile and be happy in front of customers may be at risk for heavier drinking after work.

The researchers studied the drinking habits of people who routinely work with the public, such as nurses, teachers and those in the food service industry, according to Penn State’s news release on April 10. They used data from phone interviews with 1,592 workers in the U.S. via a larger survey funded by the National Institutes of Health.

In their study, the researchers found a link between those who faked positive emotions or suppressed negative emotions and heavier drinking after work.

“Faking and suppressing emotions with customers was related to drinking beyond the stress of the job or feeling negatively,” Alicia Grandey, a psychology professor at Penn State, was quoted as saying. “It wasn’t just feeling badly that makes them reach for a drink. Instead, the more they have to control negative emotions at work, the less they are able to control their alcohol intake after work.”

Smiling at work may ostensibly seem like a positive thing, but as per Grandey, doing it all day can be taxing. The faking or suppressing of emotions was termed as “surface acting” in the study.

“In these jobs, there’s also often money tied to showing positive emotions and holding back negative feelings,” she said. “Money gives you a motivation to override your natural tendencies, but doing it all day can be wearing.”

They also found the connection between surface acting and drinking after work was stronger among those who are impulsive or lack personal control over behavior at work, as per the report. There was also a stronger association between surface acting and drinking among employees who worked in jobs where they only get one-time encounters with customers, such as in call centers or cafes.

“Nurses, for example, may amplify or fake their emotions for clear reasons,” said Grandey. “They’re trying to comfort a patient or build a strong relationship. But someone who is faking emotions for a customer they may never see again, that may not be as rewarding, and may ultimately be more draining or demanding.” Cody Cepeda/NVG