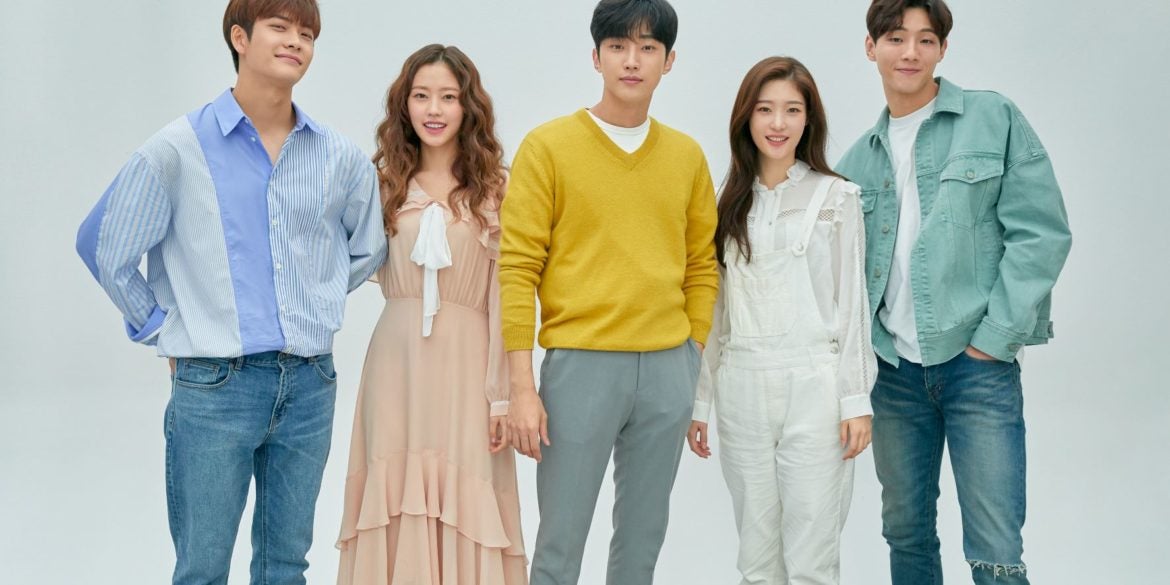 SEOUL—It’s springtime and the city’s cherry trees are blooming. In the middle of all the promises of a new beginning are Jisoo, Jinyoung and Chaeyeon and the new Netflix Original series that they are starring in.

“My First First Love” is a coming-of-age South Korean drama about five friends experiencing things for the first time. Tae-oh (Jisoo) moves into a house he inherited from his grandfather.  He intends to live there on his own, but his friends appear at his house one day asking him to let them stay there as well.

Song-i (Chaeyeon), his friend for the past 20 years, is one of them. They are not involved with each other romantically. However, it makes him uncomfortable that she has romantic feelings towards his college best friend, Do-hyeon (Jinyoung).

“(My character) Tae-oh is free-minded, endearing but sometimes stupid,” said Jisoo during a press conference in Conrad Hotel,  April 12.  “I am the first love in the series and Do-hyeon is the last.”

Director Oh Jin-seok said that he knew that Jisoo can portray a serious role so well.  But he knows that he is capable of portraying a cute character as well.

“He also has this adorableness, like a puppy. And I always felt like he’s a very charming character when he smiles,” Director Oh said.  Taking this as a cue and with the host’s prompting, Jisoo breaks into a huge, charming smile.

The director also said that “My First First Love” is based on the web drama Jung Hyun-jung created.  Writer Kim Ran worked closely with Jung Hyung-jung for a long time and at the beginning of the shoot.  But Kim developed the story for the Netflix version.

The title of original web drama is “Because it’s the First Time” (2015). It stars SHINee’s Choi Min-ho.  The characters’ names are the same. The setup of Tae-oh owning a place of his own that his friends invade is the same. But the similarities end there.

Everything about the series is fresh and new.  It follows a new story and plotlines. Director Oh said that they changed everything except for the element of five youths living in a shared house.

IOI and DIA member Chaeyeon is the center of the brewing love triangle.  She describes her character Song-i as someone who is going through a lot of things but manages to keep her chin up.

“Tae-o and Song-i have been friends for a long time and Do-hyeon is a new guy. Despite the fact that Do-hyeon is someone new, Song-i might feel more comfortable around him.  Because from the very beginning, she shares her most embarrassing moments with him. Song-i’s long-time friendship with Tae-o ironically can be a barrier between them,” she said describing the relationships of her character.

Playing Tae-oh’s best friend and Song-i’s crush is Jinyoung. The talented composer and actor said that he wanted to be a part of this series because it does not sugar-coat romance. Instead, he said that it shows what first love is like for those in their 20s.

“Do-hyeon, whom I play, is very clumsy with first love, but he has an attractive quality as he expresses his feelings truthfully to the girl he likes,” Jinyoung said.

Director Jin-seok, on the other hand, said that he picked Choi Ri to play Garin and Kang Tae-oh to play Hun based on the chemistry between the two. He said that he chose them because there are a subtle cuteness and whimsical quality between them.

The series will allow viewers to see a different side to the actress Choi Ri.  You might remember her as the evil cousin of Eun-tak in “Goblin”. But in my “My first first love,” her character in the series is very positive. Her co-stars even said that she cheers everyone up.

“She comes to me to practice together.  When we had some questions and doubts in mind about the script, we were able to talk about it freely anytime. So I was able to learn a lot from Choi Ri as an actor. It was such a good experience,” Kang Tae-oh said.

Director Jin-seok defines what makes “My First First Love from other romance stories different from other stories.  He said that they did not try to forcefully add artificial encouragement to the love story.  The strategy will allow viewers to just watch and enjoy the blooming romance.