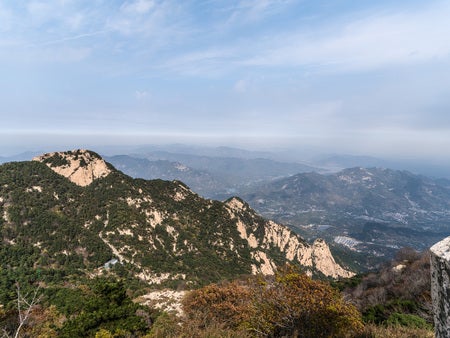 Scenic view at the peak of the Mount Tai in Shandong, China. Image: INQUIRER.net stock photo

One man from Jiangsu, China, defied the odds and climbed the scenic Mount Tai in Shandong despite losing the use of his legs to childhood polio.

Thirty-three-year-old Wang Cunwei embarked on his snowy, 23-hour-long climb last Wednesday, April 10, according to the Metropolis Morning News via the South China Morning Post on April 15.

Wang was determined to make his climb a success and prepared 12 pairs of gloves, four sets of knee pads and dozens of warming pads. As per the report, he was joined by three relatives up the path of Mount Tai in the morning of April 10.

He didn’t falter and continued on with his climb of the mountain, tearing his trousers and tattering his shoes along the way. He also got caught in the snow the following day, prompting one tourist to offer his jacket to Wang.

“I felt much warmer afterwards, but then the coat became very heavy because of the snow,” Wang said in the report. “I had to take it off again to be light for climbing.”

His uphill climb, literally and metaphorically, was not for naught, however, as he received the support of many. He eventually reached the highest point of the mountain, called the South Gate to Heaven, after climbing over 1,500 meters.

“Many visitors encouraged me and helped me overcome difficulties,” Wang was quoted as saying. “We need to take a good rest after no rest for one day and one night.”  Cody Cepeda /ra