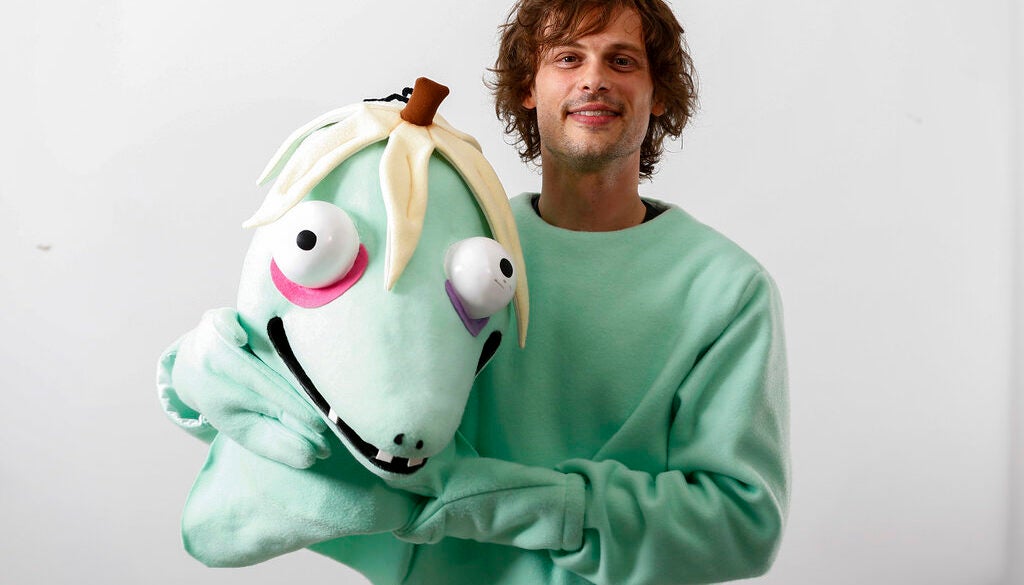 This April 1, 2019 photo shows actor and author Matthew Gray Gubler poses for a portrait in New York wearing a costume of his title character in his children's book "Rumple Buttercup: A Story of Bananas, Belonging and Being Yourself." (Photo by Brian Ach/Invision/AP)

Why actor Matthew Gray Gubler is dressed in a monster suit

NEW YORK — You have to hand it to actor Matthew Gray Gubler: When he goes, he goes all-in. That’s whether he’s chasing serial killers on CBS’ “Criminal Minds” or putting the word out about his new children’s book.

To publicize “Rumple Buttercup: A Story of Bananas, Belonging and Being Yourself,” Gubler donned a full-body, sweaty costume of his character, a peculiar green monster who disguises himself under a banana peel.

“I love life so much and I want to try to do everything, whether or not I do it well I don’t know,” he says. “But I am sitting here in a 7-foot-tall monster costume, so I’m feeling pretty good about myself.”

The story centers on the lonely Rumple Buttercup, who hides from the world because he has crooked teeth, three hairs and an asymmetrical body. He hides because he fears he’s weird.

“I sort of wrote the book for anyone that feels like they don’t quite fit in. Because I want them to know that they’re not alone and that everybody feels weird because everyone is weird. And that’s ultimately I think what makes us great,” Gubler says.

Gubler didn’t just dream up the monster for the 136-page book. He also drew every squiggly line and hand-lettered every word, even the barcode and legal language. He made the drawings with melted crayons, pastel and charcoal.

“I wanted the book to really feel like it was handmade because it legitimately was,” he says. “Any art form that I look at or appreciate, whether it’s dance or movies, I love when you can feel the seams because it feels like it was just made. You know it’s not perfect and, like the theme of the book, no one is perfect and that’s ultimately what makes us special.”

The book must have touched a nerve because it made its debut at No. 1 on The New York Times’ children’s middle grade best-seller list. More is on the way: Gubler revealed another children’s book in the pipeline.

Mallory Loehr, who leads Random House Books for Young Readers Group, says her team was so enamored of the book that several editors first met Gubler wearing banana peels on their heads.

“He is a true artist. As much as he’s a fabulous actor, his heart is here,” Loehr says. “It was a very intense experience because he is an intense person and because he wants perfection and because he cares a whole lot. But the proof is in the pudding.”

On TV, Gubler is best known for playing Spencer Reid, a brilliant member of an elite FBI behavioral analysis team, tracking down unknown subjects — or “unsubs” — for 14 seasons. Reid shares some similarities with Rumple Buttercup — both are sensitive outsiders yearning to connect and offer their gifts to the world. “I’m very protective of him and Rumble — those are like my two guys,” says Gubler.

Over the years, Reid onscreen has been shot in the leg and neck, stabbed himself in the thigh, and was once arrested on trumped-up murder charges in Mexico. “My character has been the perpetual damsel in distress since Season 1,” Gubler says.

The show will wrap up its run with a final Season 15 later this year and Gubler, who has directed 13 episodes over its life, thinks the moment will be bittersweet. He’ll miss the cast and crew but is ready for new challenges.

“It’s kind of like if you went to your grandfather’s 115th birthday and then the next day he passed away. You’d be very sad but you’d also say, ‘Hey, he had an incredible life. He lived so long. May we all get to know those joys.'”

Gubler basically stumbled into acting after having earned a degree in directing from New York University’s Tisch School of the Arts. He landed a role in Wes Anderson’s “The Life Aquatic With Steve Zissou” and quickly got the “Criminal Minds” gig. He also paints, directs music videos, provides the voice for Simon in “Alvin and the Chipmunks” and models. It all doesn’t fit neatly and that’s the point.

“I just see it as different tentacles off of the same deranged octopus,” he says.

He helped make Reid more than just an Urkel-like figure on “Criminal Minds.” Producers initially wanted him to be true geek wearing a pocket protector, but Gubler declined.

“I was like, ‘What if he’s not like a quote-unquote ‘nerd’? What if he’s just smart? And I think that’s cool,'” he said. “As someone that was somewhat ostracized as a kid for being different or good at certain things and books, I like to think that those people are now hopefully becoming heroes.”

As for saying goodbye to Reid, Gubler hopes he and the rest of the Behavioral Analysis Unit will keep going. He doesn’t want them to quit, disband or die.

“I hope it’s not an ending where it’s like, ‘Oh well, we did that. Let’s all retire.’ I hope it’s just ‘Wheels up!’ I hope it’s like, ‘Let’s do another one.’ I want people to perpetually hope that people are out there for the good of mankind stopping serial killers.” MKH