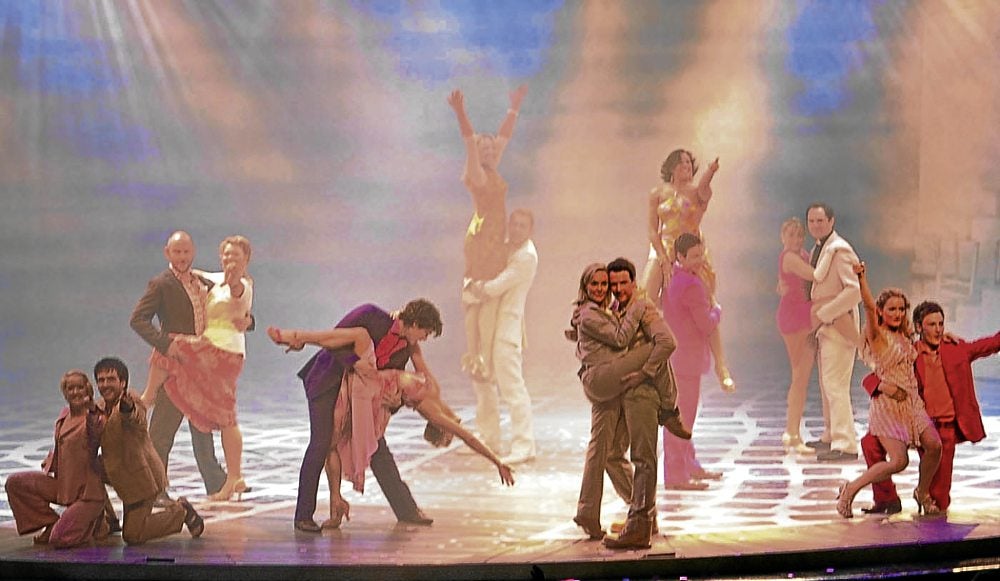 “Mamma Mia!” has finally landed on Philippine shores. Those who love the infectious music of ABBA, ’70s mega icon, will feel the most rewarding treat of all with the Cultural Center of the Philippines (CCP) raising the curtain on this international hit, “Mamma Mia!”

Humility aside, I had seen the musical for the first time during its original run at London’s West End. Then I saw it on Broadway in New York; then in Melbourne, Australia; and last October in Manchester, England.

The entire Manchester cast is now here in Manille to rock us out of our seats, dahlings, and indeed it did so during the special Gala Night, hosted by  Concertus Manila, that made us all relive the 1970s hits of the Swedish group ABBA.

Disco balls hung from the ceiling of the CCP lobby, as hot disco themes brought back memories of the disco era, while we sipped our cocktails before the prompt start of the 8 p.m. show.

Event presenter was the world-renowned Citi who invited some of their most valued clients, who joined top personalities and celebrities to get into the “Dancing Queen” fever, dahlings.

More than just a musical treat, the gala of “Mamma Mia!” was an awesome experience for two lucky Citibank cardholders, who won tickets to watch the show with a car service to the CCP to boot.

Philip Austria, who came with wife Maricel, and Eduardo Garcia, with sister Edwina, won via an electronic raffle for cardholders who used their rewards points at Citibank partner-establishments.

“It is truly rewarding to enjoy great treats like this that I can share with a loved one,” Philip A., a guidance counselor and Citibank cardholder for three years, told us.

For Eduardo, the chance to watch “Mamma Mia!” “is a once-in-a-lifetime opportunity, being among the crowd to experience this international musical, will forever be cherished by me and my sister, who just couldn’t wait to watch the show,” he said enthusiastically.

It would give you the feeling of being truly part of the whole fun, romantic comedy. It would shoot your adrenaline up.

We were transported to a beautiful island in Greece to witness a story filled with love and music. The story is about a daughter’s quest to discover the identity of her father.  On the eve of her wedding, she brings together three men from her mother’s past to the island they last visited 20 years ago.

During the three encores, people danced and clapped with the performers. The full-house crowd let their hair down and had a totally great time.

Over 50 million people around the world have seen the show, which has grossed over $2 billion worldwide since its 1999 debut.

You just have to go and see this phenomenal happening, and find out who the true father of the bride to be is, n’est ce pas?

“Mamma Mia!” will run at the CCP Main Theater until Feb. 19.

Après the show, while waiting in the lobby for the car to arrive, moi chatted with a high-profile, eye-catching beauty in her fifties but looking 20 years younger.

She told me how she loved the show because she could relate to it.

“Well, when I was in college abroad, I had a super love affair with another student who was from Manila. When I got back here, I then had two other boyfriends at the same time without any of them knowing what I was doing behind their backs. But as faith would have it, I ended up marrying my boyfriend while we were abroad.”

“I’m happily married and I love my kids, but I still bump into the two others during social functions,” she said. “They still flirt with me, and I do the same,” she laughed.

“But watching this show,” she added, “I should write a book and call it ‘Papa Mia!’”

Naturellement, we both cracked up laughing.