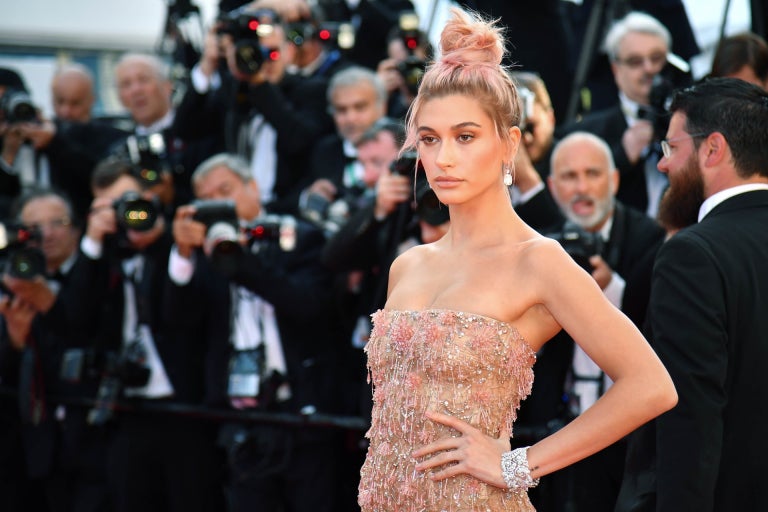 US model Hailey Baldwin poses as she arrives on May 12, 2018 for the screening of the film "Girls of the Sun (Les Filles du Soleil)" at the 71st edition of the Cannes Film Festival in Cannes, southern France. / AFP PHOTO / Alberto PIZZOLI

Is Hailey Bieber working on a beauty line?

Hailey Bieber has sparked rumors that she could have a beauty brand up her sleeve.

The model — who was previously known as Hailey Baldwin — appears to have big plans for her new name. According to TMZ, the star’s company has filed trademark paperwork for the name “Bieber Beauty”, with the intention of creating a beauty and cosmetics brand. The move follows an application the model filed last September 2018 to trademark the name “Hailey Bieber”, having married pop star Justin Bieber last year.

Bieber is no stranger to beauty product design; she has teamed up with the Australian label ModelCo in 2016 for a collaborative 22-piece makeup collection, spanning everything from beauty balms to lip lacquers. Her modeling career has also gotten her in campaigns for beauty brands BareMinerals and L’Oreal Professionnel.

The beauty line would be the latest in a string of career coups for the 22-year-old model, who was unveiled as the face of fast fashion retailer PrettyLittleThing last fall and named a global ambassador for the label Tommy Hilfiger back in May 2018. Meanwhile, husband Justin has also been flexing his fashion muscles, having launched Drew House, his debut clothing line, back in January.

Celebrity beauty lines have become a major industry trend over the past few years, with stars such as Kylie Jenner, Kim Kardashian and Rihanna leading the way with their hugely successful cosmetics ventures.

So far, this April, supermodel Ashley Graham has unveiled a new makeup collaboration with Revlon, while Hollywood star Michelle Pfeiffer has announced the launch of her new fragrance brand. CE/JB