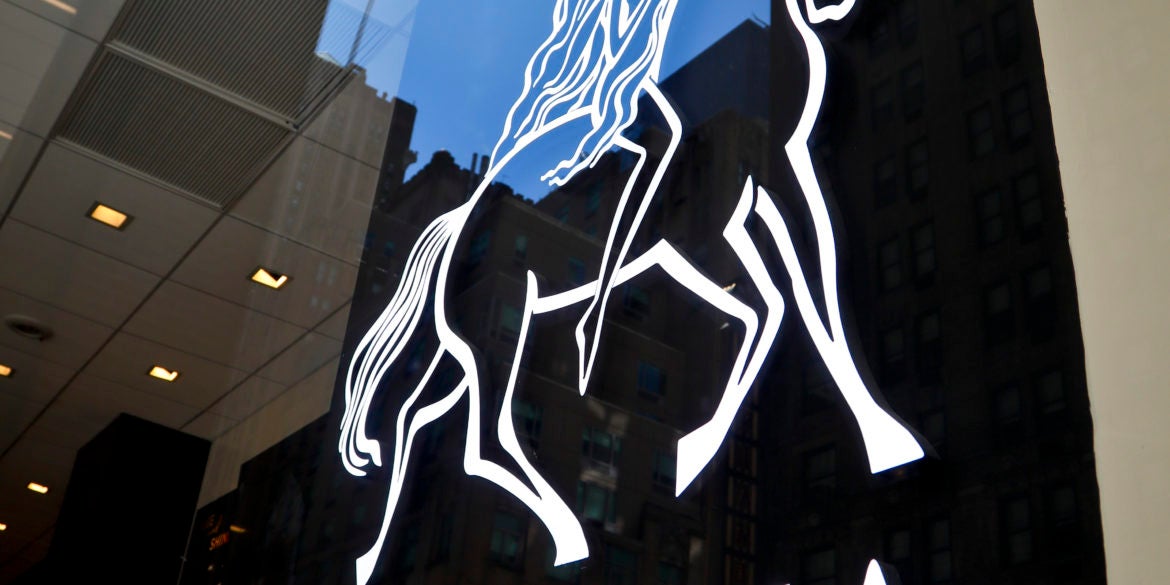 Godiva's logo stands out on the window of a new cafe in New York, Tuesday April 16, 2019. Godiva, the private Belgium chocolate maker, is looking beyond its iconic gold gift box of chocolates. Some of the traditional stores will be converted into cafes, but it is looking beyond malls and will also have stand-alone storefronts and airport locations. (AP Photo/Bebeto Matthews)

NEW YORK — Godiva is looking beyond its iconic gold gift box of chocolates.

The Belgium confectioner is rolling out 2,000 cafes over the next six years that will serve a complete menu of items like the croiffle, a croissant and waffle hybrid that’s stuffed with fillings like cheese or chocolate and pressed on a waffle iron. Other items include an expanded list of coffees and a new collection of teas as well as grab-and-go items like sandwiches and yogurt parfaits.

The cafes mark Godiva’s foray into prepared meals. The first one officially opens in Manhattan Wednesday and is part of an ambitious growth plan spearheaded by CEO Annie Young-Scrivner, who took over Godiva’s helm in 2017 after serving as a top executive at Starbucks. Her goal: to increase its revenue fivefold by 2025.

The company, privately owned by Turkish Yildiz Holding AS, doesn’t report sales or profits but according to reports, Godiva was about a $1 billion business in 2017. It expects 40% of its total sales to come from the cafes in the next five years. One-third of the new cafes will be in the U.S.

Godiva sees big sales opportunities in Asia and the Middle East, where shoppers prefer to sit down to eat instead of grab-and-go options, according to Young-Scrivner.

Currently, the confectioner operates about 800 stores in 105 countries. But the fare is limited to boxed chocolates, chocolate-covered strawberries, ice cream and drip coffee.

Godiva wants to be more than just a gift choice for Valentine’s Day or the holidays.

“We really have a stronghold on formal gifting but we want to expand to everyday consumption,” said Young-Scrivner in a phone interview with The Associated Press.

Some of the traditional stores will be converted into cafes, but Godiva is looking beyond malls and will also have stand-alone storefronts and airport locations. Young-Scrivner said she believes Godiva cafes will stand out amid the proliferation of other coffee outlets because of its heritage that goes back to 1926 as well as its top quality items.

Thierry Muret, executive chef chocolatier at Godiva, said he’s been testing food and drinks for the new menu for a year. He said it took eight months to get the right blend of coffee that would have the right undertones of chocolate, for example.

Each of the cafes will have the core menu but will be tailored to the international region’s tastes. Muret is also trying to balance consumer demands for freshly prepared food that doesn’t take too long to make.

“Everybody runs, no one has time in their lives. We wanted to respect that,” he said. “But we wanted to give Belgium goodness to people.” /kga