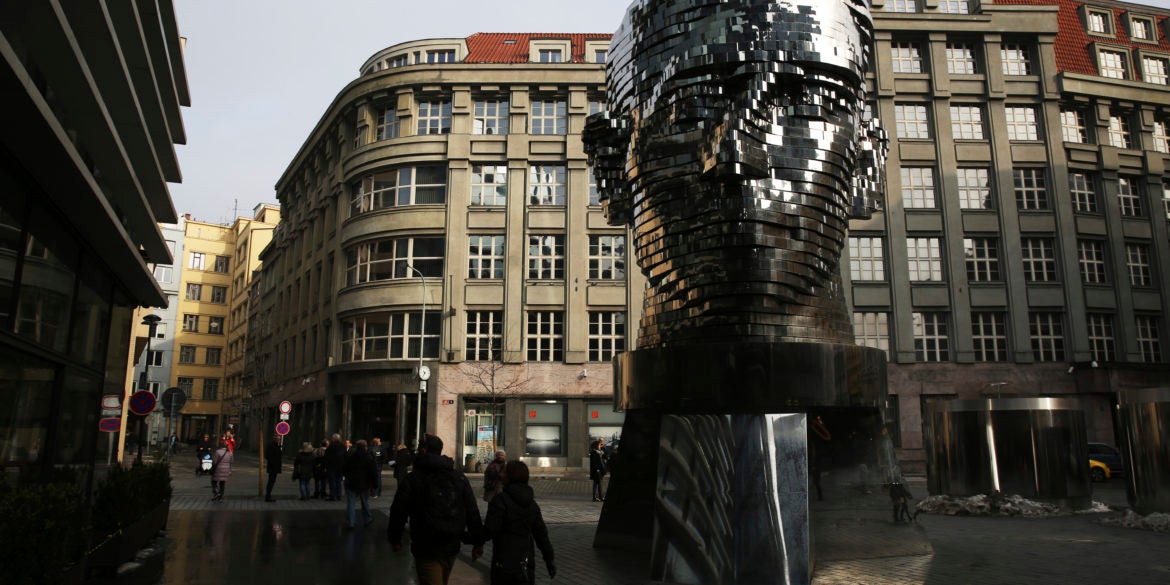 In this Feb. 4, 2017 file photo, tourists walk past a moving metal sculpture of writer Franz Kafka in his birth city of Prague, Czech Republic, on Saturday, Feb. 4, 2017. A long-hidden trove of unpublished works by Franz Kafka could soon be revealed following a decade-long battle over his literary estate that has drawn comparisons to some of his surreal tales. (AP Photo/Jon Gambrell, File)

Long-hidden Kafka trove within reach after series of trials

JERUSALEM (AP) — A long-hidden trove of unpublished works by Franz Kafka could soon be revealed following a decade-long battle over his literary estate that has drawn comparisons to some of his surreal tales.

A district court in Zurich upheld Israeli verdicts in the case last week, ruling that several safe deposit boxes in the Swiss city could be opened and their contents shipped to Israel’s National Library.

At stake are untouched papers that could shed new light on one of literature’s darkest figures, a German-speaking Bohemian Jew from Prague whose cultural legacy has been hotly contested between Israel and Germany.

Though the exact content of the vaults remains unknown, experts have speculated the cache could include endings to some of Kafka’s major works, many of which were unfinished when they were published after his death.

Israel’s Supreme Court has already stripped an Israeli family of its collection of Kafka’s manuscripts, which were hidden in Israeli bank vaults and in a squalid, cat-filled Tel Aviv apartment. But the Swiss ruling would complete the acquisition of nearly all his known works, after years of lengthy legal battles over their rightful owners.

The saga could have been penned by Kafka himself, whose name has become known as an adjective to describe absurd situations involving inscrutable legal processes. Kafka was known for his tales of everyman protagonists crushed by mysterious authorities or twisted by unknown shames. In “The Trial,” for example, a bank clerk is put through excruciating court proceedings without ever being told the charges against him.

“The absurdity of the trials is that it was over an estate that nobody knew what it contained. This will hopefully finally resolve these questions,” said Benjamin Balint, a research fellow at Jerusalem’s Van Leer Institute and the author of “Kafka’s Last Trial,” which chronicles the affair. “The legal process may be ending, but the questions of his cultural belonging and inheritance will remain with us for a very long time.”

Kafka bequeathed his writings to Max Brod, his longtime friend, editor and publisher, shortly before his death from tuberculosis in 1924 at the age of 40. He instructed his protege to burn it all unread.

Brod ignored his wishes and published most of what was in his possession — including the novels “The Trial,” ”The Castle” and “Amerika.” Those works made the previously little-known Kafka posthumously one of the most celebrated and influential writers of the 20th century.

But Brod, who smuggled some of the manuscripts to pre-state Israel when he fled the Nazis in 1938, didn’t publish everything. Upon his death in 1968, Brod left his personal secretary, Esther Hoffe, in charge of his literary estate and instructed her to transfer the Kafka papers to an academic institution.

Instead, for the next four decades, Hoffe kept the papers stashed away and sold some of the items for hefty sums. In 1988, for instance, Hoffe auctioned off the original manuscript of “The Trial” at Sotheby’s in London. It went for $1.8 million to the German Literature Archive in Marbach, north of Stuttgart.

When Hoffe died in 2008 at age 101, she left the collection to her two daughters, Eva Hoffe and Ruth Wiesler, both Holocaust survivors like herself, who considered Brod a father figure and his archive their rightful inheritance. Both have since also passed away, leaving Wiesler’s daughters to continue fighting for the remainder of the collection.

Jeshayah Etgar, a lawyer for the daughters, downplayed the significance of the potential findings in Zurich, saying they were likely replicas of manuscripts Hoffe had already sold. Regardless, he said the ruling was the continuation of a process in which “individual property rights were trampled without any legal justification.” He said his clients legitimately inherited the works and called the state seizure of their property “disgraceful” and “first degree robbery.”

Israel’s National Library claims Kafka’s papers as “cultural assets” that belong to the Jewish people. Toward the end of his life, Kafka considered leaving Prague and moving to pre-state Israel. He took Hebrew lessons with a Jerusalem native who eventually donated her pupil’s vocabulary notebook to the library. In recent years, the library also took possession of several other manuscripts the courts had ordered Hoffe’s descendants to turn over.

“We welcome the judgment of the court in Switzerland, which matched all the judgments entered previously by the Israeli courts,” said David Blumberg, chairman of the Israel National Library, a nonprofit and non-governmental body. “The judgment of the Swiss court completes the preparation of the National Library of Israel to accept entire literary estate of Max Brod, which will be properly handled and will be made available to the wider public in Israel and the world.”

Other scholars question Israel’s adoption of Kafka, noting that he was conflicted about his own Judaism. The German Literature Archive, for instance, has sided with Hoffe’s heirs and aimed to purchase the collection itself, arguing the German-language writings belong in Germany. Dietmar Jaegle, an archive official, said he would not comment on the Zurich verdict as he had not yet seen it.

Balint cautioned that the contents of the hidden archive may not live up to everyone’s expectations.

“It is very unlikely we are going to discover an unknown Kafka masterpiece in there, but these are things of value,” Balint said, noting the fierce competition over any original Kafka material. “There is something about the uncanny aura of Kafka that is attracted to all this.” /kga