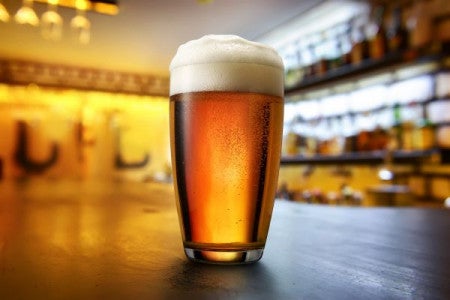 A Canadian couple harvesting Atlantic sea salt has teamed up with a brewmaster friend to create a new salt beer — which could become the first drink of its kind to be widely distributed.

Salty-sour gose beers had been brewed for about a thousand years in Germany before disappearing during World War II, but they have made a comeback with the rise in popularity of craft breweries across North America and beyond.

Each day, Colin Duggan wades into the cold, briny waters off Canada’s east coast with a bucket and returns to fill pots at his home in Dartmouth, Nova Scotia, where his wife Audrey boils down the water and filters out the salt.

The salt is then packaged for sale online and at specialty stores across Canada. Since starting up three years ago, the couple’s range has expanded to include flavors such as basil, coffee, lime and maple.

“I grew up around the ocean, that first taste of the salt evokes memories of the beach,” Duggan told AFP.

Recently, their friend, Stefan Gagliardi — who works at Alexandre Keith’s Brewery — had been on the lookout for a drink that would pair well with lobster, of which Nova Scotia is the world’s largest exporter.

“A traditional pairing is champagne, which can be expensive, and I wanted a more affordable alternative,” he said.

Gagliardi said he tried a German gose with a lobster dinner, liked it, and then thought to make his own with salt sourced from Duggan’s Tidal Salts company.

“The flavors that you get from that salt are very unique and they make the beer unique,” Gagliardi said.

“The gose has a lemon tartness, a dryness that is accentuated by the salinity. Its hop flavors are reminiscent of dill, with some wheat characteristics that taste like fresh dough, and coriander grown from Saskatchewan seeds to round out herbal flavors,” he said.

The first batch will be available only in Canada’s Atlantic coast provinces on May 1.

“If it’s a success we might grow its distribution to the rest of Canada and the United States,” Gagliardi said.

Alexandre Keith’s Brewery is among the continent’s oldest commercial breweries.

Duggan said they have stocked up plenty of salt ahead of the regional beer launch, but would need to massively ramp up production to meet continent-wide demand.

Already, they said the word has spread and they’re getting calls from across Canada and the U.S. CE/JB

Japan’s craft beer a treat for all the senses

‘Breaking Bad’ beer is to become a real thing