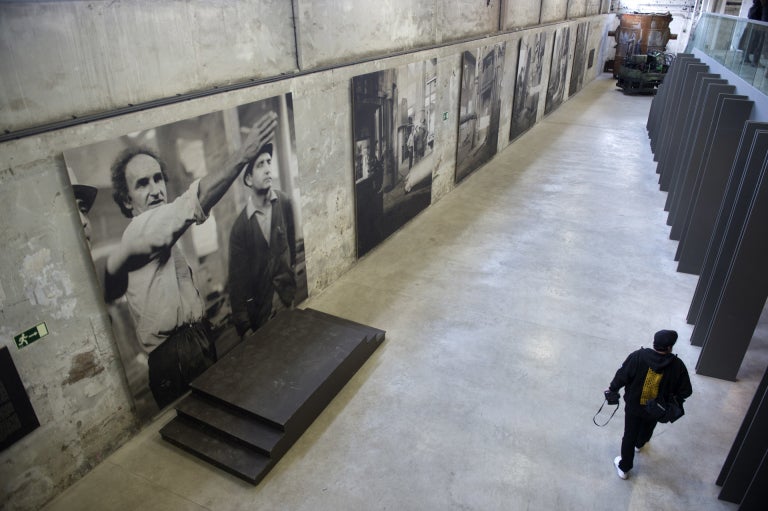 A man visits Chillida Lantoki, a former ironworks factory where Spanish artist Eduardo Chillida worked his iron pieces in the northern Spanish Basque city of Legazpi on April 9, 2019. - The Chillida-Leku private museum, designed by Spanish-Basque artist Eduardo Chillida (1924-2002) to display his sculptures open-air, will reopen on April 17, 2019 in the Spanish Basque Country, where the crisis forced to close it eight years ago. (Photo by ANDER GILLENEA / AFP) / RESTRICTED TO EDITORIAL USE - MANDATORY MENTION OF THE ARTIST UPON PUBLICATION - TO ILLUSTRATE THE EVENT AS SPECIFIED IN THE CAPTION

Chillida museum gets new lease of life in Spain

A museum devoted to Spanish sculptor Eduardo Chillida’s monumental works re-opens today, April 17, in the northern Basque Country in Spain, eight years after the financial crisis forced it to close its doors. Its New Swiss backers have also pledged to get his work a wider following around the world.

Around 40 of Chillida’s steel and stone sculptures are on show in the grounds of the museum in the town of Hernani, with others displayed at a traditional Basque 16th-century farm.

Regarded as one of the leading sculptors of his time, Chillida was known for his colossal abstract forms.

Before he died in 2002, aged 78, in his hometown of San Sebastian, he and his wife set up “Chillida Leku” (Basque for The Place of Chillida) in nearby Hernani. Today, it is a private museum owned by the family, director Mireia Massague told AFP.

To mark the re-opening, the museum is hosting a retrospective charting Chillida’s artistic journey from the 1940s to 2000. It brings together 90 of Chillida’s iron, granite, alabaster, plaster and paper works for the occasion.

Another exhibition will be devoted to “The Comb of the Wind” sculptures that have been braving the elements in San Sebastian’s Concha Bay since 1977.

Chillida inaugurated his museum in 2000 in the presence of hundreds of guests including then king Juan Carlos and German chancellor Gerhard Schroeder, but the museum’s struggles to make ends meet were exacerbated by the financial crisis, causing it to close in 2011. While Chillida enthusiasts were still able to visit, it was only on appointment.

The re-opening to the general public was made possible thanks to private funding from the powerful Swiss gallery Hauser & Wirth, which reached a deal with the family to manage the estate.

“The work of Chillida is admired in Europe and Japan and has huge potential to be even more admired in the United States and in the rest of Asia,” he said. “But compared to that of other big artists, we think it’s still [undervalued].”

Massague, meanwhile, said the Chillida Leku museum — coupled with Bilbao’s Guggenheim Museum and the Botin Centre in Santander — could contribute to making northern Spain an important draw for art-lovers. CE/JB