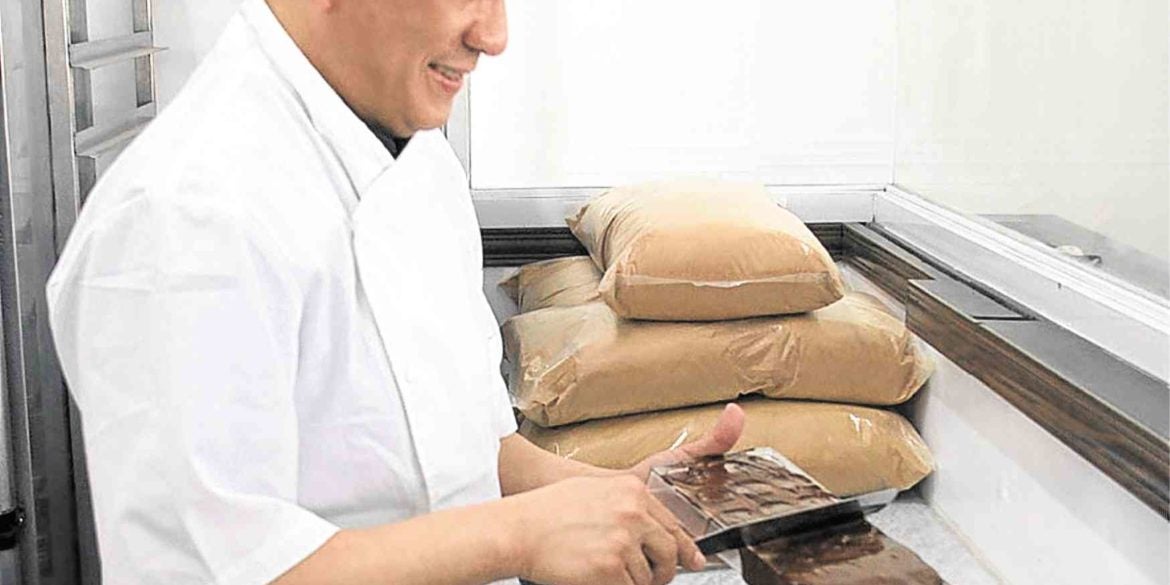 He had to contend with the fragility of the ingredients. “White chocolate is just the coating,” he said. “It shouldn’t mix with the ube filling, so great care has to be taken when adding the cocoa butter. Then again, you don’t want to overwhelm the palate with ube, otherwise, the chocolate will be forgotten.”

One major hurdle, Matias said, was achieving steady consistency from the yam. “Root crop and chocolate make a grainy mix,” he explained. “Chocolate is temperamental. I wanted the ube in its natural form, not the powdered version, so I had to find a supplier who was an expert at dehydrating techniques. If there’s any amount of moisture left in the ube, shelf life decreases proportionately—unless you add artificial flavoring, which tends to produce some acridity. The biggest challenge is getting the proportions of ingredients right.”

The brand name Manila Chocolatier got the nod from then Tourism Secretary Ramon Jimenez Jr. in 2014. The ube chocolate bar and its pili variant have since been bestsellers in duty-free stores.

He studied professional chocolate-making in not just one but three famous schools —Valrhona Chocolate School in France, Callebaut’s Chocolate Academy in Belgium, and Ecole Chocolat in Canada.

In 2009, when just a few local artisanal chocolates were in the market, his modest-sized company, Ralph & Matthew, launched pralines under the brand Machiavelli. Its selling point was the use of Asian flavors such as green tea and cashew.

Each praline is stamped with a matching cultural symbol. The bukayo (sweetened coconut) praline for instance, is imprinted with the sarimanok, an icon of Filipino Muslims whose diet is largely coconut-milk based.

At Gourdo’s, the tarty calamansi bar has been a big favorite, next to ube.

Manila Chocolatier’s time has surely come. There has been a resurgence of local artisan chocolates in the past few years, partly on account of the promotion of local products as affordable luxury. Local artisan chocolates are also perceived as healthier than more popular brands in the market (fewer preservatives despite the inevitable calories).

Matias is unfazed by the competition. “Anyone can claim to be a chocolatier nowadays, even those who merely learn from YouTube,” he says. “Praline-making separates the chocolatier from the chocolate maker who makes only bars.”—CONTRIBUTED