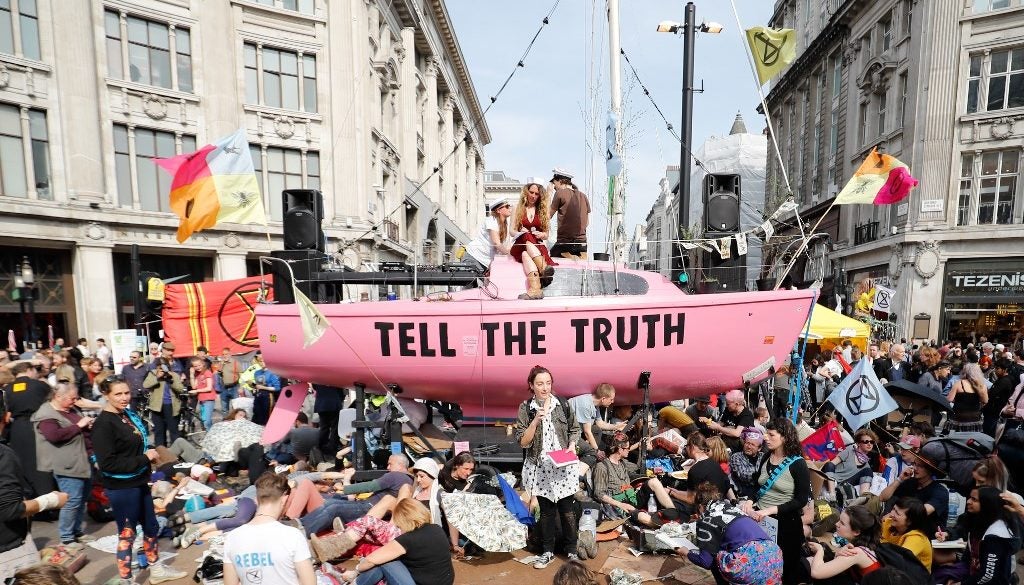 Climate change activists listen to speeches at their encampment blocking the road junction at Oxford Circus in the busy shopping district in central London on April 18, 2019 during the fourth day of an environmental protest by the Extinction Rebellion group. - London commuters faced further disruption on Thursday as climate change protests continued to bring parts of the British capital to a standstill, leading to over 300 arrests. Demonstrators began blocking off a bridge and major central road junctions on April 15 at the start of a civil disobedience campaign calling for governments to declare an ecological emergency over climate change, to reduce greenhouse gas emissions to zero by 2025, halt biodiversity loss and be led by new "citizens' assemblies on climate and ecological justice". (Photo by Tolga AKMEN / AFP)

Activists climb atop buses, glue themselves to buildings and block traffic as Extinction Rebellion expands its campaign of civil disobedience.

The climate change pressure group has become a household name in Britain this week amid protests that have brought key parts of the capital to a standstill and seen hundreds arrested.

The organisation, formed by academics in Britain last year alongside off-shoots in dozens of other countries, vows an unrelenting tide of protest until governments act more forcefully over climate change. It wants Britain to declare a climate and ecological emergency, reduce greenhouse gas emissions to zero by 2025, halt biodiversity loss and be led by “citizens’ assemblies on climate and ecological justice”.

Protesters aim to get arrested to draw maximum attention to the cause.

“I believe that breaking the law is necessary because it shows the population that something is wrong here,” Stuart Basden, one of the group’s organisers, told AFP.

“I want to demonstrate my view that the government as it stands is criminally negligent… by allowing the system to continue.”

The 36-year-old former web developer spent a week in jail in 2017 for his protest activities and is now training climate activists on how to “mentally prepare” for prison if it comes to that.

He said the movement now paralysing parts of central London had attracted people from far and wide in Britain, with hundreds quitting their jobs or university courses to join in.

“We didn’t have to convince people, we just gave them the information,” Basden said.

“They want to be involved. They realise how serious the situation is,” he told AFP.

Manda Brookman, 53, is one such Extinction Rebellion convert along with her 22-year-old daughter Ruby.

They were among those blocking Waterloo Bridge this week, helping to place trees in pots along its length in the shadow of Britain’s parliament.

“I am ready to be arrested for the great of our children,” she said.

They were joined by 68-year-old farmer Oliver Paines, who was earlier this month among a dozen activists to stage a naked protest in the House of Commons in one of Extinction Rebellion’s most eye-catching events to date.

Launched last autumn with a series of traffic-blocking protests in London, Extinction Rebellion has quickly become one of the world’s fastest-growing environmental movements.

It is now present in 49 countries, and attracted high-profile supporters from US intellectual Noam Chomsky and actress Emma Thompson to young Swedish climate activist Greta Thunberg.

On its British website, the group says it receives “small donations” from individuals and “larger sums” from organisations like the Berlin-based Guerilla Foundation, which donated 18,000 euros ($20,000) for its launch.

“We have to create a system that actually is accountable, that works for the interests of the people and that listens to them,” environmental lawyer Farhana Yamin told an Extinction Rebellion press conference in February.

A visiting professor at University College London and associate fellow at Chatham House, she has spent decades advising world leaders on climate change but has grown frustrated at global inaction.

On Tuesday, the London-based mother-of-four was among those arrested after gluing her hand to the ground outside oil giant Royal Dutch Shell’s headquarters.

Extinction Rebellion is now planning to target Heathrow Airport — Europe’s busiest flight hub — on Friday, and has said it wants to cause disruption in 80 cities in 33 countries before the end of the month.

But Basden is already thinking about the movement’s “next stages”.

“We will probably go away for the summer (to) organise and learn from what’s happened and come back in the autumn with something bigger and hopefully more global,” he said.