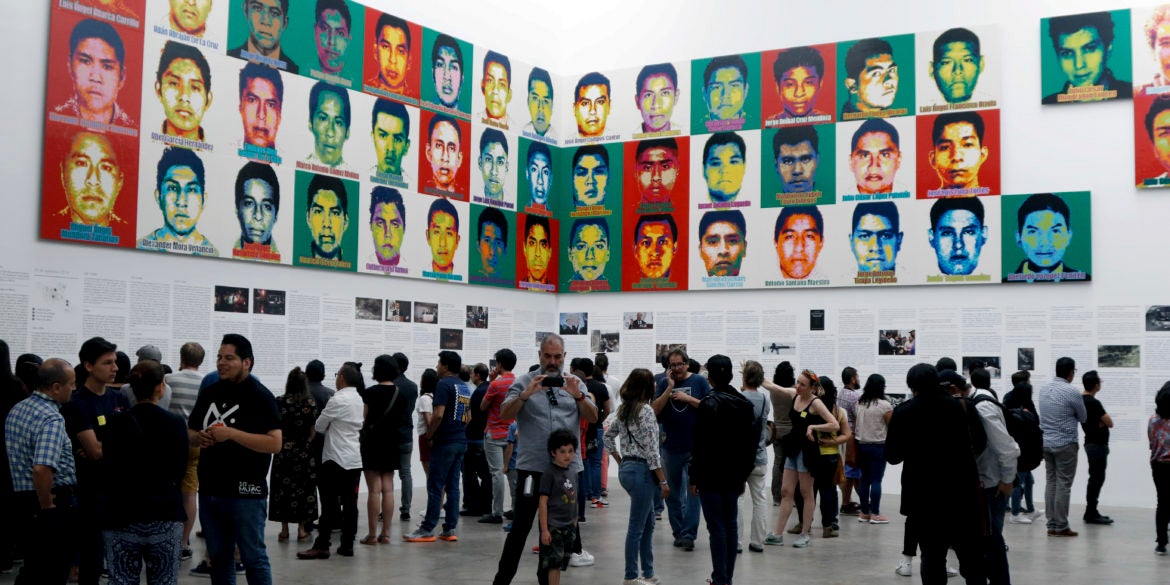 People stand under the portraits of 43 college students who went missing in 2014 in an apparent massacre, by Chinese concept artist and government critic Ai Weiwei at the Contemporary Art University Museum (MUAC) in Mexico City, Mexico, Saturday, April 13, 2019. Each portrait in the work of art titled "Reestablish Memories" is made out of lego blocks. Image: AP/Claudio Cruz

Chinese artist Ai Weiwei’s interest in studying human rights around the world led to his meeting with relatives of the 43 college students who disappeared in southern Mexico in 2014. That encounter led, in turn, to his new exhibit in Mexico’s capital.

Ai has lived under house arrest in China and faced censorship because of his activism, even as his fame led to major exhibits in leading international museums, including the Tate Gallery in London and the Museum of Modern Art in New York.

In Mexico, Ai chose a university museum to mount his exhibit dedicated to the case of the students from the teachers’ college at Ayotzinapa in Guerrero state. He used students to assemble Legos into big, colorful portraits of the 43 missing young people.

“He wanted it to be a university structure,” said Cuauhtémoc Medina, one of the curators of “Ai Weiwei: Re-establish memories”, the show at the contemporary art museum of the National Autonomous University of Mexico.

The idea began in 2016 when Medina took Ai to the Miguel Agustin Pro Human Rights Center, where the artist talked with some of the students’ relatives.

“At some point he told them that he had also been a political prisoner, that when one is disappeared in a completely isolated situation, the only thing that keeps you alive is being totally convinced that your loved ones must be fighting by any means possible to get you back,” Medina said.

Ai was confined to his home in China as a result of his outspoken criticisms following the 2008 earthquake in Sichuan province that killed some 90,000 people, including thousands of children in poorly constructed schools.

The 43 Mexican students disappeared Sept. 14, 2014, in the Guerrero city of Iguala after local police allegedly turned them over to a local drug gang. The federal government maintained the gang killed the students and burned their bodies at a garbage dump. But international experts raised doubts about that scenario and Mexico’s new administration has created a commission to re-investigate.

“This is an example of the very interesting conversation that exists today between the aesthetic and the political,” Medina said. “The human rights crisis in Mexico has become a global topic in a radical way, so that we can’t pretend anymore that the disappearance of dozens or thousands of people or the deaths of more than 200,000 in recent years are secondary.”

Ai, who also makes documentaries, received permission from the Ayotzinapa families to do a film on the case. Some of the interviews that are part of the film are being shown at the exhibit, which will be on display until Oct. 6.

But the students’ portraits are the most powerful element.

“It was really interesting, because it’s re-signifying the material completely,” said Iván Leyva, a history student at the university who helped assemble the portraits. “Who hasn’t played with Legos as a child?”

The portraits are based on images that the parents of the missing youths carry on signs during their protest marches and at news conferences — young faces looking straight ahead with their names below.

Each pixel is represented by a Lego brick and the students followed a color guide to assemble them. It creates a three-dimensional and multi-colored effect for the faces on backgrounds of green, white or red, the colors of Mexico’s national flag.

The young people who assembled the works found themselves moved as the portraits began to take shape.

“It gave me goosebumps because I thought: ‘That could have been me.’ No one is exempt,” Lleyva said. “It doesn’t stop making you angry and it likely has to do with the symbolism of the event, the symbolism of this attack against the student community.” CC