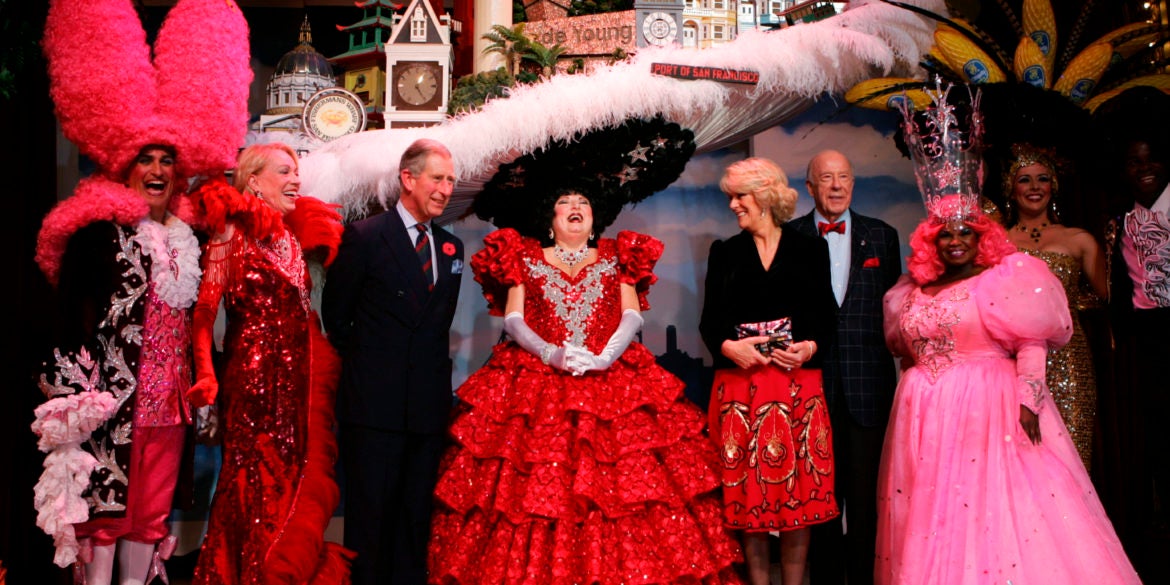 In this Nov. 6, 2005, file photo, Prince Charles, third from left, and his wife, Camilla, Duchess of Cornwall, fifth from left, meet Val Diamond, center, wearing a San Francisco Skyline Hat and other cast members after they attended the musical performance of Beach Blanket Babylon in San Francisco. Next to the Duchess of Cornwall is former U.S. Secretary of State George Shultz, and beside Prince Charles is Charlotte Maillard Shultz. The campy "Beach Blanket Babylon" musical revue show that has been a must-see for San Francisco tourists for 45 years is coming to an end. Producer Jo Schuman Silver announced Wednesday, April 17, 2019, the show's final performances will be on New Year's Eve. Image: Pool via AP/Paul Sakuma

The campy “Beach Blanket Babylon” musical revue that has been a must-see for San Francisco tourists for 45 years is coming to an end.

The show spoofs political and pop culture and has characters in colorful costumes with massive hats, including one with San Francisco’s skyline.

The show follows Snow White around the world as she searches for her Prince Charming. Along the way she encounters a line-up of political and pop culture characters. Recent highlights include Donald and Melania Trump, Nancy Pelosi, Vladimir Putin, Beyoncé, Ariana Grande and Oprah Winfrey.

Silver said the show is ending because he felt it was the right time and not for financial reasons. “There was no reason — I just started thinking, ‘Wow, how much longer do we go?'” she told the San Francisco Chronicle.

When the show started in 1974, it was scheduled to run for only six weeks. But then it became an international phenomenon and “the quintessential San Francisco experience,” she said

There have been more than 17,000 performances that have been seen by 6.5 million people, including Queen Elizabeth II, Prince Charles, David Bowie, Liza Minnelli and Robin Williams. CC