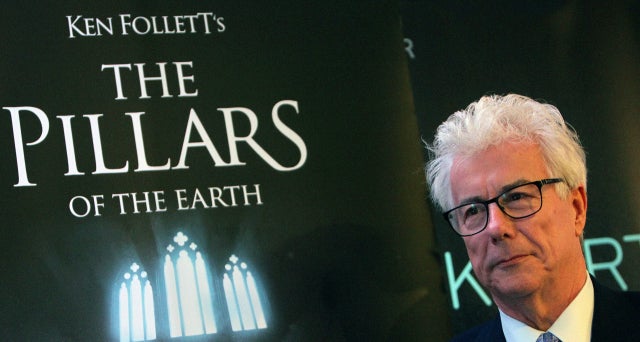 British author Ken Follett poses next to an advertisement for his book "The Pillars of the Earth" during a conference at the Book Fair in Frankfurt am Main, western Germany, October 15, 2015. Image: AFP/ Daniel Roland

The author of what may be the world’s most popular book about a cathedral told AFP that watching Notre-Dame being eaten up by flames made him feel like someone was dying.

Its story about the construction of a 12th-century cathedral in a fictional English town traces the same era as that in which Notre-Dame assumed its majestic place in the heart of Paris.

“It symbolises our connection with history,” Follett told AFP as the world mourned Monday’s devastation.

“Notre-Dame was started in 1163, nearly a 1,000 years ago. It connects us with our past, and we see something like that being destroyed, and we feel as if somebody died.”

The 69-year-old Welshman studied Notre-Dame’s history and architectural construction as he prepared to write his own work.

One of the scenes in “The Pillars of Earth” is set in a Parisian cathedral that readers may very well assume is Notre-Dame.

Follett said he watched the flames shoot out of the Gothic building on television and “was horrified, like most of the world was horrified.”

“I had a pretty good idea of what was happening. The only place where a fire can start in a cathedral is in the roof space,” he said.

“There is a triangular space in the roof which is made of wood — almost everything else is made of stone.”

This knowledge did little to lift his sense of dread.

“I thought in the morning, there would be nothing left,” he said.

Follett said the ancient structure’s ability to withstand such an inferno was a testament to the builders and engineers of the time.

“The medieval builders built better than we thought because, miraculously, much of the cathedral has survived,” he said.

Follett expressed no doubt that the French — and global — cultural icon would stand proud atop its perch on the River Seine.

“I am optimistic about it. The money will be found, the craftsmen will be found,” said Follett. “My sense of it is French people are determined about this sort of thing. They have decided to do it and will make this happen.” CC