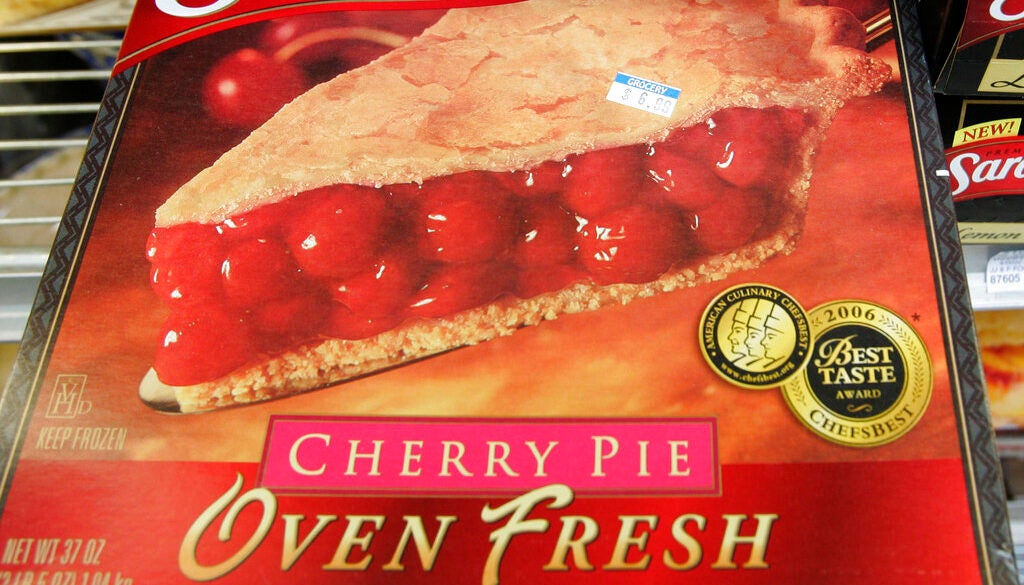 FILE - This Monday, Feb. 2, 2009 file photo shows a frozen cherry pie in a store's freezer in Palo Alto, Calif. In 2019, the Food and Drug Administration is preparing to propose getting rid of a federal standard for frozen cherry pie, which say the products must be at least 25% cherries by weight. (AP Photo/Paul Sakuma)

How many cherries in frozen pie? FDA may soon drop rules

NEW YORK — President Donald Trump may soon be able to claim a sweet victory for his deregulation push, with officials preparing to get rid of the decades-old rules for frozen cherry pies.

Emails show the Food and Drug Administration planned to start the process for revoking the standard for frozen cherry pies this week, followed by a similar revocation of the standard for French dressing. Plans to get rid of the obscure rules had been tucked into the Trump administration’s deregulation agenda .

Standards for an array of foods including cottage cheese and canned peas were put in place decades ago partly to ensure a level of quality. They spell out how products with specific names can be made, including ingredients that are required or not allowed. The rules for frozen cherry pies say they must be 25% cherries by weight with no more than 15% of the cherries being blemished.

It’s not always clear why some food terms have standards and others don’t. The rules are seen as arcane by many and are a sore spot in the food industry, with companies saying they prevent innovation or prompt lawsuits. The FDA under Trump has said it plans to update the standards.

Lee Sanders of the American Bakers Association said she’s hopeful the cherry pie standard will finally be revoked, but that it would not make a big difference for the industry.

“I feel confident our members are producing cherry pies with more than enough cherries,” she said.

The FDA also plans to take another look at milk, which federal regulations define as coming from a cow. The dairy industry has called for a crackdown on soy, rice and almond drinks makers that use the term.

The frozen cherry pie standard is an outlier because other fruit pies don’t have similar rules. The same is true for French dressing: The Association for Dressings and Sauces, which once went after a vegan spread for violating the mayonnaise standard, notes other dressings are not subject to such standards.

Former FDA Commissioner Scott Gottlieb, who stepped down this month, said in an October tweet that it was among the FDA’s priorities to “de-regulate frozen cherry pie.” He apparently wasn’t entirely joking.

In a statement this week, the FDA said the dates were for “long range internal planning purposes” and that the timing could shift. Updates to the standards will be publicly noted, the agency said.