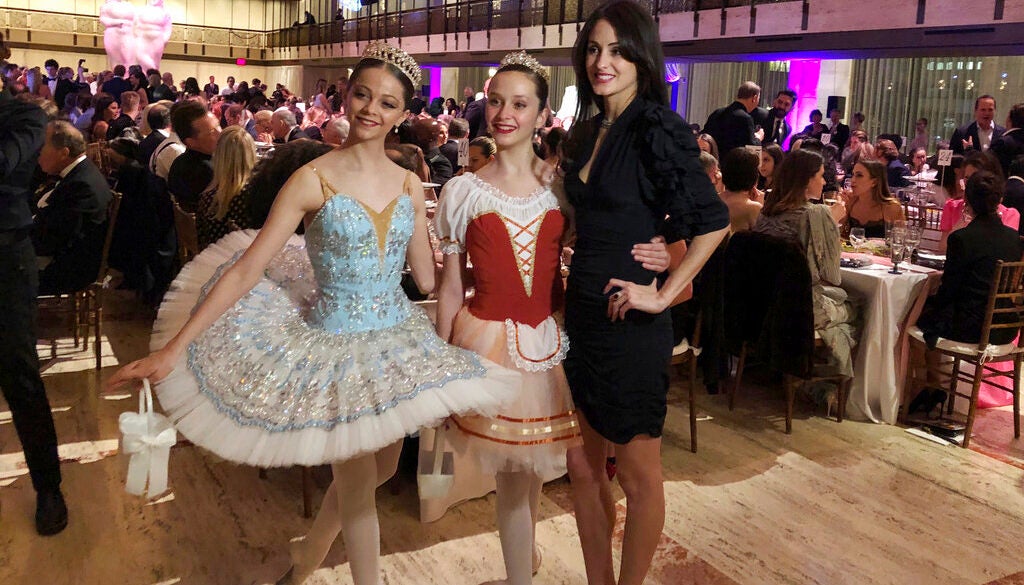 Choreographer Melanie Hamrick poses with dancers at the gala of Youth America Grand Prix, the world’s largest ballet scholarship competition, on Thursday, April 18, after the U.S. premiere of her new ballet, “Porte Rouge” (Red Door), based on classic Rolling Stones tunes arranged by her partner, Mick Jagger. The Stones frontman, recovering from medical treatment, watched from backstage and addressed the audience briefly via microphone before the show. (AP Photo/Jocelyn Noveck)

NEW YORK — Talk about your “Moves Like Jagger.” The recovering rocker made a stealth appearance at the ballet, slipping backstage to support his partner, Melanie Hamrick, as she presented her new dance based on Rolling Stones songs.

It was Hamrick’s first work as choreographer, with a score arranged by Jagger of three Stones classics: “Sympathy for the Devil,” ”She’s a Rainbow,” and “Paint it Black.” Hamrick created the short ballet for the 20th anniversary of Youth America Grand Prix, the world’s largest ballet scholarship competition, in which she performed as a teenager.

Jagger didn’t appear onstage or in the audience. But he did greet the crowd at New York’s Lincoln Center on Thursday night via a backstage mic.

“Hi everybody, this is Mick Jagger here,” he said, congratulating YAGP on its anniversary and adding: “I hope you are going to enjoy this wonderful ballet — and the music of course.”

Hamrick said later in an interview that Jagger was “doing great. Thank goodness!”

“It was cute,” she said of his visit backstage. “He wanted to watch the piece. It was really special that he was there and able to see it. It feels good (for the dancers) when the choreographer and the person who wrote the music are watching you. It gave everyone an extra special feeling.”

Hamrick, who dances with American Ballet Theater but did not perform herself in the piece, said it had been nerve-wracking presenting her first choreographic effort.

It was Jagger, she said, who encouraged her to take the plunge when the idea came up, from YAGP founder Larissa Saveliev, for Hamrick to do something with Stones music.

“Mick was, ‘Who better than you? You’re a professional ballerina, you come to my concerts,'” she said. “It went from there.”

Hamrick, 31, noted that the scholarship program was responsible for launching her career; though she didn’t win, her performance there led to a contract to perform at ABT’s Studio Company in 2003. She joined the main company in 2004.

It was Hamrick who chose the songs for the ballet, called “Porte Rouge,” or “Red Door” (as in, “I see a red door….”). Jagger arranged the songs to fit.

“We worked together and he said, ‘Just trust your gut … go with what your instincts are, and I’ll help you figure out how to make the cuts.'”

“I picked the songs I felt I connected with the most,” she said, “and I was like, ‘Can you make these work?’ And he took it away. He was very good, he was, ‘You do YOU.'”

The dancers included six from ABT and one from New York City Ballet. But the obvious Jagger “character” appeared to be the Argentine ABT star Herman Cornejo, with even his flowing mop of hair resembling the Stones frontman.
“I feel like they have the same energy,” Hamrick noted.

“I think it was just such a beautiful relationship that needed to be merged,” said Royal, a soloist with ABT. “It’s so athletic and dynamic, and it was just fun to perform.”

Royal, 30, admitted he hadn’t had much previous experience with Stones music.

“To be honest with you, I hadn’t heard a lot of Rolling Stones music until Melanie approached me about this project, and I went on Spotify and just started listening to a lot of their music,” he said.

He did, though, get to meet Jagger. “It was great to have him on board to support us,” Royal said.

Hamrick noted she’d had to strike a fine line with channeling the essence of the Stones, without imitating those moves like Jagger.

Is there a future for the piece? Hamrick said she’s planning for it to reappear as a longer piece, with more Stones songs. “Hopefully everyone will like it,” she said with a smile. MKH

Adults can learn ballet—even for cross-training