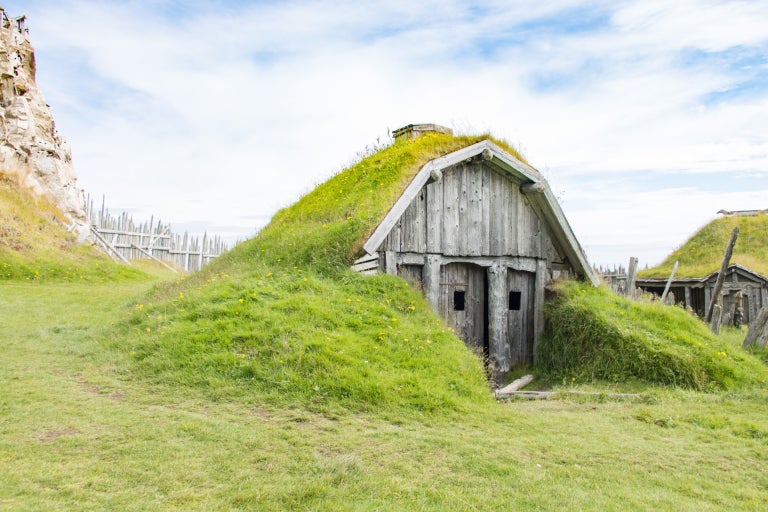 These abandoned medieval turf houses are common in the Icelandic landscape. In the past they offered good insulation compared to buildings made of wood or stone.

In the Thjorsardalur valley in Iceland’s southern highlands, the first green shoots are starting to sprout up from the browned grass, until recently covered by a thick blanket of snow. Soon, a carpet of lush green turf will cover the ground and envelop the sides and roof of the large farmstead and its stone-encircled chapel, located in the middle of a vast field not far from the Hekla volcano.

Iceland’s turf buildings, which blend in perfectly with their natural surroundings, are pristine examples of a local architectural tradition introduced by the first Nordic settlers in the ninth century. Because of the lack of trees in Iceland, turf was a popular building material and thick turf walls were useful to ward off the cold.

“We [do not] have an extreme amount of trees, so for one thing [turf] is easy [to] access. It was cheap and it works well,” explained Olivera Ilic, a Viking history buff who heads a project to maintain the site.

Cut from nearby marshlands, the turf was sliced into slabs and used to create thick outer walls on a structure typically made of timber — either driftwood or obtained through trade. Stone foundations were also common.

Their style “varies as much as the number of turf houses made — no two are the same,” said Eyjolfur Eyjolfsson, who lives in the Austur-Medalholt plains near Selfoss, in southern Iceland. Here, four homes clustered together are snugly wrapped in a thick layer of grass.

A 19th-century farmstead which now serves as a museum bears a sign across the door reading: “Where Nature is Part of the House.”

“The turf house represents an architecture that is in very good or complete harmony with its surroundings,” said Eyjolfsson, who is also a 39-year-old musician and folklorist. “Turf is a very easy-to-use material to build constructions, but at the same time it is not a very good material.”

With Iceland’s inclement weather, turf homes needed to be rebuilt about every 20 years, though some could last for up to 70 years. In 1910, there were around 5,500 turf homes of these rustic and basic farmsteads in Iceland, accounting for more than half of all residences, according to historians.

Today, only a small fraction of the 249 homes registered in 1960 still exist, uninhabited and preserved as cultural heritage sites and museums.

The building tradition is still practiced in Iceland, although only by a few craftsmen trained in the techniques used by older generations, however, maintaining the homes is a tedious business.

“We try to keep it as authentic as possible. We want to do it the old way, which is time-consuming,” said Ilic.

Since 2011, Iceland has placed 14 turf homes on the tentative list of United Nations Educational, Scientific and Cultural Organization (UNESCO) World Heritage sites, meaning they could be eligible for nomination in the future. CE/JB