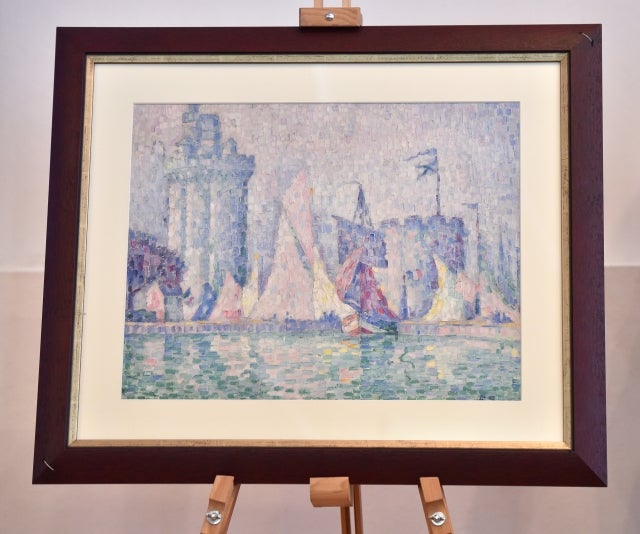 A photo shows the painting "Port de la Rochelle" (1915) by French artist Paul Signac (1863-1935) during its presentation at the ministry of Internal Affairs of Ukraine in Kiev on April 23, 2019. Image: Sergei SUPINSKY / AFP

Ukrainian authorities said Tuesday they had found an oil painting by the French Impressionist Paul Signac, valued at 1.5 million euros ($1.68 million or P87.7 million), which was stolen last year from a museum in France.

Police chief Sergiy Knyazev said the painting was discovered at the home of a Kiev man who was also wanted on suspicion of murdering a jeweler.

He added that the suspects in the theft, all Ukrainian, had been arrested.

The painting would shortly be returned to the Museum of Fine Arts in Nancy in northeast France, Ukraine’s interior minister Arsen Avakov said as he presented the work at an event with French ambassador Isabelle Dumont.

The 1915 oil painting, which was cut from its frame during the theft, depicts boats at the entrance to the French port of La Rochelle.

“We received information about a group of people looking for buyers for paintings stolen in Europe last year,” said another police official, Sergiy Tykhonov.

“Several works of art have been discovered, including this painting, as part of a series of searches,” he added.

Ukrainian officials are working with their Austrian counterparts to verify the possible involvement of this suspected criminal group in the theft in Vienna of a painting by another French Impressionist, Auguste Renoir, Tykhonov said. NVG