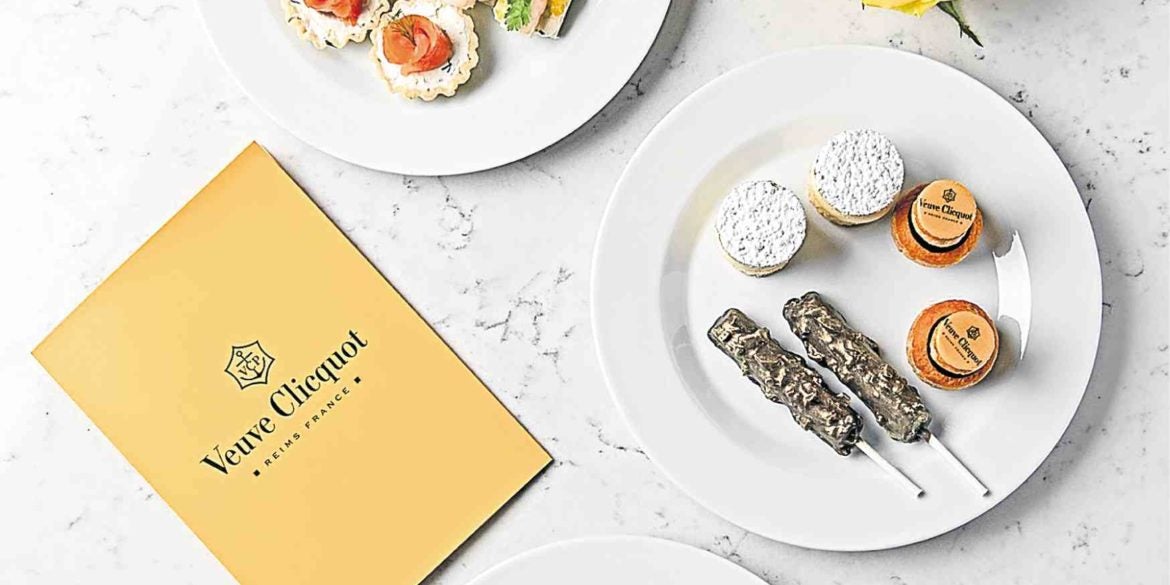 Afternoon tea gets a fizzy boost

When Alice Walker, author of “The Color Purple,” said, “Tea to the English is really a picnic indoors,” she was referring to the very British custom of taking a mid-afternoon break and indulging in a spot of tea. Tea drinking in England can be traced back to the 17th century, but was refined and popularized by Queen Victoria in the 19th century.

Some Filipinos might compare it to our merienda of kakanin (rice cakes) and banana cue, but British high tea is more elaborate and consists of savory bites and sweet treats to go with a pot of piping-hot tea.

For the past several years, Writers Bar at Raffles Makati has been holding theme afternoon tea promotions—first in partnership with SSI (Stores Specialists Inc.), and later with Wedgwood, the British fine china and porcelain company founded in 1759.

This time, the hotel partnered with Veuve Clicquot for its Champagne Afternoon Tea, available until June 30, where customers can enjoy a glass of bubbly to go with the three-tiered set.

Guests can not only sip some bubbly, as the macarons and gold leaf-topped lollipops (two of each) are also infused with champagne. Other sweets include passion fruit religieuse, dark chocolate cake, pistachio and mango tartlet, classic Victoria cake, and freshly baked scones with tubs of clotted cream, lemon curd or strawberry preserves.

“When we partnered with SSI, our afternoon tea series featured brands like Kate Spade, Furla, Charriol and Tiffany,” Monique Toda, the hotel’s director of communications, told Lifestyle. Tiny cakes that came with the tea were shaped like miniature purses, and edible “boxes” were tinted the signature Tiffany blue.

This Pret-a-Portea series (a play on the French term pret-a-porter or ready-to-wear) was followed by the Royal Afternoon tea series in which the hotel partnered with Wedgwood, and all the plates and cups used were from the British brand.

“I was inspired by the Netflix series ‘The Crown,’ so we came up with royalty-inspired promotions featuring Marie Antoinette, Queen Victoria and Imperial Russia,” Toda said.

She and her team came up with trivia, pocket events and talks, including one on the ways—Cornish, Devon—to spread clotted cream on one’s scones.

“During our Imperial Russia series, we brought in a tea connoisseur who talked about how tea traveled from China to Russia. Another time, we had a pop-up store of British items. It’s really a whole experience,” Toda said.