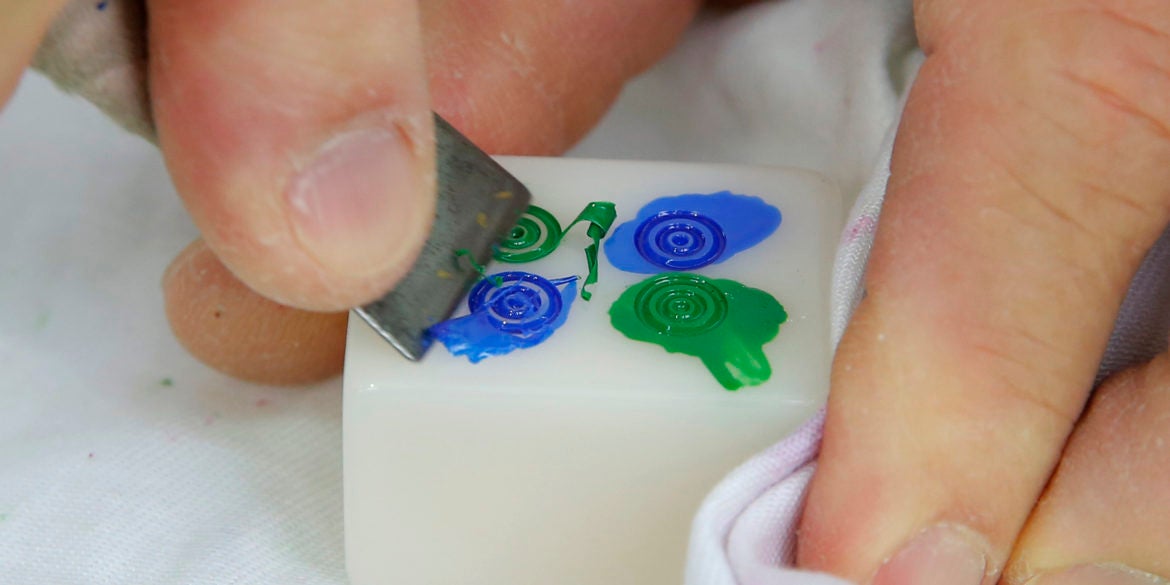 Hand-carved mahjong tiles are a dying craft in Hong Kong

HONG KONG — Just opposite the entrance to a neon-lit night market, one of Hong Kong’s few remaining carvers of mahjong tiles engraves the two Chinese characters for the number 8,000 on a piece of acrylic.

With a knife in his right hand, Cheung Shun-king turns the tile with the other to cut into it. From time to time, he gently blows away the shavings.

His is a dying craft in an era of mass-produced tiles for the table-top game, popular in southern China, Hong Kong, and Taiwan. The 65-year-old artisan believes there are only three or four carvers left in Hong Kong. Cheung is trying to revive interest in the tradition by holding workshops to demonstrate how the tiles are made.

“For hand-carved mahjong tiles, when you look closely, you can see each of them is different,” he said inside his shop, a 100-square-foot (9-square-meter) space on the ground-floor of an old-style shop-house. “It is because I carve them one after another, complete them one by one instead of using a mold. Sometimes, the strength I apply may be different if I just have had a meal or chat while carving.”

Played at Lunar New Year and other gatherings, mahjong has become a symbol of friendship and family bonds. Chinese restaurants provide tables and mahjong sets to customers who host wedding or birthday banquets. Hong Kong once was dotted with mahjong parlors, where people could play against strangers for money, but few are left.

Each mahjong set has 144 tiles with designs that include Chinese characters, dots, flowers and bamboo sticks. The four players sit around a square table and shuffle the tiles face-down. Each arranges a set of tiles, like a hand of cards, before the game starts. They then take turns drawing and discarding the tiles until one player forms a winning combination.

It takes Cheung nearly a week to make one set, because he usually carves only at night, when he isn’t serving customers and running errands. After carving the tiles, he cleans and paints them in three colors:  green, blue, and red. The final step is to rub and wipe away the excess dried paint.

A set of his tiles sells for at least $400, nearly tenfold the price of factory-made tiles.

He started a recent workshop by demonstrating how he engraves the tiles, so the participants can learn basic skills such as the proper posture to sit and hold a carving knife. Then, he went around the room teaching them one-on-one.

“Once you tried, you know, hacking your way with one of these, then you can see the intense skill it takes just to make a few strokes and to get something so beautiful out of it,” said one student, Adrian O’Sullivan, a 28-year-old elementary school teacher.

Cheung doesn’t expect them to become master carvers. At the end of the class, he retouches the tiles made by the students so they have a good-looking one to take home.

“There used to be more than 10 mahjong stores along this street,” he said. “Before when it was a flourishing business, it wasn’t a problem even if there were many of us. Now there are only one to two stores in this area and business is poor. It’s because the younger generations don’t play mahjong that often anymore. Even if they play it, they play on their phones alone.” /kga