400-year-old Bible stolen from US is found | Inquirer Lifestyle 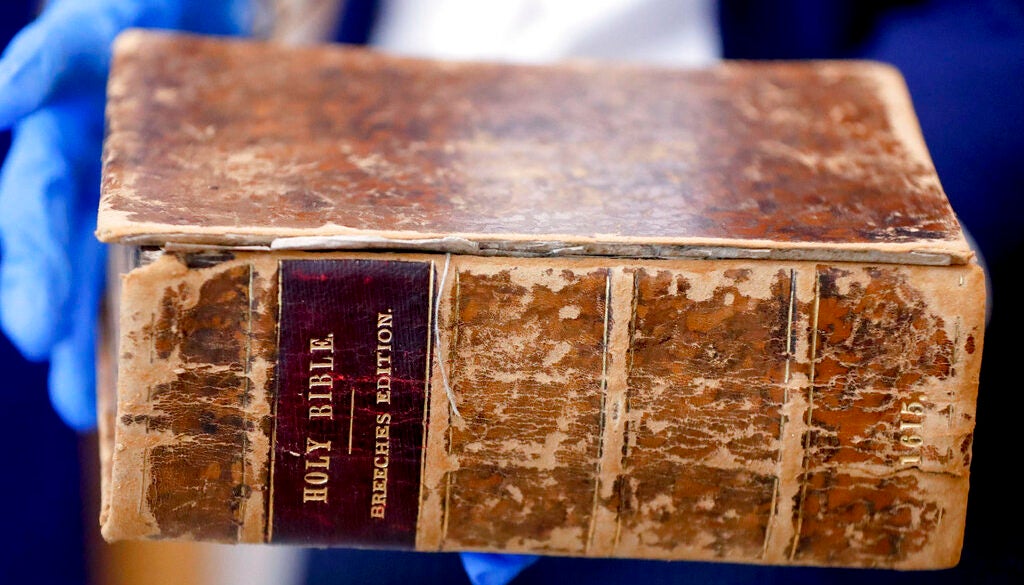 400-year-old Bible stolen from US is found in Netherlands

PITTSBURGH — A 17th-century Geneva Bible, one of the hundreds of rare books authorities said was stolen from a Pittsburgh library as part of a 20-year-long theft scheme, is back home.

The Bible, published in 1615, was traced to the American Pilgrim Museum in Leiden, about 45 miles (70 kilometers) from Amsterdam in the Netherlands, said FBI agent Robert Jones.

It was among more than 300 rare books, maps, plate books, atlases and more that were discovered missing from the Carnegie Library of Pittsburgh last year. A former archivist at the library and a rare book dealer are accused of stealing books valued at more than $8 million (P416.7 million).

The Bible “is more than a piece of evidence,” Jones said Thursday at a news conference in Pittsburgh. “I am happy to say it has finally made its way back to its rightful owner here in Pittsburgh.”

There are several similar Bibles, Jones said afterward. “From a dollar-figure sense, it is not priceless,” he said. “From a history perspective, it is priceless.”

The first edition of the Geneva Bible was published in 1560. This particular edition, published in London four years after the first King James version, is similar to a Bible known to have been brought over by the Pilgrims in 1620, Jones said.

The FBI will hand over the Bible to Allegheny County prosecutors, who will return it to the library, Zappala Jr. said.

After charges were filed last year, Zappala said, the director of the Dutch museum contacted police in The Hague and the Carnegie Library, which in turn contacted the FBI in Pittsburgh.

The FBI in The Hague worked with the museum and then shipped the Bible to FBI offices in Pittsburgh, said FBI agent Shawn Brokos.

The FBI hopes news of the recovery of this Bible will prompt others to look at their collections for any possible items stolen from the Pittsburgh library. “Some probably are in private collections,” Jones said.

Prosecutors in Pittsburgh have so far recovered 18 of the books stolen from the library, Zappala said. They have been found in the U.S. and abroad.

One copy of Isaac Newton’s “Philosophiae Naturalis Principia Mathematica,” a watershed of science valued at $900,000, and John Adams’ “A Defense of the Constitutions of Government of the United States of America,” valued at $20,000, are among the items prosecutors have recovered, Zappala’s spokesman said.

One of the books not yet recovered is “An Inquiry into the Nature and Causes of the Wealth of Nations” the magnum opus by philosopher Adam Smith, valued at $180,000.