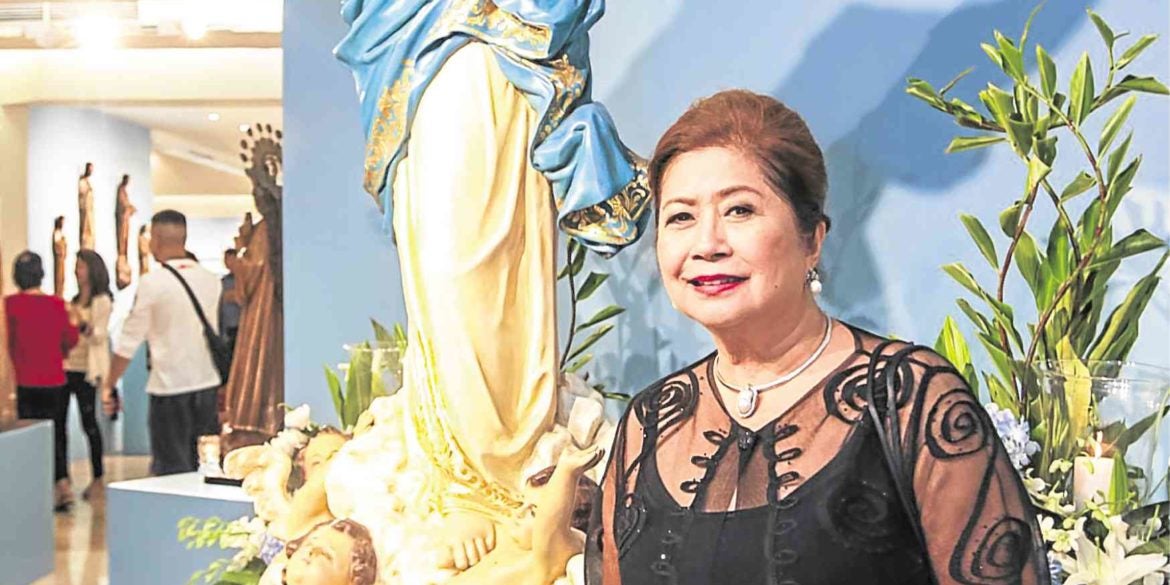 Renee Vicente Francisco with the Our Lady of the Assumption, an original work by her grandfather

It had to be moved to a later date, but not even a tremor could stop the opening of the sale-exhibit of a collection of religious icons by sculptor and primero santero Maximo Vicente Sr.

At 5 p.m. on April 22, friends and Assumption classmates of Rustan’s chair and CEO Zenaida “Nedy” Tantoco and Regina Vicente Francisco gathered on the fifth floor of Rustan’s Makati, for the opening of the sale-exhibit of the 90-plus collection, the last remaining samples from the Vicente taller, the oldest workshop for religious iconography in the Philippines. It was established in Quiapo in 1908.

Francisco, Vicente’s eldest grandchild and custodian of the collection left by her parents, Maximo Jr. and Soledad Vicente, was joined by her sister, children and grandchildren.

Shortly before the program started, the ground shook. And while other guests scurried to find cover, the senior guests remained calm. Marcos was heard to have said she felt safer where she was than if she were in her high-rise condo.

Concerned for everyone’s safety, Tantoco carried on with the program swiftly. (The department store was evacuated and closed as precautionary measure soon after.)

Marilen Tantoco, Rustan’s vice president for home merchandising, told Inquirer Lifestyle most of the icons were already sold, save for the life-size Our Lady of the Assumption, the last original work of Vicente, who died in 1964, and a few smaller pieces. All the samples are over 50 years old.

Vicente’s works can be found in the homes of wealthy collectors as well as big churches all over the country. After his death, his son Maximo Jr. and his wife Soledad ran the taller with carvers trained in Vicente’s style, which reputedly was on par with santeros in Europe.

The sale-exhibit is until May 6. —CVM