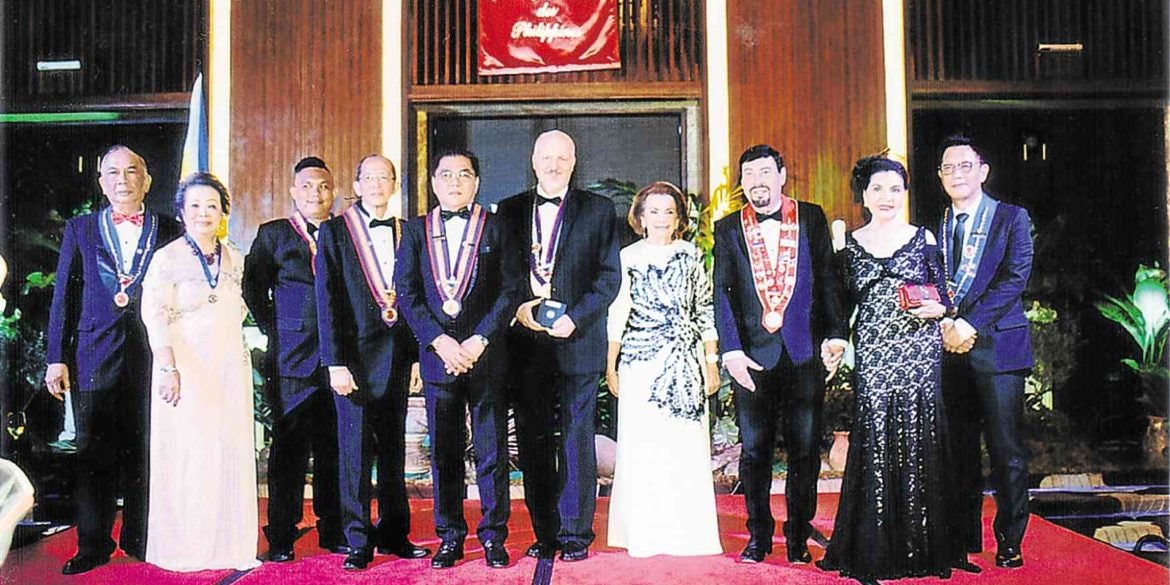 When Brian Connelly, general manager of the Marco Polo Plaza Cebu, suggested Las Vegas as a theme for the induction gala of the Cebu chapter of La Chaine des Rotisseurs, the reaction was, “Will you install a gambling casino in the ballroom?”

“No,” he assured everyone. “I want to stress the importance of Las Vegas as a hub of international entertainment. I’d like to recapture the glamour and glitz of its past as well as the brilliance of its present.”

Immediate approval came from Michel and Amparito Lhuillier. He is the Baili Delegue of La Chaine for the Philippines, and she is the Baili for Cebu. They looked the picture of modern-day allure that evening. Amparito was in black lace and sparkling with jewels.

Michel, sleek in black tux and red band studded with countless pins indicating where he has been for La Chaine events here and abroad, poised himself on a dais with a golden sword for the ceremonies. Nineteen new members were inducted into La Chaine in Cebu that night.

Special awards and promotions were presented to deserving members that evening. Efren Belarmino of Plantation Bay got the coveted silver medal. Jurgen Pesch got the bronze medal, while Edgardo Tongco, general manager of Harolds’ Hotel, was raised to the rank of commandeur.

His son Joward Tongco takes after him. He is at the Cebu Marco Polo as restaurants, bars and events manager. Joward practically engineered the dinner with clockwork efficiency, every plate served at the right time, and seemingly effortlessly. That requires a lot of, well, effort.

Dinner was a superb epicurean experience. There was foie gras, magret of duck, Patagonian toothfish and beef Wellington so tender you could cut it with a fork. For dessert, everyone had an individual baked Alaska!

There was sustained applause for executive chef Juanito Abangan. More is his merit as he is a local boy who rose from the ranks. And he is so humble.

Teresin Mendezona, Cebu’s supreme authority for all that is exquisite, is all praise for Juanito. So are the rest of the members of the board in Cebu’s La Chaine: Dr. Nestor Alonso, Dr. Vivina Chiu Yrastorza and Winglip Chang. Add to them Hans Eulenhoefer, who that evening was appointed by Michel as the new president of L’Ordre Mondial des Gourmets et Degustateurs in Cebu.

Michel Lhuillier overwhelmingly congratulated all who had been involved in the success of the evening, most specially Brian Connelly, who has said the Marco Polo in Cebu is open to any event of La Chaine.

A week later, Michel and Amparito flew to Manila for the induction gala of La Chaine there, presided by Federico Borromeo, Baili de Manille. It was held at the Grand Hyatt in Fort Bonifacio.

“Hans Hauri made it a splendid and unforgettable evening,” Michel and Amparito said when they returned to Cebu two days later.

What’s next? La Chaine members have been notified by Elmera Abellanosa, in charge of the Cebu secretariat, to circle May 18 in red. That’s the day the Cebu chapter of La Chaine des Rotisseurs will have a Safari Encounter.

That will be at Michel Lhuillier’s Cebu Safari and Adventure Park, spread out over a realm of mountains that has become a habitat for an impressive zoological collection of wild animals. Site is the municipality of Carmen in northern Cebu.

Members and guests may take the coasters and leave their cars parked at the Marco Polo. After touring to see the animals in the afternoon, there will be cocktails at 5 p.m., followed by dinner catered by the Marco Polo Cebu. They are taking the hotel’s kitchen brigade there, and special equipment will be designed for the grilling.

Joward Tongco adds that the service will be impeccable. Carts and trolleys with food will go around the tables with some of the specialties from the sumptuous buffet spread.

How about the anniversary gala in December? As Brian Connelly has said, “We’re open to anything.” And we know he delivers.