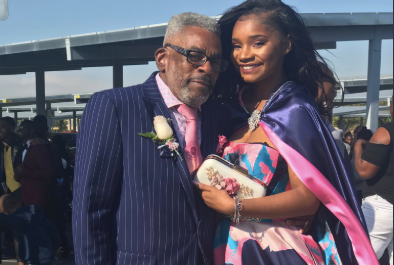 A 67-year-old grandfather saved the day for his granddaughter who did not have a date to prom, as he looked dapper in a series of prom photos with her — which went viral overnight.

Kaylah Bell, a 17-year-old teen from California, United States, flaunted her well-dressed grandfather in a Twitter post last April 21. Her “Papa,” Alvin Hackett, stepped in to be her prom date, wearing an indigo-and-pink suit which matched her gown.

“My papa knew I [did not] have a date to my prom so he matched me,” the teen said.

Bell, who studies in Lancaster High School, was not able to have a date confirmed by the time of her prom. According to the teen, her potential dates “flaked out,” as per Yahoo Sports on April 25.

“It was really hard to find someone to commit to being my prom date,” she was quoted as saying.

She, however, had one more person in mind. “My grandpa was the only one that I knew would dress to impress,” she said. “So, I had asked him to take pictures with me.”

Hackett, a pastor in their local church, did not disappoint his granddaughter as he was able to match her Queen Mary of Scots-inspired gown. The 67-year-old supposedly enjoys dressing up, with “Family Feud” host Steve Harvey as his closet inspiration.

It was obvious that Hackett’s sense of style was also passed on to the 17-year-old, as she looked stunning in her ball gown with a cape. The teen posted her prom look on Twitter last April 21, saying, “Queen Kay, long may I reign.”

While Hackett was not allowed to go inside her prom venue, as dates must be under 21 years old according to Fox News, the grandfather-granddaughter pair enjoyed posing for the camera. Bell also got the full prom date effect — receiving a corsage from Hackett and giving him a boutonniere.

“I felt blessed. A lot of people don’t get to have opportunities like this,” Bell said as per Yahoo. “For my grandpa to be happy and eager to do it was amazing to me. I felt extremely loved.” Casey Eridio/JB