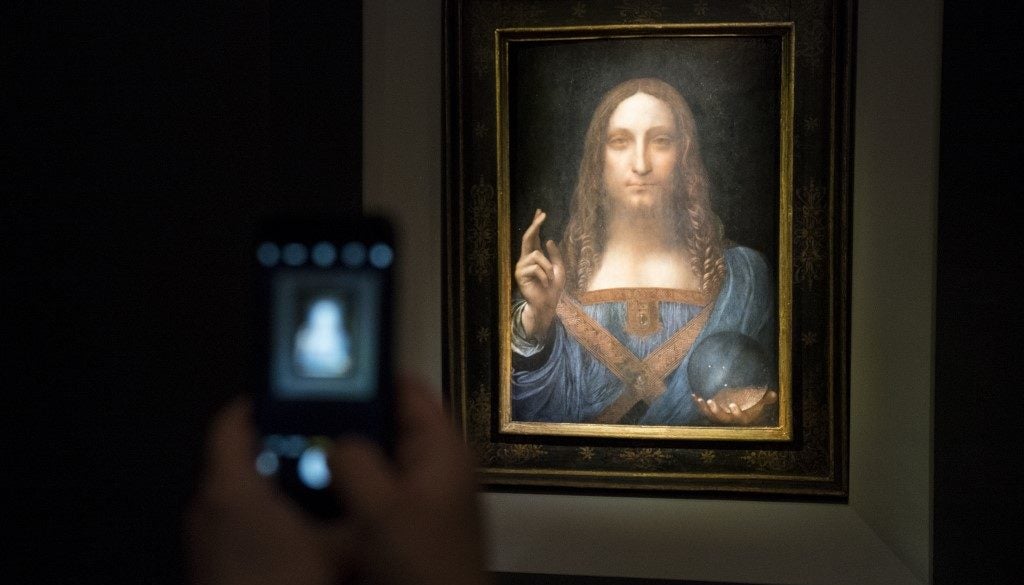 NEW YORK, NY - NOVEMBER 15: A visitor takes a photo of the painting 'Salvator Mundi' by Leonardo da Vinci at Christie's New York Auction House, November 15, 2017 in New York City. The coveted painting is set to be auctioned off on Wednesday night and has been guaranteed to sell for over $100 million.(Drew Angerer/Getty Images)

Mystery of ‘Salvator Mundi’, the world’s most costly painting

Later this year, the Louvre in Paris will host an exhibition of masterpieces by the Italian painter Leonardo da Vinci to mark his death 500 years ago in France.

But the work that in recent months has been the intense focus of scrutiny by the media and da Vinci specialists, may not be on show.

In 2017, “Salvator Mundi” was sold at auction by Christie’s as a work by da Vinci for a record $450 million. But it has not been displayed in public since, triggering doubts about its ownership, its whereabouts and its authenticity.

The painting, a portrait of Jesus, was to go on display at the Louvre Abu Dhabi in September last year. But its unveiling was postponed by the museum without any explanation.

The Louvre Abu Dhabi has kept tight-lipped about the identity of the buyer, saying only that the emirate’s Department of Culture and Tourism had “acquired” it.

And the mystery has further deepened ahead of a visit by Italian President Sergio Mattarella who will join France’s President Emmanuel Macron on Thursday on a trip to the Loire Valley to mark the anniversary of da Vinci’s death there in 1519, at the age of 67.

“The Louvre has asked the Department of Culture and Tourism in Abu Dhabi for the painting to be given on loan,” a Louvre spokesperson told AFP.

“But we have not yet had any reply.”

According to the Wall Street Journal, the buyer of the picture was Saudi prince Badr ben Abdallah, acting in the name of powerful Saudi crown prince Mohammed bin Salman.

He has never confirmed or denied the report.

Prince Badr was appointed to head the kingdom’s culture ministry in a government shakeup in June.

Saudi Arabia and the neighbouring United Arab Emirates are very close allies who are both engaged militarily in the war against rebels in Yemen.

Mohammed bin Salman (known as MBS) is also a close confidant of Abu Dhabi Crown Prince Mohamed bin Zayed who along with Macron opened the Louvre Abu Dhabi in 2017, the first foreign institution to carry the name of the great Paris museum.

The painting’s disappearance comes as MBS’s international reputation has taken a battering over the murder of dissident Saudi journalist Jamal Khashoggi in Istanbul, in which he denies any involvement.

Jesus is seen as a prophet within Islam, which prohibits any physical depiction of God. But the picture portrays him as a saviour and thus a deity.

Many art experts remain unconvinced of the painting’s authenticity.

“Certain details are very telling,” said Jacques Franck, a specialist in da Vinci’s technique, pointing to the poor depiction of a finger and other elements that are “anatomically impossible”.

He said that at the time the canvas was painted, da Vinci had his workshop complete certain paintings because he himself had very little time.

Daniel Salvatore Schiffer, another da Vinci expert, also believes the painting was not done by the Italian master.

“When you analyse the details, nothing is by Leonardo, it doesn’t have his spirit.”

Ben Lewis, an art historian who wrote “The Last Leonardo” said London’s National Gallery, which exhibited the painting in 2011, had not taken on board the advice of five experts who were sent to authenticate the painting.

Although two of them believed it was authentic, another didn’t, and the others were unsure. But the painting was presented at the exhibition as a genuine work by Leonardo da Vinci.

But Diane Modestini, who worked on the restoration of the painting from 2005, said she did not understand the controversy, insisting that “Leonardo da Vinci painted it”.

A Christie’s spokesman said, “We stand by the thorough research and scholarship that led to the attribution of this painting in 2010. No new discussion or speculation since the 2017 sale at Christie’s has caused us to revisit its position.”

The Louvre says its exhibition, due to open in Paris in the autumn, will bring together “a unique group of artworks that only the Louvre could bring together” in addition to its own outstanding Leonardo collection.

But whether people will be able to draw their own conclusions by actually seeing the “Salvator Mundi” remains to be seen.

“If the Louvre has still not received a response (from Abu Dhabi) months before the exhibition, it is because the work will not be exhibited there,” said Franck.

Schiffer said it could end up being a positive thing for the Paris gallery, which could see its “reputation and credibility tarnished” if the work was exhibited.