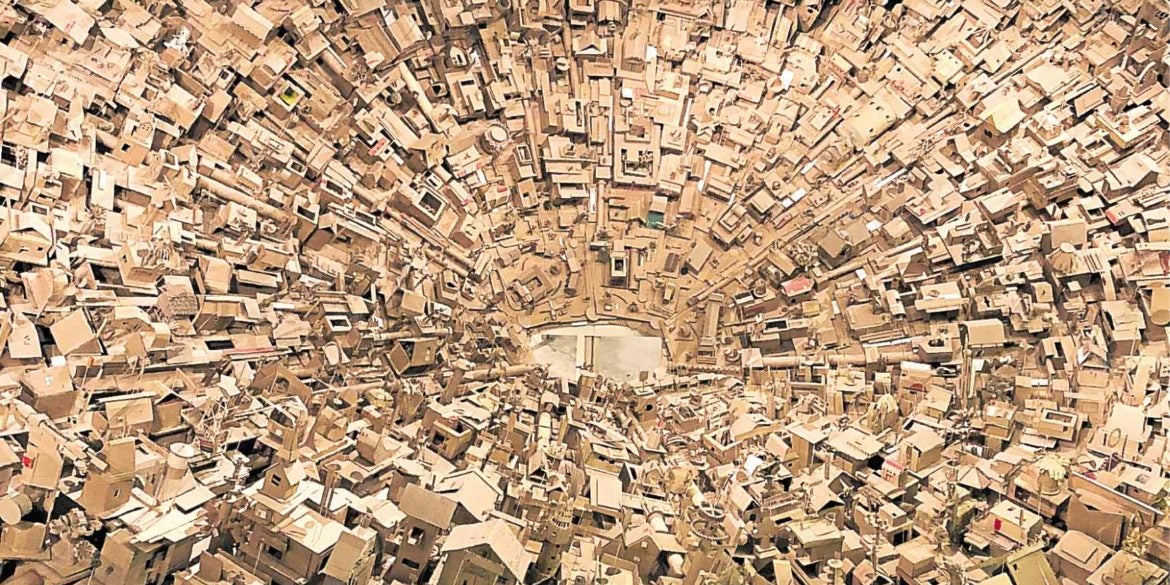 “Here, There, Everywhere: Project Another Country” by Alfredo and Isabel Aquilizan

The Irish poet W.B. Yeats wrote “The Second Coming” in 1919 in the aftermath of the Great War and its apocalyptic lines—“Things fall apart; the centre cannot hold;/ Mere anarchy is loosed upon the world”—continue to resonate in the 21st century.

In an exhibit at the Museum of Contemporary Arts and Design (MCAD), titled “The Center Will Not Hold,” which opened March 7, Alfredo and Isabel Aquilizan, Shilpa Gupta, Kim Heecheon, Manny Montelibano and Tintin Wulia, respond, like Yeats, to contemporary issues—economic, social, political, technological.

Upon entering the museum, visitors will see Montelibano’s “Unrestricted Areas”—a video installation showing a surveillance shot of a camera mounted in another lobby. On the far end of the museum is his other video installation, “Sorry for the Inconvenience.” Both works utilize technology to describe power and political structures.

“Lifting Barbells,” Kim’s single-channel video projected on a wall panel, is his attempt to reconcile with his grief after the death of his father. “[W]hy is the world still standing? We all know that the world is better as a deserted ruin, yet we still spare the life of this expired world,” he laments.

Commissioned by the Mao Jihong Arts Foundation, Chengdu, and Centre Pompidou, the Aquilizans’ massive work, “Here, There, Everywhere: Project Another Country,” is a large mixed-media installation covering almost half of the museum. The work consists of thousands of cardboard houses formed by volunteers where “individually built structures perform a collaborative function.”

On the mezzanine of the museum, visitors will find Wulia’s mural, installation, game-performance, and DIY kit with single-channel video work, titled “Terra Incognita, Et Cetera.” Two work series by Gupta are also in this area—the “Untitled,” pencil trancings on paper, and “100 Hand Drawn Maps of My Country,” carbon tracings on paper, which, like the Aqulizans’, was also collaborative.

Curated by Joselina Cruz, the show, according to the exhibition notes, aims to “give us opportunities to navigate away from a center, and build our own systems, and imagine alternative futures.” —CONTRIBUTED

“The Center Will Not Hold”  is on view until May 5.