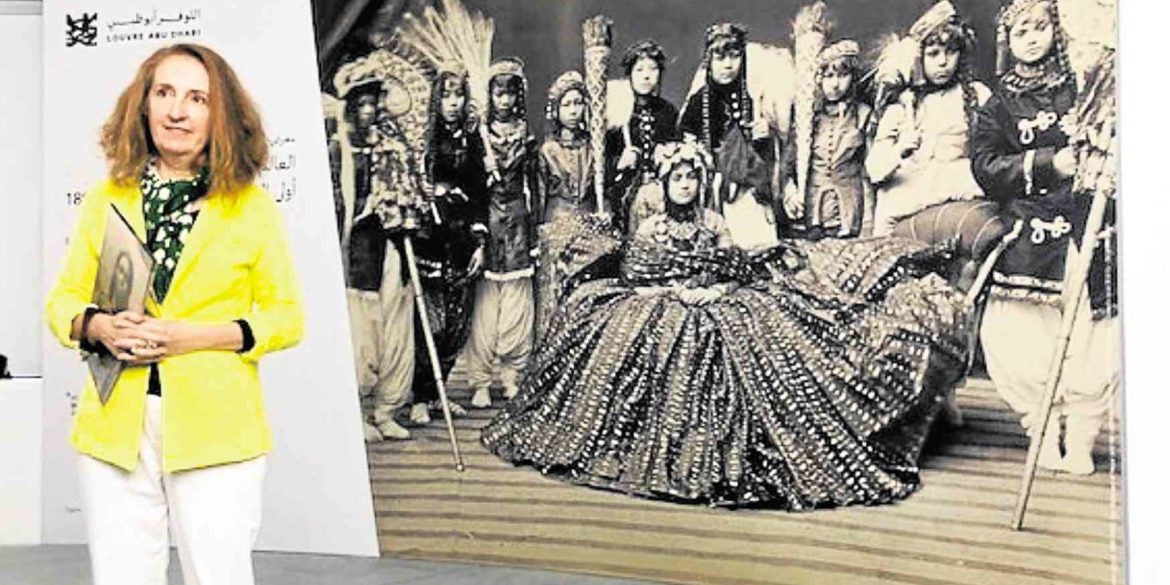 Christine Barthe, curator of LouvreAbu Dhabi’s first international photo exhibit, before a blown-up photo by Johnston and Hoffmann of theMaharani of Nepal and her ladies-in-waiting (1885-1894); fromMusée du quai Branly–Jacques Chirac. —LITO B. ZULUETA

The Louvre Abu Dhabi in the United Arab Emirates (UAE) has opened a major international exhibit of the earliest pictures taken of various places and peoples of the world, right after the invention of photography in 1839 by Louis Daguerre. The exhibit includes photos taken by Pedro Picon of Philippine indigenes in their native costumes, circa 1860s.

The more than 250 photographs come mainly from the collection of Musée du quai Branly-Jacques Chirac, and the exhibit is the first international exhibit of its kind by Louvre Abu Dhabi, the biggest art and civilization museum in the Arab world.

“A World of Exchanges, Photographs 1842-1896: An Early Album of the World,” said Louvre Abu Dhabi director Manuel Rabaté, “explores the evolution of photography as a universal medium and brings together under our dome, the collective stories of these photographers from all over the world.”

Inaugurated in November 2017 by UAE Prime Minister Rashid Al Maktoum and French President Emmanuel Macron, Louvre Abu Dhabi was designed by Jean Nouvel and appears like a floating dome on Saadiyat island. The dome’s lattice-like structure is supposed to mimic intertwining date palms, allowing sunlight to pierce through and winds to waft across.

Sponsored by the Bank of Sharjah, the photo exhibit is “a rare display of some of the earliest images taken by travelers and sailors in the Middle East, Africa, Asia, India, and the Americas,” said Rabaté. It shows how photography is a form of presentation and documentation, “and an instrument of discovering and understanding the world and its people.”

Overall, 44 countries are represented in the photographs.

Barthe, head of the photographic collections heritage unit of the Musée du quai Branly in Paris, said the photographs should document “many national histories.” “You may have information about the history of photography in India, in Turkey, in Chile. But there were no projects on global history.”

Inquirer Lifestyle was the lone Southeast Asian press agency given an exclusive preview of the exhibit ahead of its formal opening on April 25.

The exhibit shows the works of the first prominent international photographers, such as French ship captain Charles Guillain, who took pictures during a diplomatic voyage down the coast of Africa in 1847-48; and Auguste Bartholdi, who took pictures of Egypt, Nubia (Sudan) and Palestine, before he went on to sculpt the Statue of Liberty.

Other photographers include Désiré Charnay, an archaeologist who photographed the first pre-Hispanic sites in Mexico; Marc Ferrez, the first Brazilian photographer to win international recognition; William Ellis, an English missionary who traveled through Madagascar; Lai Fong, a Chinese photographer who established one of the early studios in Hong Kong; Kassian Cephas, the first Indonesian professional photographer; and Egyptian military engineer Muhammad Sadiq Bey, who took the first photographs of Islamic sites in Medina and Mecca circa 1881.

Also featured are the photographs of Lala Deen Dayal, an engineer by training who opened studios in different Indian cities; and the Abdullah Brothers who photographed the Ottoman elite in Constantinople.

Other photographers in the exhibit: Luis Garcia Hevia from Colombia, Pascal Sebah from Turkey, Alexandre Michon and Nikolai Charushin from Russia, Francis Chit from Thaïland, and Ichida Sôta and Suzuki Shin’ichi II from Japan.

The show also highlights historic photographs from the Philippines, including works by Pedro Picon. His album from Musée du quai Branly-Jacques Chirac contains an early selection of studio portraits in “carte-de-visite format.”

According to the exhibit catalog, Picon was active between 1860 and 1870 and owned a studio in Manila. He made his models pose in a “staging evoking nature (trees branches, stones) or an interior (balustrade, curtain).”

Mainly practicing portraiture, Picon, the catalog declares, “offered a first typological vision of the inhabitants of the archipelago in the years 1860-1870.” His works are “rare,” it added, and often appearing with his more familiar contemporaries, the American William Wightman Wood and the British Albert Honiss.

Historian and former National Commission for Culture and the Arts commissioner Regalado Trota Jose said, “Perhaps the oldest photographs of the Philippines appear to be with the Hispanic Society of America” in Washington. The Manila daguerreotypes were taken from the early 1840s to the early 1850s.”

Barthe said the exhibit “was born from a desire to present, in Abu Dhabi, some of the earliest photographic images recorded on earth.

“To meet this challenge, we had to shift focus and lead extensive research to look toward the new horizons of the birth of photography outside Europe and the United States,” she explained.

“This exhibition offers, for the first time, a global history of the first steps of photography, whose development in South America, Africa, the Middle East and Asia reveals a fascinating play of difference and similarity.”

The invention of photography in 1839 came at a time when several European powers were expanding their colonial empires in Africa, Asia, Americas and the Middle East. Photography subsequently crossed the borders of Europe, often accompanying diplomatic missions, military expeditions, marine exploration, religious missions, scientific research, and even tourism.

Thus, the photographs on exhibit, said Barthe, are governed by the “gaze” of the photographers, mainly European, who had taken them. She explained she was aware that the photographs might have “exoticized,” or “defined the foreignness,” of the Orient. In the catalog, she quotes the late Palestinian-American scholar Edward Said, the father of Orientalist criticism, who in turn had quoted Karl Marx—that those “who cannot represent themselves, must be represented.”

Barthe explains in the catalog that especially for French military-scientific expeditions in the mid-19th century, photography had its “own program of visual appropriation of the world,” since, quoting Said again, “All such widening horizons had Europe firmly in the privileged center, as main observer… For even as Europe moved itself outwards, its sense of cultural strength was fortified.”

Considering the caveat, the exhibit is, as the cliche goes, a visual feast. “I believe,” Barthe said, “it will be full of surprises for visitors, who will not only discover the first evidences of the visual mapping of the world, but also question our fascination and our dependence on photographic images.”