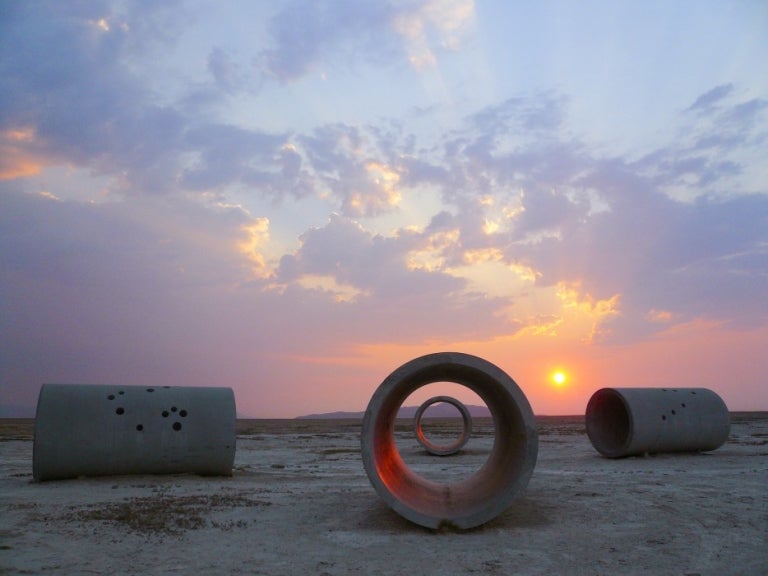 ‘Sun Tunnels’ artwork in Utah desert to be restored

The Dia Art Foundation announced that it will launch a major conservation project in May for Nancy Holt’s monumental artwork, on show in Utah’s Great Basin Desert. This will be the first time that “Sun Tunnels” will undergo restoration work since its conception in 1973.

“Sun Tunnels” is composed of four concrete cylinders, each 18 feet long and 9 feet in diameter. Arranged in an “X” formation, the cylinders are aligned to frame the sun on the horizon during the summer and winter solstices. At the top of each tunnel, Holt drilled small holes representing the constellations Draco, Perseus, Columba and Capricorn.

The 10-day renovation will target the cracking and erosion of the concrete that forms the tunnels, caused by exposure to extreme conditions in Utah’s Great Basin Desert.

Overseeing the project, president and chief conservator of RLA Conservation Rosa Lowinger told The Art Newspaper that the graffiti scrawled on the artwork by visitors over the years will also be removed.

“Sun Tunnels” was acquired by the Dia Art Foundation in 2018 with the support of the Holt/Smithson Foundation, which aims at preserving the artistic legacies of Holt and her husband Robert Smithson. It was the first work of land art created by a woman to enter the foundation’s collection.

The land art movement, which emerged in the 1960s and 1970s, features a series of artworks that were made directly in the landscape — either by sculpting the land itself or by using natural materials such as rocks or twigs. Holt was among the most important contributors to land art, with Smithson and Michael Heizer.

“Nancy Holt’s ‘Sun Tunnels’ is landmark earthwork that is central to the future of art history […] This conservation of ‘Sun Tunnels’ is emblematic of Dia’s undertaking to enable long-term and direct experience of artworks that have built the ground of art today,” said Lisa Le Feuvre, executive director of the Holt/Smithson Foundation, in a statement. JB

Elmer Borlongan, by the book