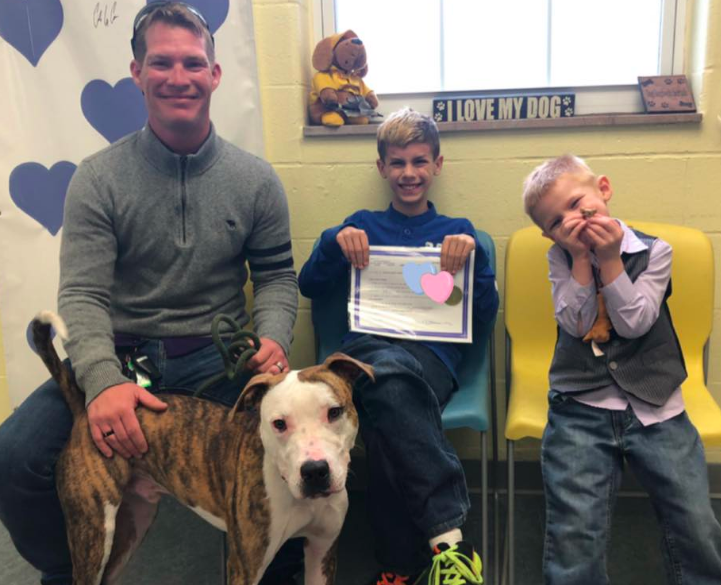 A dog is considered a man’s best friend by many and one boy from Michigan, United States can say the same when it comes to his shelter dog. For one, they already share something in common: they were both adopted on the same day.

Gabe Banzhof has always addressed his stepfather “dad” ever since, but he was only legally adopted by him just this April, as per WTOL last April 18.

As if by fate, the Banzhofs also decided to adopt Cupid, a dog they came to know by coincidence, on the same day. The unexpected meeting happened when Gabe’s mother Jessica had to go out to buy pet food and came upon Cupid who was at that time on a field trip with the Lucas County Canine Care and Control.

“You know, we were petting and everything and I was asking questions because I’m an animal lover,” Jessica was quoted as saying. “And she mentioned, ‘actually this dog is available for adoption’ and I was like ‘oh no.’”

It took the family only three visits to the shelter before they finally decided to take Cupid home — and on the same day Gabe was officially adopted by his stepfather, no less.

The occasion was momentous for the family, and for Gabe especially, who finally has a dad to call his own.

“Afterwards we just looked at each other and smiled,” Gabe said in the report. “I was just thinking, ‘wow, he’s officially my father.’”

The animal shelter has since shared a photo of the special occasion on their official Facebook page showing the Banzhofs ready to take Cupid home.

“We had a pretty amazing adoption happen today…” wrote the shelter on April 18. “Cupid got adopted by a family that couldn’t be a better fit for him, and what’s even more amazing is that the family officially adopted their son (in the middle) today as well!!”

Meanwhile, Gabe has said that Cupid is the one that means the most to him despite having other dogs at home. He also said Cupid was a bit aloof at first, but did not take long to adjust to his new family.

“At first he was a little shy,” Gabe said. “Then as he started to get used to us, he started playing.” Cody Cepeda/JB