Student graduates in hospital room before passing away | Inquirer Lifestyle 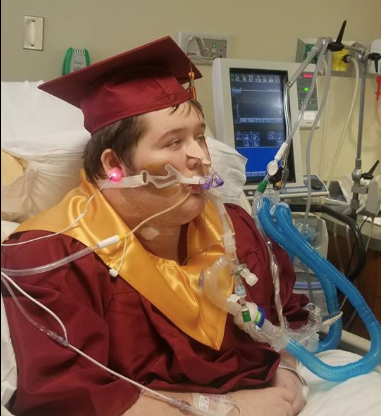 Student graduates in hospital room before death due to muscle disorder

A nineteen-year-old student from Tennessee, United States would not be able to attend his graduation, so his school brought the occasion to his own hospital room, days before he passed away.

Dakota Johnson, a student of Science Hill High School in Johnson City, was born with Duchenne muscular dystrophy, as per WJHL on April 26. The disorder is one of nine types of muscular dystrophy and is characterized by progressive muscle degeneration and weakness, according to the Muscular Dystrophy Association.

Johnson was able to complete his schoolwork and was all set for graduation, but his disorder made it impossible for him to attend the ceremony. At this point, the staff of Johnson City Schools and the Johnson City Medical Center organized his graduation ceremony, in his own hospital room.

His homebound teacher Alison Russell spearheaded the ceremony after he was admitted to the hospital for heart failure last April 19, as per report. Johnson has been in homebound schooling since the seventh grade, and graduating was one of Johnson’s goals this school year —  an objective Russell was determined to make happen.

Johnson passed away in the early morning of April 26. His passing was marked by Johnson City Schools Superintendent Steve Barnett, who was also present during his graduation.

“We are very saddened to learn of the passing of Dakota Johnson…” Barnett said in a statement. “Dakota’s persistence and hard work earned him his degree and we were honored and grateful to bring graduation to him to allow him and his family to enjoy a very special moment.”

A fundraiser has been launched for Johnson’s funeral. Cody Cepeda/JB