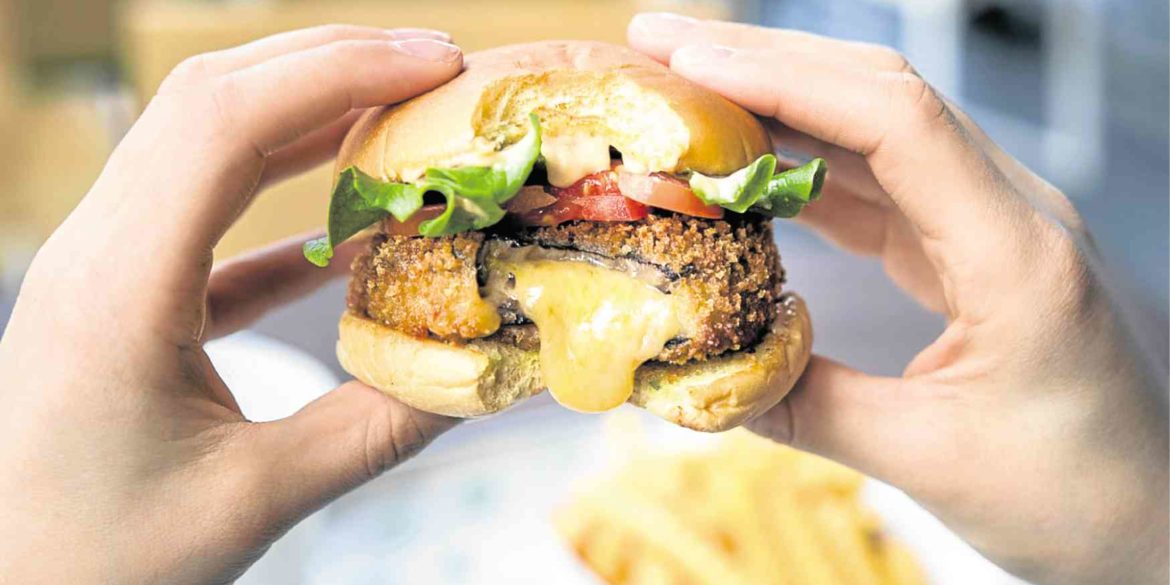 Cheese oozes out of a ‘Shroom Burger

Burger fans have long known that US-based Shake Shack is putting up its first store at Central Square in Bonifacio Global City. On Monday it was announced that the grand opening will be on May 10 on the ground level of the mall.

Lifestyle was one of 40 guests invited to the food tasting where we sampled favorites like the ShackBurger (cheeseburger with lettuce, tomato, proprietary Shacksauce), ’Shroom Burger (crisp-fried portobello mushroom filled with muenster and cheddar, topped with lettuce, tomato and Shacksauce), crinkle-cut fries, and the Shack-cago Dog—a play on Chicago, a city known for loading its hotdogs with a variety of fixings.

Aside from the fan favorites mentioned, the store will offer a Manila-exclusive menu including an Ube Shake (frozen vanilla custard blended with ube), Calamansi Limeade, craft beers from Engkanto and Monkey Eagle, and three unique “concretes”—a term used to describe frozen custard blended with mix-ins.

SFRI, one of the subsidiaries of Stores Specialists Inc. (SSI), is the exclusive franchise holder of Shake Shack in the Philippines.

“We considered other local brands, but these were the ones that fit Shake Shack’s taste profile,” said Sarmenta. “For example, Bucky’s brownies really go well with our frozen chocolate custard, while the beers pair well with the burgers.”

It started with the ’dog

“Not everyone is aware that before the burgers, there was our Chicago-style hot dog,” said Mark Rosati, Shake Shack’s culinary director. The Shack-cago Dog is “dragged through the garden” and served with relish, onion, cucumber, pickle, tomato, pepper, celery salt and mustard.

Rosati is in the country to help oversee the grand opening and ensure everything runs smoothly.

In the 2017 book, “Shake Shack: Recipes & Stories,” Rosati pinpoints the moment he gets the “most perfect burger bite: when the interior juices of the burger meet the creaminess of the cheese, comingle, and create a natural sauce. It’s the most primal, simple and pleasurable expression of what a great burger is all about.”

The new restaurant with its sleek counter and park-style slatted benches took over space previously occupied by the mall concierge, the Michael Kors boutique, and a portion of Pottery Barn. It can seat approximately 120 people.

Good news for people watching their budgets: Shake Shack’s burgers, fries, hot dogs and frozen custards are less expensive than those sold at branches in the US, Hong Kong or Singapore.

From his shirt pocket, Sarmenta pulled out a handwritten list comparing prices in the four locations. The burgers are 21 percent cheaper in Manila than Hong Kong, and 19 percent cheaper than Singapore.

The Manila fries are priced a third less than in the US, Hong Kong, and Singapore stores; the same goes for frozen custards.

“We import most of our ingredients from the US including the Angus beef, the potato buns and the frozen custard,” Sarmenta said, adding that a freezer room was constructed exclusively for Shake Shack perishables and kept at a frosty temperature.

“We’re proud to finally unveil our Manila menu that was created with high standards of excellence… that will provide a value that is accessible for our Filipino customers,” Anton Huang, SSI Group president, said in a statement. “We’re proud of the company’s mission to Stand for Something Good. Our burgers and hot dogs use 100 percent all-natural beef, free of hormones and antibiotics. Our potato buns are non-GMO, and the custards are made from real sugar, no corn syrup.”