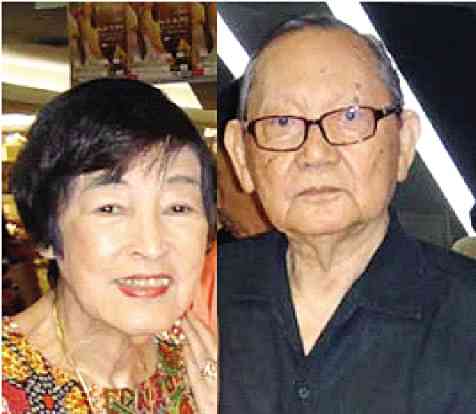 Tessie Ojeda Luz passes away at 89

The couple had just renewed their marriage vows last March 30 after 56 years of marriage, according to youngest daughter Claudia.

She added that her father, who turns 93 this November, is taking his wife’s passing as well as can be expected.

“He know’s she’s in a better place now,” she said.

Tessie Ojeda was a theater artist when she met the modern art pioneer. The couple opened the Luz Gallery in 1960, but it was Tessie Luz who actually ran it and made a success of it.

The gallery became an important venue for exhibiting the work of contemporary Filipino artists, most notably Luz himself, who was named National Artist for the Visual Arts in 1997.

According to family friend Ambeth Ocampo, it was Tessie who enabled Arturo to focus on his painting, taking care of the day-to-day business of running the Luz Gallery, and also maintaining an active social life for both of them.

Tessie was vivacious and extroverted, and loved being in the thick of society goings-on, while Arturo was more reticent and intellectual. But somehow, they made a perfect match.

“My father once told me that the secret of their marriage was they never got angry at the same time,” says Claudia.

Tessie leaves behind her husband Arturo and daughters Angela, Luisa and Claudia. The couple’s eldest daughter Paola, a photographer and musician, died in 1991.

Tessie Luz’s remains will lie in state at the Capilla de la Virgen, Santuario de San Antonio Chapel in Makati until Friday, May 3, when they will be laid to rest in a crypt beside Paola’s after a 1:30 p.m. Mass.