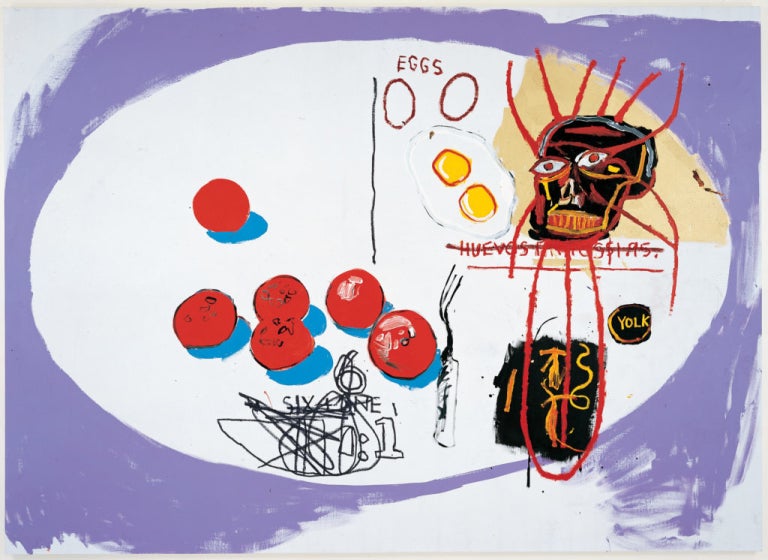 This summer Jack Shainman Gallery will host the exhibition “Basquiat x Warhol”, which explores the artists’ creative exchanges during the final years of their lives.

The show features seven collaborative paintings made between 1984 and 1985, including “Eggs”. It also comprises individual works by both artists, among which are Warhol’s 1986 “The Last Supper (Camel/57)” and large-scale oil and acrylic paintings by Basquiat.

The exhibition will also include Basquiat’s “Untitled (Football Helmet)” sculpture, which features the artist’s own hair. As a testament to their friendship, he instructed Warhol to hear the helmet for 24 hours to understand what it felt to be observed as a black man in America.

Warhol and Basquiat were formally introduced in the fall of 1982 by art dealer Bruno Bischofberger. The pair soon formed a personal and professional relationship, which lasted until Warhol’s death in 1987.

Basquiat and Warhol’s collaborative works were met with harsh criticism at first. “[T]he collaboration looks like one of Warhol’s manipulations […]. Basquiat, meanwhile, comes across as the all too willing accessory,” wrote New York Times art critic Vivien Raynor in a review.

“It was like some crazy Art-world marriage and they were the odd couple. The relationship was symbiotic. Jean-Michel thought he needed Andy’s fame and Andy thought he needed Jean-Michel’s new blood. Jean-Michel gave Andy a rebellious image,” explained Warhol’s longtime studio assistant Ronny Cutrone in Victor Bockris’s book “Warhol: The Biography”.

“Basquiat x Warhol” will be on view at Jack Shainman Gallery’s The School location in Kinderhook, New York. The exhibition will run from June 1 through Sept. 7. JB

Mandela prison drawing goes under the hammer in US