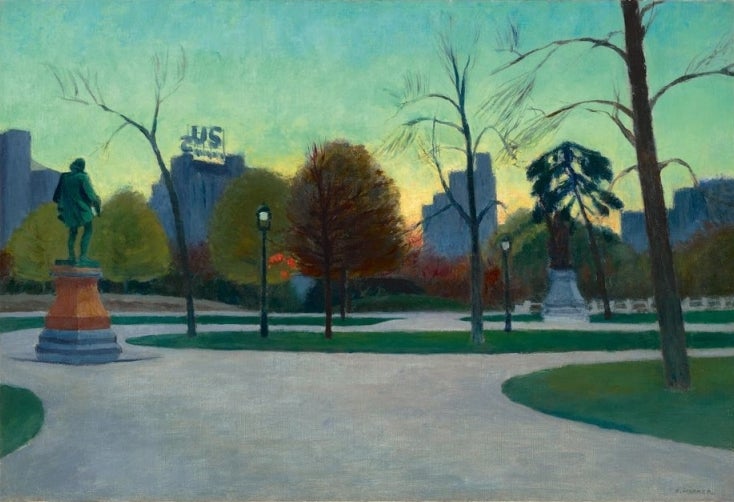 Sotheby’s revealed on Friday, April 26, that Edward Hopper’s painting, “Shakespeare at Dusk”, will be offered at its upcoming American Art sale. The announcement coincided with the date scholars believe to be the playwright’s birthday.

“Shakespeare at Dusk” depicts a statue of the Bard made by John Quincy Adam Ward in New York’s Central Park at twilight. The 1935 oil painting is part of a series of New York cityscapes, which also comprises the iconic “Nighthawks”.

It is estimated to sell for between $5 and $7 million — a far cry from the artist’s auction record of $91.9 million set last November at Christie’s for “Chop Suey”.

“Shakespeare at Dusk” testifies to Hopper’s interest in literature and poetry, which is alluded to in most of his paintings. Art historian Gail Levin states that the title is a reference to Shakespeare’s famous “Sonnet 73”, which describes an autumnal twilight:

“That time of year thou mayst in me behold
When yellow leaves, or none, or few, do hang
Upon those boughs which shake against the cold,
Bare ruined choirs, where late the sweet birds sang.
In me thou see’st the twilight of such day
As after sunset fadeth in the west
Which by and by black night doth take away,
Death’s second self, that seals up all in rest.”

Auction houses venture into the market of AI-generated art