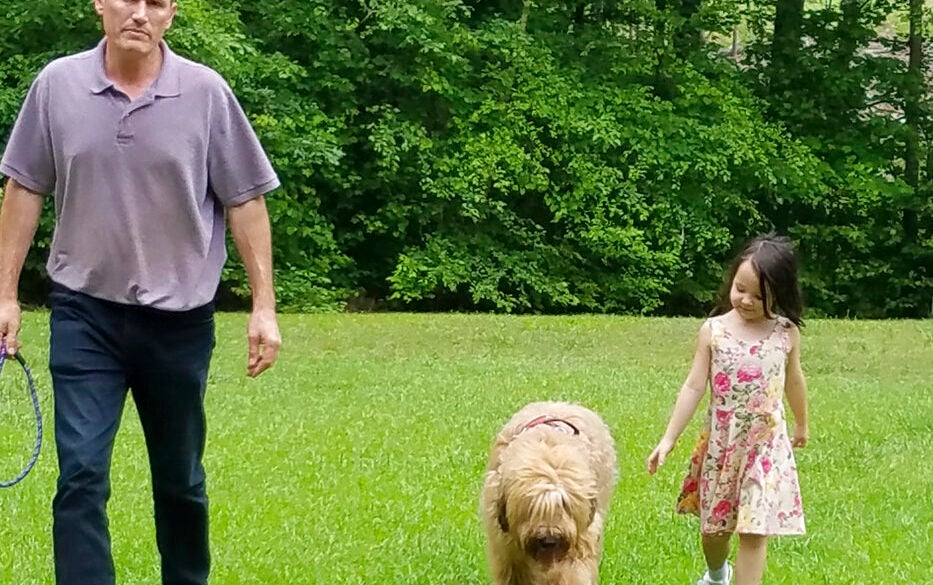 This May 23, 2018 photo provided by Rebecca Peluso shows Mark Mathis, owner of Ry-Con Service Dogs, during a training session with Ella Peluso and her service dog, Puzzle2, at Ry-Con's facilities in Raleigh, N.C. Peluso says the dog became increasingly difficult to handle. "The final straw was her knocking down one of my twins trying to pull her top off and clawing my daughter's legs up. My daughter was afraid of the dog and didn't want to be in any room the dog was in after that incident." (Rebecca Peluso via AP)

APEX, North Carolina–All the counseling, therapy and medication did little to ease 9-year-old Sobie Cummings’ crippling anxiety and feelings of isolation. And so a psychiatrist suggested that a service dog might help the autistic child connect with other kids.

To Glenn and Rachel Cummings, Mark Mathis seemed like a dream come true. His kennel, Ry-Con Service Dogs, was just a couple of hours away, and he, too, had a child with autism. But what clinched the decision were Mathis’ credentials.

“Is Ry-Con a certified program? Yes,” stated an online brochure. “In 2013, Mark was certified as a NC state approved service dog trainer with a specialty in autism service dogs for children.”

Ten months and $14,500 later, the family brought home a shaggy mop of a dog that Sobie had come to view as her “savior.” But when they opened the front door, Okami broke from Glenn Cummings’ grasp and began mauling one of the family’s elderly dogs — all as Sobie watched from the stairs in mute horror.

It was only after they had returned Okami and asked for a refund that the family learned the truth: Mathis was not a state-certified dog trainer. In fact, North Carolina has no such certification program — and neither does any other state.

The service dog industry — particularly in the field of “psychiatric” service dogs for people with autism and post-traumatic stress disorder — has exploded in recent years. But a near complete absence of regulation and oversight has left needy, desperate families vulnerable to incompetence and fraud.

“It is a lawless area. The Wild West,” says David Favre, a law professor at Michigan State University and editor of its Animal Legal and Historical Center website.

Properly training a service dog can take up to 1 ½ years and cost upward of $50,000, depending on the tasks it is taught to perform. But the Americans with Disabilities Act does not require that a service dog be professionally trained or certified. And, according to the U.S. Department of Justice , local and state agencies are prohibited from requiring that the dogs be registered.

“It needs to be specially trained to do tasks that relate to the person’s disability, but it doesn’t say anything about who does the training or the quality of training or the efficacy of it,” says Lynette Hart, a professor of veterinary medicine at the University of California, Davis. “So it’s a very broad, wide-open barn door.”

The ADA allows people to train their own service dogs. But Hart, who has co-authored studies of the industry, says most don’t have the time, wherewithal or confidence to do so, and that puts needy families “in a calamitous situation.” ”They’re easy prey,” says Hart, whose late brother had autism.

In 2012, the state of Illinois sued Lea Kaydus and Animals for Autism over a “heartless scam” in which she took several thousand dollars from families but never matched them with dogs. Kaydus was ordered to pay restitution.

And last year, Virginia Attorney General Mark Herring filed suit against Service Dogs by Warren Retrievers Inc., which advertises dogs trained to help people suffering from diabetes, PTSD, seizure disorders and autism. The lawsuit alleges that the diabetes-alert dogs, for which Warren charged up to $27,000, “were often poorly trained, ill-behaved, and unequipped to help manage a life-threatening situation, rendering them little more than incredibly expensive pets.”

Attorneys for owner Charles D. Warren Jr. say the state’s case is based on the complaints of “a few disgruntled and fanatical consumers” who “cannot be satisfied and refuse all attempts at accommodation and reason.” A trial date has not been scheduled.