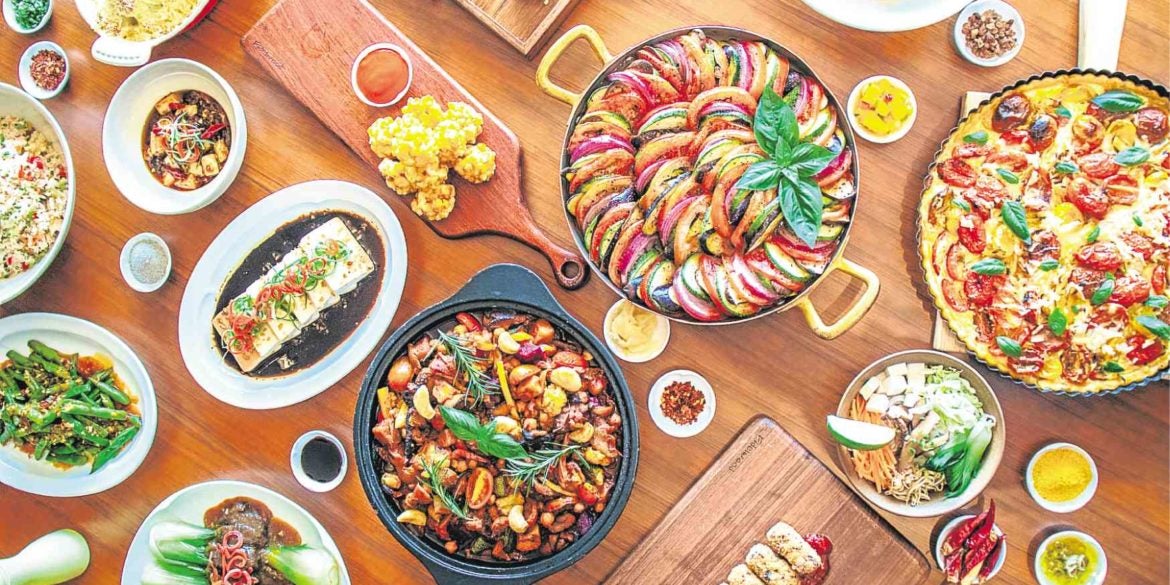 Beyond Meat BBQ Cheeseburger is part of the Green Monday buffet at Grand Hyatt Manila in Taguig City. It features other vegan options such as chili cheese dog, spaghetti bolognaise, dumplings, sweet and sour “pork” and Korean-style glazed fried “chicken.”

It is so weird that they’re not “meat-meat,” because everything legit looks like pork or beef. While some dishes call for cauliflower, most are made of Beyond Meat, a California brand of certified vegan meat made of peas and fava beans.

The Beyond sausage sizzles like meat on the griddle; the cubes and patty have real pork mouthfeel. It’s so satisfying it feels like cheating.

So it’s not surprising that among the Beyond Meat
investors are business magnate Bill Gates and Twitter cofounders Biz Stone and Evan Williams.

Executive chef Mark Hagan says there were a lot of requests for vegan options, so he approached Beyond and other suppliers of plant-based ingredients.

“The cheese is made of almond milk set with agar-agar seaweed, and colored with turmeric. Ketchup and mayo are vegan, too, and we have a dedicated cooking station for these dishes to avoid contact with any animal product.”

Hagan assures that Beyond Meat is free of hormone, antibiotic, soy or gluten. He considers it “the future of food,” since the “impact on the environment is amazing.”

The Grand Kitchen offers daily buffet for lunch (P1,906 per person) and dinner (P2,200). On Sundays, it becomes a crossover brunch (P2,400) which includes charcuterie and tapas from The Cellar.

Dishes are cooked à la minute in an open kitchen, which means guests gets their food fresh
—and they can take photos.

Every Green Monday, half of the buffet displays vegan dishes that can be ordered à la carte on other days (at around P700 per burger, so please go on a Monday). The other half consists of regular buffet stations: starters, seafood, Asian, pastas, carving and desserts.

Another popular Green Monday item is the Beyond Sausage—bratwurst served in a pretzel bun with sauerkraut, pickles, tomato and mustard. One may also have it as a Tokyo Dog with wasabi aioli, teriyaki sauce and tempura crumbs.

Regional options are moussaka, kofta, eggplant parmigiana, braised cabbage. Our challenge for chef Hagan is to come up with a vegan adobo.

Save space for the Kimchi Fried Rice with gochujang, cabbage and Beyond Meat.

Vegan dessert is mango-
coco pudding. If one can have dairy and eggs, we recommend the crepe with your choice of filling (mango, banana, cherry, Nutella—or everything), and the chocolate fondant, The Grand Kitchen’s rendition of lava cake with rich chocolate and a side of vanilla ice cream.