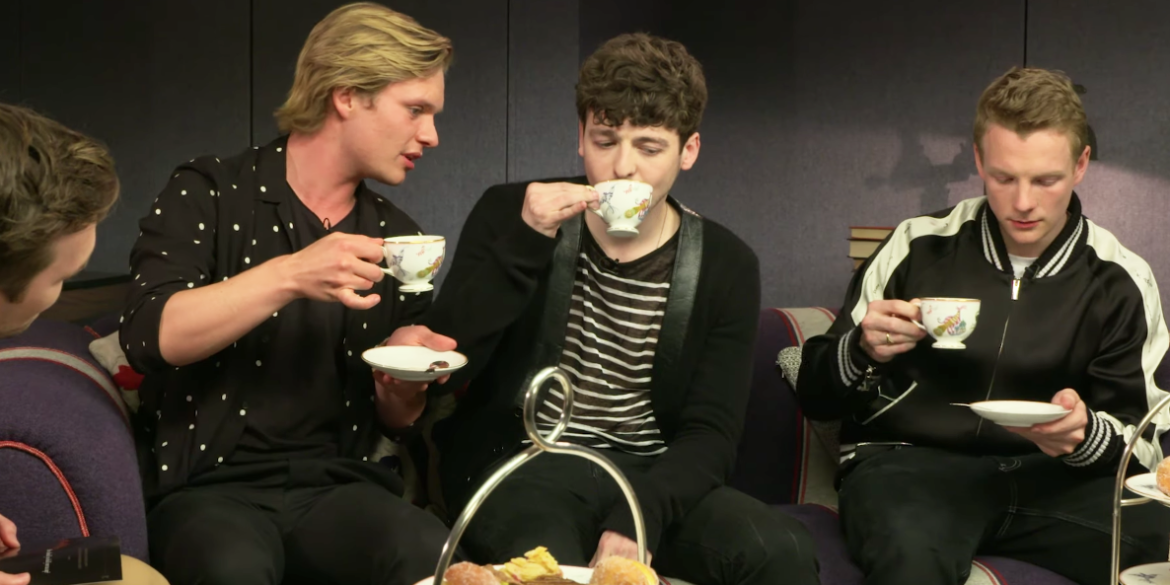 The cast of the upcoming Tolkien, about the formative years of The Lord of the Rings author, come together to talk about a very important topic: Tea.

Together, they friends self-styled as the Tea Club Barrovian Society, or TCBS, which is a real thing.

According to an essay on Tolkien’s tea club on The Imaginative Conservative, “They had been designated ‘librarians’ as an honor, and the several of them created the Tea Club when they began to put their used tea leaves in with the litter to be cleaned by the cleaning staff. Library rules prevented them from drinking tea, but they drank it covertly, revealing themselves only through the leaving of the tea leaves.”

“Through the TCBS, Tolkien felt his first comradery in a group of all males, among friends dedicated to something higher than themselves,” writes Bradley J. Birzer. “They were armed with intellect, talent, and the desire to better the world. It was a powerful action, Tolkien knew, and he certainly never outgrew this youthful enthusiasm for the all-male company or, as Edmund Burke would have described it, his little platoon.”

“Tea” also happens to be a legit entry on Tolkien Gateway. According the the Wiki site, “Tea was a beverage that the Hobbits (specifically Shire-hobbits) enjoyed alone or socially. A time of resting and relaxing, the tea-time was considered a meal on its own, between lunch and dinner. It was customary to offer guests for a cup of tea.

“Bilbo Baggins invited Gandalf for a cup of tea when he unexpectedly arrived to Bag End. After his invitation, Gandalf showed up with Thorin and Company. In a poem, the Lonely Troll served Perry-the-Winkle some ‘fulsome tea’.”

In the video from Fox Searchlight, the guys address questions like: When should you pour the milk into the cup?

“It’s not afterwards unless you’re a psychopath,” says Nicholas. “Were you going to say before?” he asks Tom.

Tom responds, “A lot of people I’ve met in the past have done it before, and with the tea bag in the cup! Psychotic, if you ask me.”

They continue to cover a range of tea-related quandaries, such as:

A Part 2 of tea etiquette with the TCBS just dropped! Check it out here.

Avengers Endgame: What does mass grieving look like? [SPOILERS]