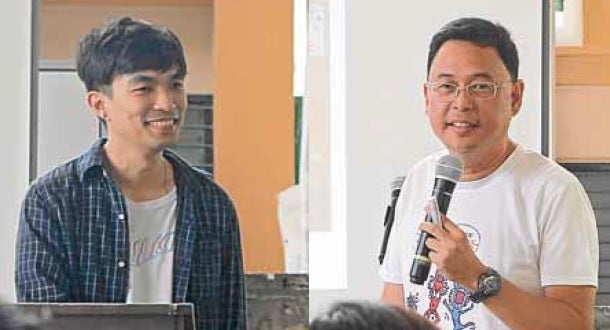 Empowering Cebu’s literature for its youth is one of the focal points of “Joy to the Word,” a program of the National Commission for Culture and the Arts (NCCA), Komisyon sa Wikang Filipino and Cebuano Studies Center for the National Literature Month (NLM).

“Joy to the Word” is a series of talks, workshops and dramatic readings that highlighted the experiences and works of Cebuano writers and artists. It was held at the University of San Carlos-Downtown Campus April 4-6.

Dr. Hope Sabanpan-Yu of the National Commission on Literary Arts said that there’s a need for Cebu’s youth to be exposed to Philippine and Cebuano literature because she saw how they were taken with the art of reading.

“This is where we can meet and bring the joy of the readings to the students so they will be able to appreciate and be part of the promotion of literature,” Sabanpan-Yu said.

Cebuano literature has been consistently growing with more locals producing works and getting more recognition in the national literary scene.

The recent proclamation of Cebuano writer Resil Mojares as National Artist for Literature is one of the inspirations of the young writers. Another motivation of the local community to continue producing works is the inclusion of Cebuano as a category in the Don Carlos Palanca Memorial Awards for Literature.

Numerous literary groups such as Bathalad-Sugbo, The Women Writers of Cebu, Mga Anak sa Dagang and The Stray Poets Collective have been constantly producing works and getting more members to enrich the city’s literature.

Simeon Dumdum, award-winning poet and one of the featured writers in “Joy to the Word,” said that there are many young people who are writing fiction and poems because of the emergence of these groups and competitions that are open for the Cebuano language.

He added that their literature has also linked not only writers from different generations but also to different art forms.

College and senior high school students, most of them coming from the science and business strands, were the active participants in “Joy to the Word.”

National Literature Month is celebrated every April and is initiated by the NCCA. Different literary activities are held all around the Philippines. The theme this year is “Buklugan Panitikan” which is inspired by the indigenous group Subanen’s buklog or the traditional thanksgiving ceremony at the beginning of planting and harvest seasons. —CONTRIBUTED