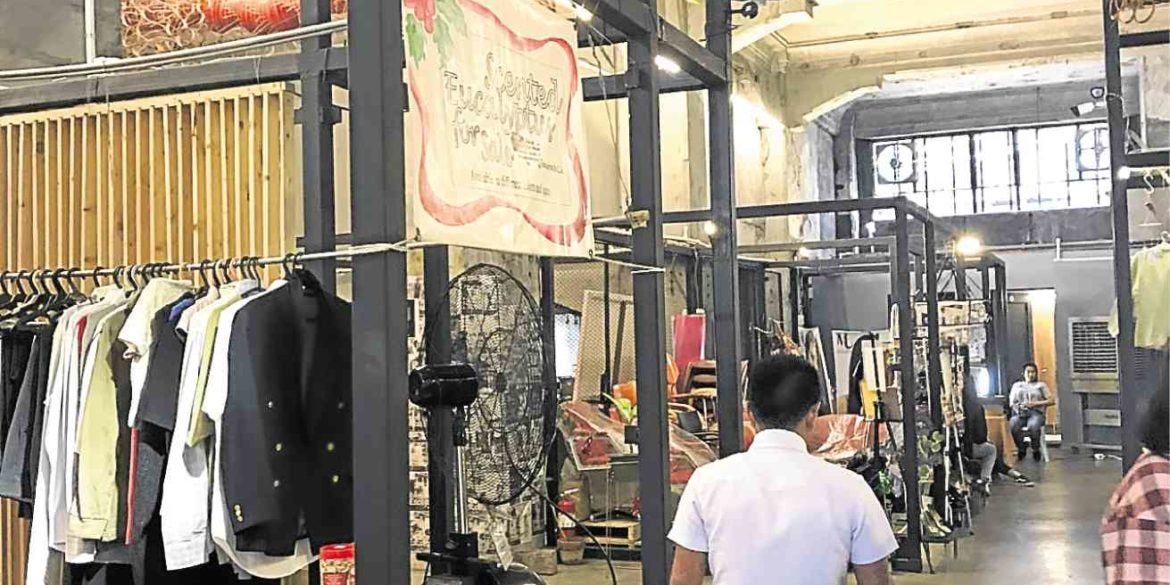 Old center of luxury retail aspires to rise again, but as an artistic, artisanal axis

Before the all-under-one-roof retail mall came into being, particular areas or streets were often designated for particular items and products. In pre- and early postwar Manila, there was Carriedo for shoes, Raon for music, Divisoria for fabrics, and Central Market for fresh produce.

And there was Escolta —dubbed “Queen of the Streets,” or, more flamboyantly, the “Rodeo Drive” of yesteryears—for high-end imported items.

A row of elegant Spanish and American structures was designed by notable architects of the day, such as the artist Juan Luna’s son, Andres Luna de San Pedro. Many of these stately buildings have been left to deteriorate badly—they are sadly under threat of demolition, bereft of any consideration for restoration, retrofitting or adaptive reuse.

Today, there is one building that has openly defied its age, 90 years, and has vigorously accepted facelifts—and soul lifts—by infusing its halls with activity and youthful spirits. “From 2013 to 2015,” said Marika Constantino, “98B COLLABoratory (98B), in partnership with the First United Building (FUB), has been organizing the Saturday X Future Market @ Escolta ([email protected]).”

Constantino pointed out: “Through the monthly events, we were able to meet a lot of creatives and were able to help jump-start a number of artistic and imaginative efforts.”

In 2013, Constantino, along with some members of the Heritage Conservation Youth sector, spearheaded the revitalization of Escolta. They had the support of Robert and Lorraine Sylianteng, proprietors of FUB (formerly the Perez-Samanillo building, designed by Luna de San Pedro).

“The program aimed to provide a platform for fellow creatives, while also giving them the opportunity to meet and eventually collaborate,” said Constantino, affording “an alternative experience, from the usual mall setup where buyers are not given the opportunity to get to know the people behind the goods they see and purchase.”

By 2016, the experience led to the “inspired” concept, Hub: Make Lab (Hub), which is a bustling nest of creative activity, retail stores with unique artisanal products, a “period” barber shop, a coffee shop named The Den that serves local grounds which easily match imported brands.

“It is for sellers and concessionaires of crafts, interesting artworks, limited independent clothing labels, DIY wares, vintage goods, refurbished antiques and other locally produced items,” Constantino explained. Hub is an all-in-one place that you can use as a studio, workshop and retail space.

“Creatives can use Hub as a jump-off point to test the market or to start the business that they have long wanted. The terms are very reasonable and accessible,” added Constantino, as she looked up at the giant, colorful, centipede-like art installation overhead.

Happily thriving, aside from The Den, are Folk (barbershop), MNLT (milk tea bar), The Heritage Collective, with its selection of secondhand objects and clothes, and Kahilom, whose brand does not have a sign, but is written on a board that gives its Instagram and Facebook IDs.

While the Syliantengs or the occupants of Hub do not foresee Escolta regaining its former glory, they look forward to a modest revival of an artistic, artisanal nature, encouraging exploration and educated experimentation that will give rise to fresh ideas, going against today’s environment that is slowly but surely becoming a repetitive, cookie-cutter culture.

Constantino has moved on to other concerns and now resides in New York City, yet she seems to have left her heart in Escolta. She has entrusted the continuation of its revitalization to her colleagues, and the ever-supportive Sylianteng couple.

“With everyone’s help, we hope that Hub can be a makers’ locale,” she said, “a place where creatives can work, play, imagine and dream. More than the commercial aspect of Hub, we want it to be a place that inspires collaboration, motivates people to respect heritage, stimulates reveries, encourages new experiences and promotes sustainability.”—CONTRIBUTED