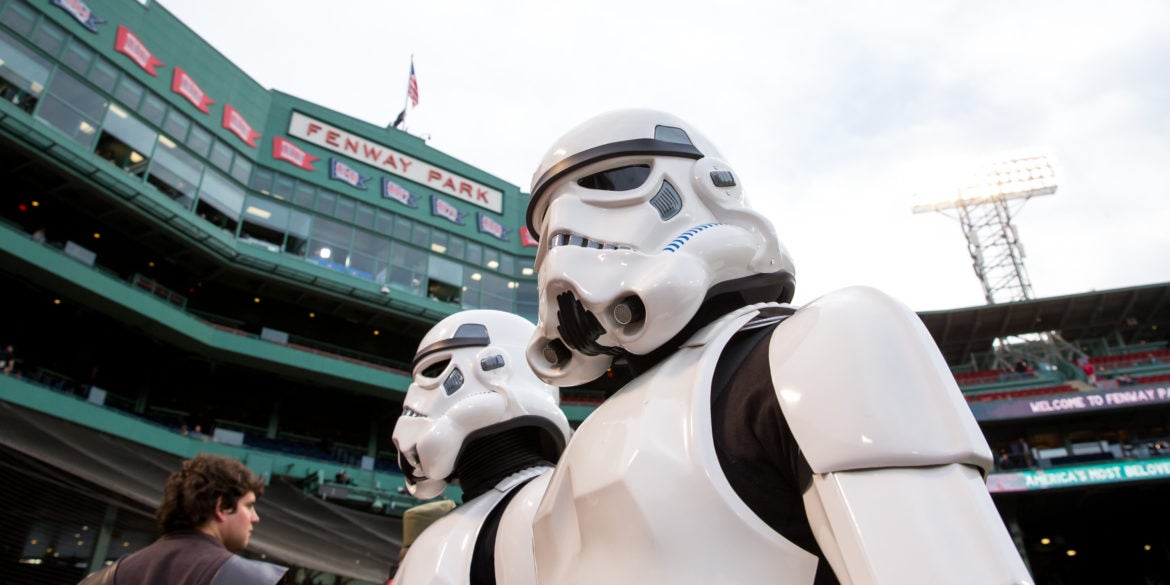 BOSTON, MA - APRIL 25: Stormtroopers stand on the field before a game between the Boston Red Sox and the Detroit Tigers during "Star Wars Night" at Fenway Park on April 25, 2019 in Boston, Massachusetts. The Red Sox won 7-3. Rich Gagnon/Getty Images/AFP *** Local Caption ***

Disney sets dates for next three ‘Star Wars’ films from 2022

Following its merger with Fox, Disney on Tuesday sketched out its future plans for two of its most towering franchises — the “Star Wars” saga and “Avatar.”

Three new as-yet untitled “Star Wars” films will hit the big screen every other year just before Christmas starting in 2022, the mega-studio announced.

That means that there could be a three-year wait between the December release of “Star Wars: The Rise of Skywalker,” the final film in the original series begun in 1977, and the next big-screen “Star Wars” flick.

Several “Star Wars” projects are in the works, including a trilogy by David Benioff and D.B. Weiss, the creators of HBO’s “Game of Thrones,” and a separate trilogy by “Last Jedi” director Rian Johnson.

A spokeswoman for Disney, contacted by AFP, did not offer additional details about the upcoming scheduled films, which will expand upon the cinematic universe created by George Lucas.

In September last year, Disney CEO Bob Iger admitted after the lackluster performance of “Solo: A Star Wars Story,” a one-off film in the franchise, that the “Star Wars” release schedule was too frenetic.

“I made the timing decision, and as I look back, I think the mistake that I made — I take the blame — was a little too much, too fast,” Iger told The Hollywood Reporter last year.

Meanwhile, the studio pushed back its plans for the next films in director James Cameron’s uber-successful “Avatar” franchise — one of the biggest prizes for Disney in the Fox merger.

“Avatar” remains the top-grossing film of all time, with $2.79 billion in worldwide box office sales, but superhero extravaganza “Avengers: Endgame” is hot on its heels at $2.24 billion and rapidly climbing.