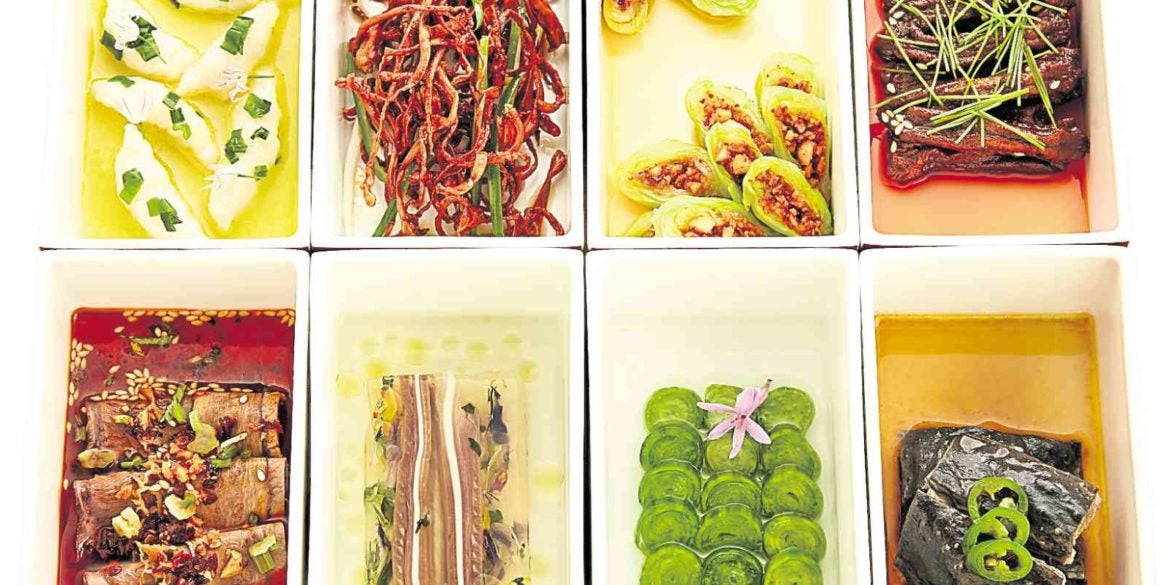 Buddha Jumping Over the Wall—Macau bets on world-class dining

As a member city of the Unesco Creative Cities Network (UCCN) in the field of gastronomy, Macau has been investing on its F&B industry to drive sustainable urban development and cultural vibrancy.

For instance, two-Michelin-star Golden Flower in Wynn Macau is a celebration of the life of Tan Zongjun, a Qing dynasty official who developed a school of cooking that paired the best of northern and southern China.

Not to miss is barbecued suckling pig filled with minced shrimp and topped with caviar.

To go with the meal, there are 40 specialty teas from China selected by the restaurant’s tea sommelier.

Adding prestige to the roster of chefs in the Wynn Palace kitchen is Andre Chiang, culinary director of Sichuan Moon, which opened only last March.

The multi-awarded Chiang focused on Sichuan as it has 24 interesting flavor profiles, he says.

Chiang has also put a spin on a number of traditional Chinese favorites like the mapo tofu with four different types of handmade tofu: black, Japanese egg, tender, and aged tofu.

Also on the menu: Peppercorn-Flavored Duck Foie Gras and Mushrooms Royale. He blends foie gras with cream and steams it at a low temperature until the surface of the foie gras gets slightly grilled. It is then topped with a layer of Sichuan pepper jelly.

What makes this dish truly special is his use of rare Sarcodon Aspratus mushrooms from Yunnan.

The menu is remarkable. It has over 150 dishes including live seafood delivered daily and cooked different ways. The traditional Guangdong dish, stir-fried lobster with egg, minced pork and black bean, gets a twist with the addition of tempeh.

The dishes require time and extra care to prepare. An example is the Buddha Jumping Over the Wall, one of China’s most popular dishes.

The dish’s name was given by a poet, who believed such an instance would happen once he catches a whiff of the fragrant, meat-based dish. It takes three days to prepare and is served in three bowls over a span of an hour. To guarantee consistency, it is served only to a minimum of six guests per table.

The suckling pig filled with fried rice and preserved meat requires 14 days prep time. Guests then have to wait for 40 minutes for the dish to be served. The combination of fragrant fried rice and crispy pork is a favorite two-in-one meal.

The Eight is also known for its intricate dim sum. There are 40 to choose from—including goldfish-shaped steamed dumplings with shrimp harvested once a year; hedgehog-shaped crispy barbecued pork buns; and purse-shaped puff pastry with river shrimp.

If you’ve had your fill of Chinese cuisine, consider the highly regarded Robuchon au Dôme in your dining itinerary.

Awarded three Michelin stars for nine consecutive years, the restaurant in the Grand Lisboa Hotel by acclaimed chef Joël Robuchon has one of the most extensive wine collections in Asia with over 16,800 labels.

Located in the dome of Grand Lisboa Hotel, Robuchon au Dôme offers a magnificent view of Macau. Inside, the crystal chandelier, made of over 130,000 Swarovski crystals, hangs in the middle of the ceiling.

Its splendor is complemented by a grand piano by the entrance, and Baccarat floor lamps. —CONTRIBUTED