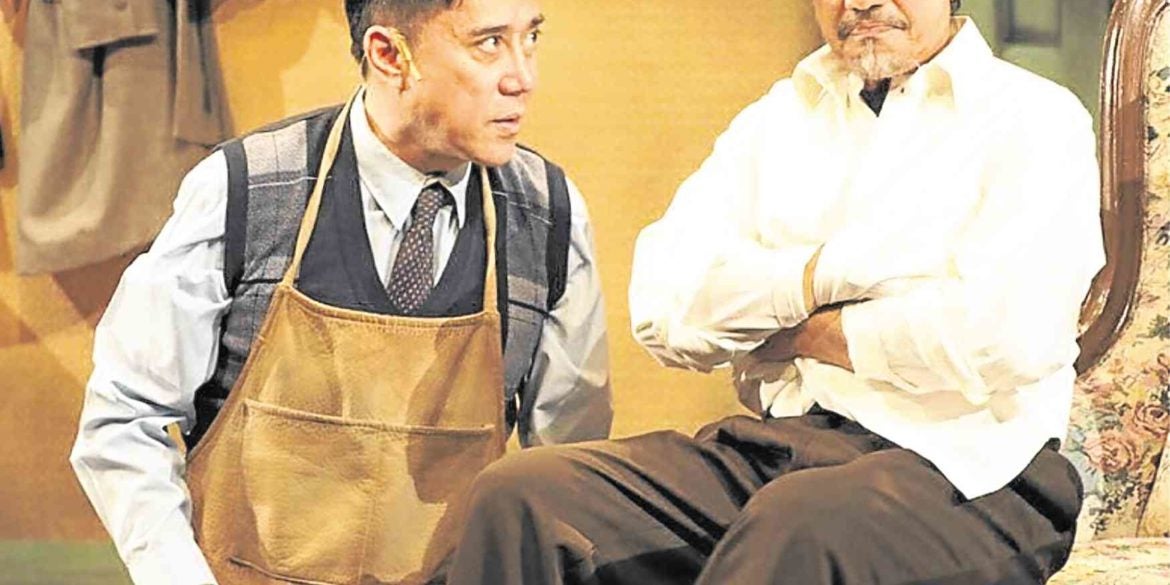 Audie Gemora and Teroy de Guzman in “The Dresser”

Rep’s ‘The Dresser’: When two theater titans face off

Admittedly, the main draw of Repertory Philippines’ “The Dresser” is watching two leading men of Philippine theater, Audie Gemora and Teroy Guzman, play off of and against each other.

In his younger years, the former was justifiably known as the prince of musical theater, and the latter has carved a niche in performing Shakespearean parts.

The material itself—Ronald Harwood’s “The Dresser”—was something these two gentlemen could sink their acting teeth into. The tale of a has-been theater titan (Guzman) and his meek, devoted assistant (Gemora) practically positioned the two characters, and the actors who would play them, in close quarters.

Harwood’s play also explored themes that are dear to any thespian’s heart. The contrast between an actor’s seemingly confident visage and the real insecurities that torment him in solitude. The encroachment of old age and death and the regrets they can leave behind. An all-too-ill lion (again, Guzman’s character, simply referred to as “Sir”) growling against the winter that is about to claim him. All these juxtaposed amid air raids breaking out without warning in World War II London, threatening not just to kill Sir and the ragtag touring theater company he leads, but civilization itself as embodied by the theater world he loves.

Greenbelt 1 Onstage’s usual modest size opens up to become a cavernous hall that shows us the decrepit backstage of an auditorium. The dressing room that Sir and Norman, his dresser, occupy is the only one lit, a bulb amid the metallic worn pipes and gray walls that threaten to break in.

This delicate balance is upset, and powerfully so, once Sir and his actors stand behind the wings of the stage before showing themselves off to the watching audience. The lighting, barely shining on their faces as they wait for their cues, and then crackling as the sounds of the invading German planes come in, hint of a grander world out there, but one that may soon be lost.

It is a peek into a future that Sir, in his last tour as King Lear, knows and fights. Guzman does a marvelous turn of raging against the light. His proud face and expressive eyes scream defiance for minutes, and then buckle down in defeat once he is alone.

His transformation into Lear is a rare dramatic turn that distinguishes all the personas he plays on the stage, drawing a thin line between Guzman the real-life actor to Sir the onstage actor to Lear the character he plays.

Gemora also pulls off a surprisingly convincing performance in the more subdued role. The actor who has played literary geniuses, navy captains, lion kings and Machiavellian plotters (among others) has to fawn over his master at all times, save him from his own stupidity, and defend him even when he is blatantly wrong.

The challenge here for any actor is how to win the audience’s empathy without overshadowing Sir. At the same time, aside from his obvious love for his boss, he has to keep the audience guessing at the other unexpressed reasons that have made him stay with him for decades.

Gemora pulls it off in spades with his questioning vulnerable eyes, tremulous voice, and quiet iron strength that belies any notions he is a mere wimp.

Guzman and Gemora lure in the attention of the audience every time they are on stage—but only in so far as they act alone or when they interact with the other supporting characters. It is a mystery why the two do not sizzle or spark when they are on stage together.

The combination of two veteran thespians playing dramatic tennis with Harwood’s ball of wit and drama is the main drawer to this play. Individually, Guzman and Gemora can throw and juggle that ball like star players—but together on opposite sides of the court, it’s like the ball is not moving and the two men are encased in their own separate bubbles.

The mystery increases in watching them interact successfully with the other actors in the ensemble, real-life and onstage.

Harwood’s second act has the other characters baring their souls to their boss as they sense the end. Missy Maramara wings it as the long-suffering but still spitfire younger wife.

But the ones who do steal the show in this act are Tami Monsod and Jaime del Mundo. Monsod’s loyal caustic stage manager finally reveals an unrequited if silently acknowledged love, and Del Mundo’s stumbling jester is simply a second-rate actor who is only too glad to be given a second chance.

All these supporting characters, along with Jeremy Domingo and Justine Narciso, essay their parts well and come together seamlessly as a fictional ensemble. This writer’s sole quibble is their inconsistent British accents. But they come to vibrant life when they trade barbs and exchange confessions.

The aforementioned lack of chemistry between the two leading men is thus baffling and admittedly disappointing. The emotional pace between Sir and Norman slows down once they start conversing with each other, literally grinding to a numbing halt at the end.

The last scene where the two finally become near equals could have been played as a final “Death, be not proud” moment. Unfortunately, as one member of the audience described it that weekend, the climax of the play ended in a whimper.

This writer can only wonder how the play would have culminated dramatically if those annoying bubbles around Guzman and Gemora were to finally break. —CONTRIBUTED

“The Dresser” runs until May 26 at Onstage Theater Greenbelt 1, Makati City, with performances Friday-Saturday at 8 p.m., and Saturday-Sunday at 3 p.m. Ticketworld tel. 8919999, ticketworld.com.ph