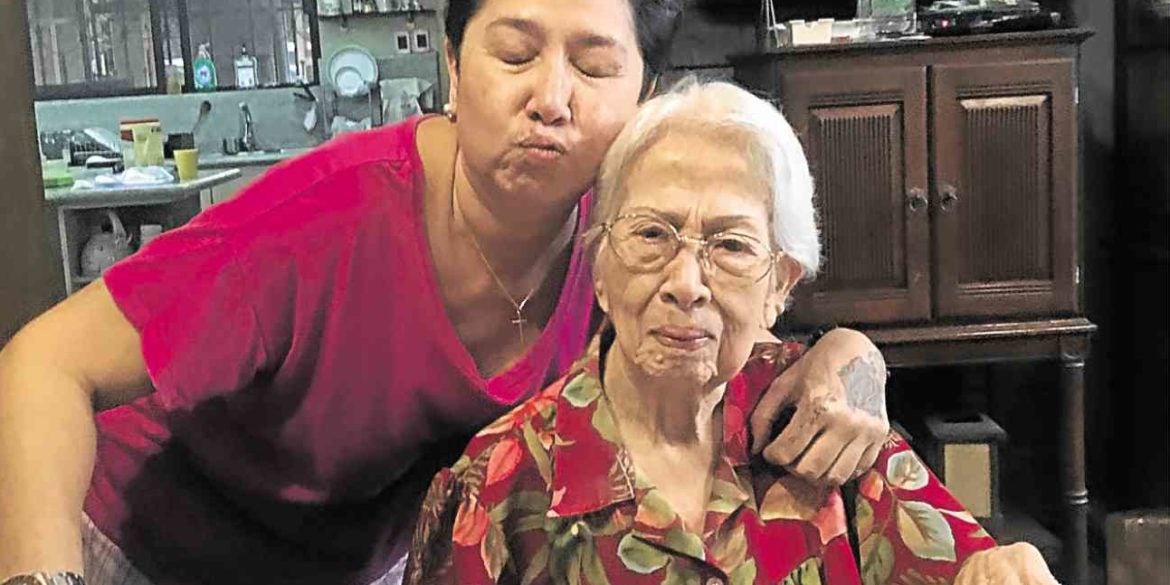 She’s picky about her food, whines at bath time, and needs a diaper change several times a day. We stock her baby shampoo and lotion, and hold her hands when she walks, as she wobbles, and could fall and hurt herself. In short, we baby her—my 94-year-old mother.

She’s doing quite well for her age. She can still carry a conversation, although she’s now hard of hearing and has difficulty enunciating her words. Even our shared cardiologist marvels at her laboratory test results, and has maintained her on the same medicines she’s been on for over 15 years. (Mama actually outlived her first cardiologist!) The doctor’s advice: “Let your mom eat whatever she wants!”

It’s a cause for celebration, having a parent live this long. But let me be honest: It has its dark side. More than the constant and exhausting care, it is seeing the formidable person who gave you life, raised you, cared for you, and yes, caused you pain, deteriorate into a child herself—gradually losing control of her faculties and senses, unable to take a step on her own.

The woman who carried me now needs me or her yaya to lift her, like a toddler, to her feet, her shrunken body almost limp in our arms.

Mama fought the decline hard, and it was a bitter pill for this strong woman to swallow. (She did, after all, outlive her husband and three of her six children.) She was relatively independent until she was 89, and strongly resisted any attempt to get her a yaya. This was even as she was forgetting where she put things, impatiently searching for a kitchen utensil, or a letter, or her glasses.

It didn’t help, as well, that ours was a difficult relationship from my adolescence. I was a Daddy’s girl, and have remained so even after my father’s death in 1983. While he was my confidante and supporter, Mama was the designated bad guy, the one who gave me a curfew, frowned on parties, and showed displeasure when I didn’t get good grades.

Later in life, we were such polar opposites, I found myself resenting her deeply, even as she tried to exert greater control over me after Daddy’s death. She remained in denial throughout my bouts with clinical depression, and didn’t quite grasp the gravity of my cancer diagnosis—ironic, since it was my relationship with her that I needed to thresh out in therapy.

One day, when I had stepped out and the cleaning lady had left for the day, she fell on her butt on the floor and was unable to get up until I returned—over an hour later. Another time, when she tried to walk after I had left the room and warned her not to, she fell again, this time hitting her head, requiring a frantic trip to the emergency room and stitches. Finally, she once became delirious and temporarily incontinent, and was hospitalized for five days for pneumonia.

After that, Mama couldn’t argue any longer; I was fortunately able to find a full-time yaya referred by a friend. Dang was an immense help from the get-go, and she deserves a medal for perseverance and patience despite Mama’s illogical attempts to make her first year with us miserable.

Mama would be angry, irritable, constantly glaring at Dang and insisting we find a replacement (although she couldn’t really say why). Like most women her age, my mom belonged to a time when the boundaries between house help and “masters” were clear and inviolable; she would be aghast when I shared special food or other items with Dang, and accused me of taking the yaya’s side in arguments.

The turning point was when I asked my brother to talk to her. My kuya is Mama’s hands-down favorite, and has always been gentle with her. We finally agreed that Mama needed a serious lecture, and my brother gave her one, specifically about treating her own yaya better.

The change in Mama was palpable and immediate (maybe from the shock that her baby boy could actually get mad at her, too). After she had another close call with a bad cough and cold, I came home from a three-week trip to find my mother now completely incontinent and unable to walk on her own (and to her credit, Dang carrying out the doctor’s orders to check Mama’s blood pressure and use a nebulizer!).

Suddenly, Mama had become too weak to resist any help, and was surrendering herself completely to our care without a whimper.

My own turning point was when I finally let go of all the resentment I had for my mother for years. It was the first time she soiled herself during Dang’s monthly weekend off, and there was only me around to do the job. It was a proper mess, and as I felt the panic and irritation welling up inside me, I prayed for grace—and I got it.

As she sat there looking immensely mortified, she asked meekly, “Will you be the one to clean that up?” My heart broke, and I answered in my gentlest voice, “You did it for me, why shouldn’t I do it for you?” It helped that my dog Kiko relieved the tension (as dogs do) by sniffing at the mess. I yelled, “Kiko, leave that alone. That’s Lola’s poo—go make your own.” That made my mother laugh in relief.

Today, we live with a virtual baby. Mama wrinkles her nose when she doesn’t like what’s on her plate, and has lost her liking for old favorites, like croissants and olives. She sticks out her lower lip when we scold her for not finishing her food, but her eyes twinkle when a great-grandchild kisses her (she’s their “Lola-Lola”), or when I promise to buy her halo-halo for pasalubong. My brother just has to say “Boo!” to make Mama giggle like a child.

On a big calendar across her bed, we draw circles around her alternating bath days, as she likes to insist that she took a bath yesterday. (Dang is always gently threatening my mother, like a proper yaya, with, “Hala, Lola, isusumbong kita kay Ma’am!”)

My life inescapably involves buying two flavors of Ensure, bed pads and diapers, planning visits to the doctor, and stocking up on what Mama still likes to eat. I make sure she smells and looks good; Dang has an arsenal of colognes, lotions and baby powder. We keep her entertained with television (although she can no longer tell you what she’s watching) and the newspapers I bring home for her, which she reads from cover to cover, occasionally commenting on familiar faces.

I am finally able to do all this because I want to, after years of railing against my responsibility. (I am, after all, an only girl and the only unmarried child left—the logical choice?) Late last year, I moved back in permanently with my mother, and rented out the flat where I spent half of my time.

My brother and I kid her a lot to make her laugh, and she is happiest sitting and watching the family talk at the dinner table. It’s important that we keep her happy; our cardiologist has said that a valve in her heart is no longer working, and surgery is out of the question, so we have to make every moment count.

One day, on another of Dang’s weekends off, I was holding Mama’s two hands and walking backward, as she kept her eyes on her feet. It struck me that Mama was now completely dependent on me. It wasn’t just that I had to wash her, change her diaper, or give her a bath. I realized that if I let her go, she would fall and die—simple as that. My mother’s life, at that moment, was completely in my hands.

It was an overwhelming realization. Then Mama looked up, wrinkled her nose, and stuck out her tongue.

We’ll manage, my well-loved 94-year-old baby and I.