The core message of Fatima is repentance and prayer | Inquirer Lifestyle ❮ ❯ 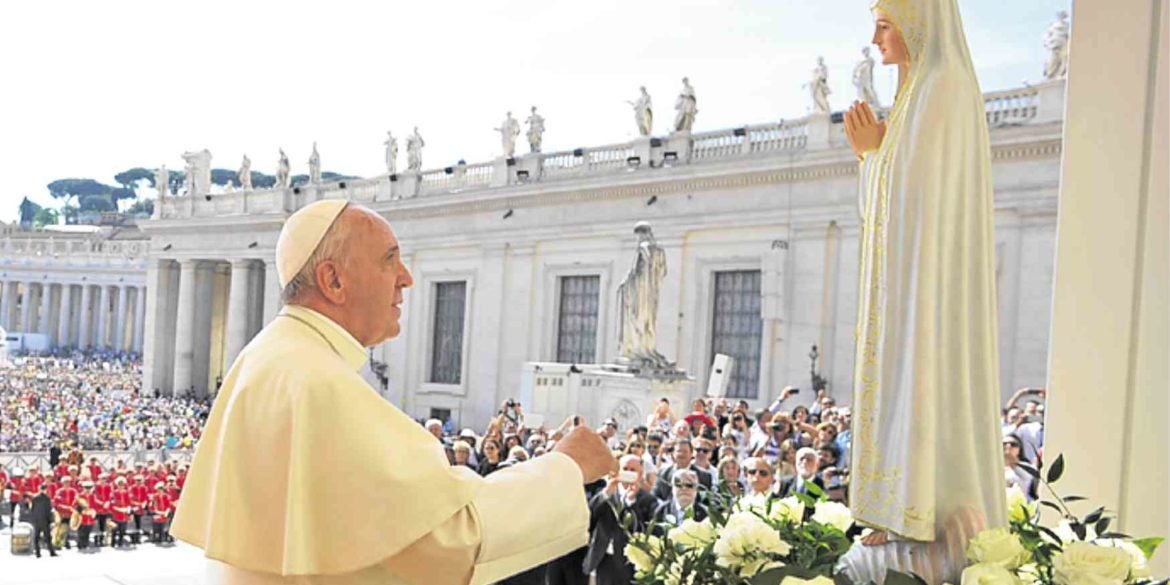 Pope Francis prays in front of a statue of Our Lady of Fatima during his general audience in St. Peter’s Square. —CNS photo/L’Osservatore Romano, pool

The core message of Fatima is repentance and prayer

Tomorrow, May 13, marks the 102nd anniversary of the apparition of Our Blessed Mother in Fatima. To honor this event in our Church and human history, and today being Good Shepherd Sunday, I will share and reflect on the story of our devotion to Our Lady of Fatima and the devotion of three shepherds of the Church to her, Popes John Paul II, Benedict XVI and Francis.

Apparitions of Our Blessed Mother have become a source of devotion and spiritual renewal through various eras in history and across the world; Our Lady of Guadalupe in Mexico in 1531, Our Lady of Lourdes in France in 1858, and Our Lady of Fatima in Portugal in 1917.

Apparitions are experiences that remind us and lead us back to the Cross and Resurrection. The historical context of the 1917 apparitions of Our Lady of Fatima is important to best appreciate the meaning and power of the apparition.

For centuries, Portugal was one of the most devout Catholic countries. In the 18th century, antireligious ideas and sentiments started to creep in and by the early 20th century the government had de-Christianized the country, exiling and/or imprisoning priests and bishops, closing seminaries, confiscating church properties.

In the midst of all this, in 1916, an angel appeared outside the tiny village of Fatima to shepherd children while they were tending their flock. The three were Jacinta, 7, and her brother Francisco, 9, and their cousin Lucia, 10.

In her 1976 memoir, Lucia wrote about the angel’s greeting when he first appeared: “Do not be afraid. I am the angel of peace. Pray with me.” He appeared to them two more times in 1916.

Then on May 13, 1917, a lady in white appeared to the three children. She asked them to pray the rosary and to return every 13th of the month for the next five months. The three children faithfully returned to the place every month, except on Aug. 13 when they were imprisoned by government officials.

It was during these monthly apparitions when Our Blessed Mother revealed more and more of God’s message. We often associate this message with the secrets of Fatima and focus on its apocalyptic nature but we must not dismiss the core message—the call to repentance and prayer.

Cardinal Ratzinger, before he became Pope Benedict XVI, refers to Our Lady of Fatima’s message as an “exhortation to prayer as the path of ‘salvation for souls’ and, likewise, the summons to penance and conversion.”

He reflects on Our Lady of Fatima’s most famous utterance, “My Immaculate Heart will triumph.”

Pope John Paul II, who was shot by Mehmet Ali Agca on May 13, 1981, at close range in St. Peter’s Square, is believed to be the Pope who will suffer referred to in the third secret. The Pope was hit by two bullets in his abdomen, but luckily no major organs were hit. A bullet missed his heart and aorta by a few inches.

In his visit to Fatima, where he placed one of the bullets inside the crown of the image, Pope John Paul II said, “It was a mother’s hand that guided the bullet’s path.” As he went close to the image to place the bullet, he uttered in prayerful reverence, “You saved me. You saved me.”

On May 13, 2015, the 98th anniversary of the apparition, Pope Francis addressed Portuguese-speaking pilgrims: “Entrust to her all that you are, all that you have, and in that way you will be able to become an instrument of the mercy and tenderness of God to your family, neighbors and friends.”

Pope Francis’ special devotion to Our Lady of Fatima stems from the fact that it was on the 75th anniversary of her first apparition in 1992 that he received the formal communication from Pope John Paul II of his nomination as auxiliary bishop of Buenos Aires.

Among all the apparitions of Our Blessed Mother, Fatima is the one most intertwined with sociopolitical events in the Church and in the world.
Our faith, prayer and reflection must lead to action that will make our world—in our particular time and context—a better world.

As in the story of Pope Francis, perhaps it is not a coincidence that tomorrow, the 102nd anniversary of the first apparition of Our Lady of Fatima, we are called to exercise our right and duty to charter the course of our nation’s future by voting wisely and spiritually, to think and pray as we choose our leaders.

I believe our country has a mission in the course of Church and human history. We are the only majority Christian country in Asia. We are the country that witnessed to the world that political change can be won through nonviolent means, and genuine people power, organized, guided and inspired, can do good.

But all of these remain unfinished. Regardless of our political color and affiliation, we can all agree that we need to finish the revolutions of 1898 and 1986 to bring genuine freedom and democracy to majority of our people.

Let us pray today for tomorrow, that the Risen Lord inspire us and our people to choose leaders, shepherds after his own heart and spirit. —CONTRIBUTED