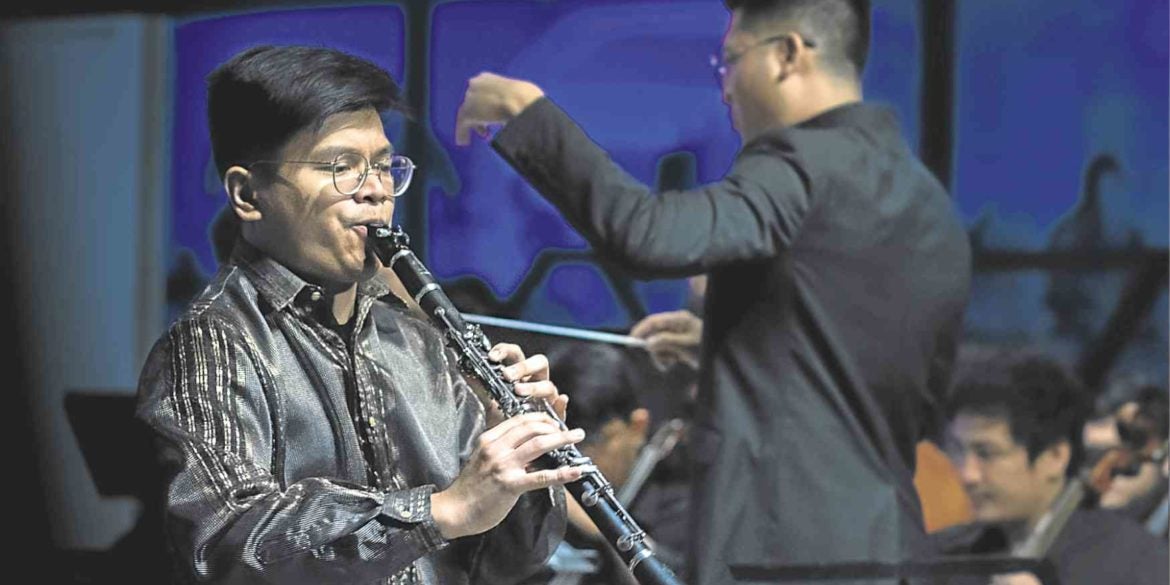 Clarinetist Andrew Constantino delivered an exemplary graduation recital with his electrifying rendition of Copland’s seldom heard Clarinet Concerto at the University of Santo Tomas (UST) Museum of Arts and Sciences on May 7.

Constantino performed with an ensemble composed of his musician friends under the baton of Derrick Atangan.
With the concerto’s unconventional structure, it was a tough challenge performing a difficult piece written by America’s towering figure in classical music.

Constantino defined his remarkable musicianship, making an astounding transition from slow to fast movements and delivering a solid cadenza. You can hear the Latin American influences in this jazzy part made crispy by its brilliant soloist and a highly inspired ensemble.

Before the Copland finale, Constantino, with collaborating artist Mary Anne Espina, opened with Giovanni Mattaliano’s Zeta World followed by a highly edifying reading of Mozart’s Trio in E Flat major, K498 and Brahms’ Sonata for Clarinet and Piano No. 2, Op. 120.

Using a Buffet Crampon BC20 clarinet first used in the 1960s, the young clarinetist admitted it was tough reading the concerto as he had to make sure he was treading on the right interpretation.

“For me, the difficult part is the flow of the melody which should sound bittersweet and the intervals of every note from high to low and back which are tough for the clarinet,” said Constantino. “High notes are also tough to play because you must play them elegantly with no unpleasantness to the ears. The real scary parts are the tempo changes and keeping the intensity and excitement of the piece. I am glad the audience liked it.”

The big challenge was shifting from Mozart to Brahms and on to the technically demanding Copland concerto.

“For Mozart,” he said, “you must play it light and relax and right after that; for Brahms, you must play it with dark and pure emotion. Copland is the combination of the two periods and thus one has to add a 20th century sound. It is just like travelling from one era to another and giving your audience a taste of classical, romantic, and contemporary music.”

After finishing his Bachelor of Music Major in Clarinet Performance at the UST Conservatory of Music, Constantino is scheduled to tour with the Asian Youth Orchestra July to September 2019.

His teachers are professor Ariel Sta. Ana and Leif Garret Concepcion from the UST Conservatory of Music. —CONTRIBUTED