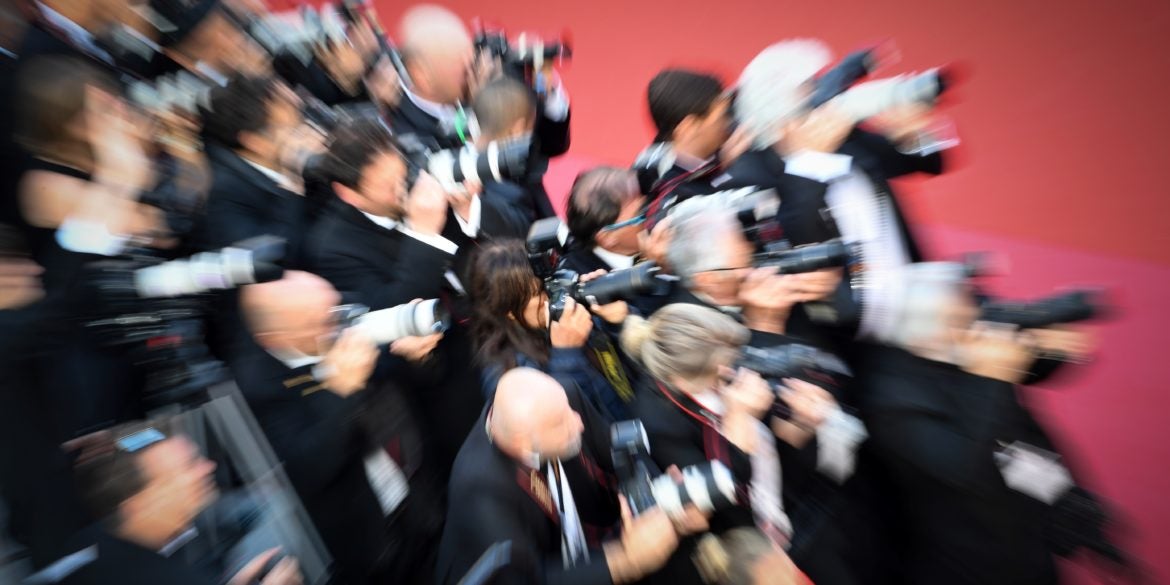 Press photographers take photos on May 13, 2018 as guests arrive for the screening of the film "Sink Or Swim (Le Grand Bain)" at the 71st edition of the Cannes Film Festival in Cannes, southern France. (Photo by Loic VENANCE / AFP)

The Cannes film festival in numbers

For 12 days starting Tuesday, the Cannes film festival will be a non-stop merry-go-round of movies, stars, interviews and parties. Here are some figures to put the event into perspective:

276 The length in minutes of “Ang Hupa,” the longest film at Cannes, by the Filipino director Lav Diaz — at four hours 36 minutes. It is followed closely in the “slow cinema” stakes by the “Mektoub My Love: Intermezzo”, the second part of a steamy trilogy by the French-Tunisian Abdellatif Kechiche, who won the Palme d’Or with “Blue is the Warmest Colour”. But they are mere shorts compared to the all-time Cannes record-holder Ken Burns, whose documentary on World War II — later broadcast as a series — ran to 14 hours.

0 The number of times Cannes regular Pedro Almodovar has won the Palme d’Or. Having served as head of the jury in 2017 the Spanish auteur consoles himself with the knowledge that the best film does not always win. “Even the year I was president, there were prizes I didn’t agree with,” he said on the eve of the festival. He will be hoping he breaks his duck this year with “Pain & Glory” featuring his stalwart stars Antonio Banderas and Penelope Cruz.

24 The number of steps the stars have to climb to ascend the red carpet into the Palais des Festivals where the main competition films are screened.

1,800 The length in metres of the red carpet that will be rolled out during the festival — just over 1.1 miles. A new carpet is laid before each official screening of a film in competition.

500 The number of security personnel deployed at the Palais des Festivals — not counting the hundreds of police, soldiers and paramilitary gendarmes patrolling the surrounding area.

40,000 The number of people with official accreditations to attend the festival, of whom around 4,500 are journalists.

20,000,000 The festival’s budget, in euros (about $22 million). Half the funding comes from French taxpayers, the other half from corporate sponsors.

62 The number of feature films — from 25 countries — screened in the official selection at the festival, 21 of which are competing for the Palme d’Or. Hundreds more are showing in the parallel sections and in the market.

468 Smile, there are cameras everywhere (and not just movie and TV ones). This is the number of surveillance cameras filming the town 24 hours a day, with lenses especially trained on the Palais des Festivals building and all along the seafront, known as La Croisette.

13,000 The number of movers and shakers taking part in Cannes’s parallel film market, happening in the bowels of the Palais des Festivals and along part of the beach.

This maze of stands is where producers, directors and distributors get together to work out what you’ll be watching on the big screen and your devices in the months and years to come.